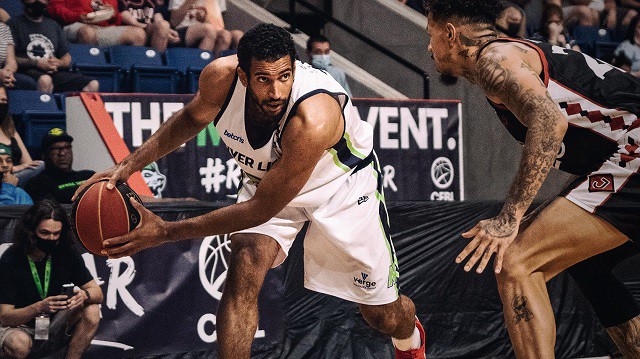 It seems on-brand for that the ever-adaptable Niagara River Lions will have a first-time playoff matchup in the Canadian Elite Basketball League’s championship weekend.

The River Lions wrested the No. 2 seed and all-important bye into the semifinal after the brother act of athletic wing Tommy Scrubb and shooting guard Phil Scrubb, along with Brampton-raised big man Olu Ashaolu, stepped into the breech after three players departed after earning NBA Summer League opportunities. Niagara, 10-4 in the CEBL regular season, had a distinct possibility of meeting their QEW rival, the Hamilton Honey Badgers, in the playoffs for the third consecutive season.

In both 2019 and ’20, Hamilton ousted Niagara by narrow margins.

However, Hamilton was upset 96-94 at home last Saturday by the Ottawa BlackJacks, who were the lowest seed in the playoffs. So now, Niagara will face the Fraser Valley Bandits in the early semifinal on Friday night (Aug. 20, 7 p.m., cbcsports.ca, CEBL+, Twitch). The host and defending champion Edmonton Stingers will host Ottawa in the second semifinal.

The championship game is on Sunday at 4 p.m., and will be broadcast coast-to-coast on CBC, in addition to being on the other aforementioned platforms.

The Scrubb siblings were not with the River Lions for the season series with Fraser Valley, where the teams traded decisive home-court wins. The Bandits won 104-81 at home on June 29, with the River Lions earning payback with a 103-82 win at the Meridian Centre in St. Catharines on July 8.

Gilbeck, oddly enough, fouled out in both games.

River Lions forward Javin Delaurier, who led the league in rebounding at 11.3 per game, is playing for the Atlanta Hawks entry in the Summer League. Guard Xavier Sneed has been with the Charlotte Hornets, and forward Tyree White is on the Milwaukee Bucks squad. The Summer League wraps up on Tuesday.

The CEBL also announced Monday that it will add at least one expansion franchise in 2022 with the addition of the Scarborough Shooting Stars, which brings the league to an even eight teams. Scarborough will play its first season at the Goldring Centre on the University of Toronto’s main downtown campus.