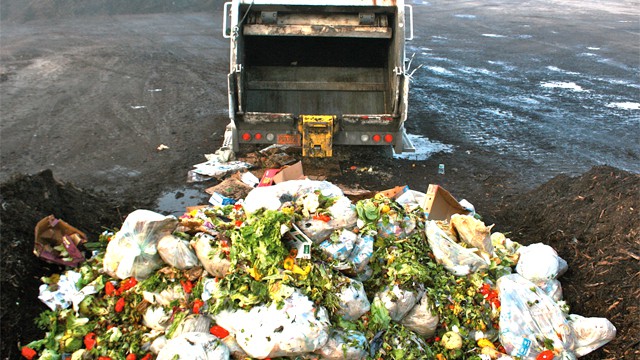 With tons of wasted food in Peel region, it’d be ideal if Mississauga responded with a solution.

According to an audit by the Region of Peel last year, Peel wastes food daily. People in the region dispose of tons of edible food from all food groups (meat, vegetables, dairy products, eggs, bread). Not rotten food that went sour, but actual edible items that were just casually disposed of.

The audit shows that 40 percent of food thrown out is avoidable food waste.

There are a lot of innovative solutions to pressing issues that Toronto takes initiative on, models that would do well to be implemented in Mississauga, in this case, to avoid food waste.

Now, Flashfood, a mobile app allowing grocery locations to sell surplus food directly to consumers at a massive discount prior to discarding, has partnered with Longo’s in downtown Toronto for a 3-month beta to reduce their food waste.

Those who have the Flashfood app can see deals on good surplus food on their phone, within three days to a month until the best before date, at massively reduced prices.

With mass amounts of the population in Peel struggling to even afford a home, saving money on groceries and reducing food waste would be useful for our wallets, the planet, and our stomachs alike.

“We want to fundamentally change the way grocery chains are viewing their surplus food. Right now, perfectly good food is being thrown out well before the best before date. We’re providing our partners a profitable, seamless way to reduce the amount of food they discard while also making food more affordable for our users,” said Flashfood founder and CEO Josh Domingues.

Users are notified on their phone when new deals are available, pay through their phone, and pick their purchase up at the Flashfood zone in store on the same day. Flashfood users then check out just like they normally would while at the store.

The app officially launched in January with Farm Boy at their Beaverbook location in London, Ontario, a location that’s still running – the model is clearly working. Farm Boy even has plans to add more stores with Flashfood in the next few weeks in London, Ontario.

In terms of savings, in an analysis of the app, using Flashfood could give users up to $5,000 in savings annually.

“We’re working on ways to assist organizations and individuals who are dealing with food insecurity, we haven’t found the perfect solution yet, but we’re happy to work with any organization to help get food to anyone in need. There’s a solution and collectively we can get there,” said Domingues.

When food gets thrown out, it ends it ends up in a landfill, gets covered by other garbage and rots without oxygen, which produces methane gas, a leading cause of climate change.

In their partnership with Flashfood, Farm Boy and Longo’s have diverted over 1,500 meals from landfill. For context, that’s the equivalent greenhouse gas emissions to driving more than 1,800 kilometres.

Consumers have buying power, and with collective action, we can prove to grocers that throwing out perfectly good food is unacceptable.

Perhaps the Toronto and London flagships will inspire some change in Peel region.

Do you think this concept would work in Mississauga?