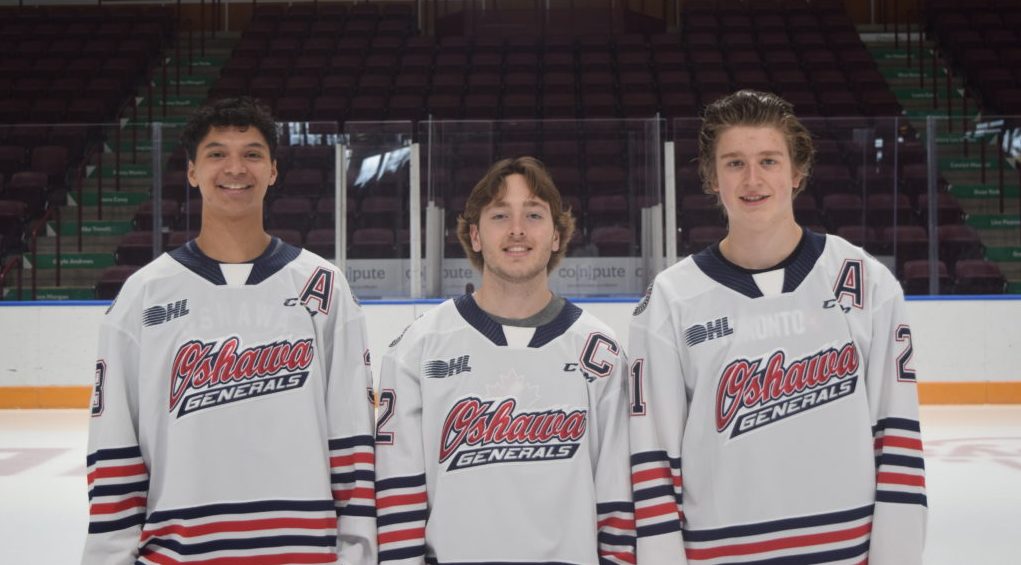 The small-but-mighty quarterback of the Oshawa General’s defence the past two seasons has been named captain of the storied junior hockey club, the tenth player to wear the ‘C’ since John Tavares in 2008.

Lleyton Moore, who was one of the OHL’s top defenceman last season with 54 points, will be joined on the team’s leadership group by alternate captains Calum Ritchie and Thomas Stewart, both entering their second season with the Generals.

Drafted in the 1st round, 12th overall in the 2018 OHL Priority Selection, Moore is skating in his third season with Oshawa. Last year’s 5-49-54 point totals made him an easy choice as the club’s Top Defenceman Award at the annual awards banquet.

Ritchie scored 19 goals and added 26 assists during his rookie campaign last season and has already represented Canada twice; last December during the Capital City (U17) Challenge in Ottawa (where he scored the winning goal in overtime for Team Black) and this summer at the Hlinka-Gretzky Cup (U18) in Red Deer (where he led all scorers and helped Canada to a gold medal.) Ritchie also shared the Top Rookie award at last season’s awards banquet

Stewart is entering his second season with the Generals after being acquired from the Barrie Colts at the beginning of last year. Last season Stewart had three goals and seven assists and impressed the coaching staff throughout the season for his hard work ethic and dedication. He took home the Fitness Award at the awards banquet.

In their final exhibition game before the start of the regular season, the Generals were at Iroquois Park Sports Complex in support of Whitby Minor Hockey and trounced the rival Peterborough Petes 5-0, thanks to Whitby Minor Hockey alumn Carter Bickle, who stood tall between the pipes for a 33-save shutout. Oshawa now enters the regular season on a four-game winning streak.

The Generals open their 2022-20223 season tonight on the road in Barrie against the Colts, before returning home for their home opener Saturday night against the Ottawa 67’s.