MiWay Service Updates Coming in May

The Mississauga Transitway opened with much fanfare a few years ago, when it was touted as Mississauga's own version of a 'surface subway,' operating as a dedicated bus lane alongside Highway 403. While it has been frequently used during rush hour traffic, the current stretch of the Transitway is only partially complete, running from Winston Churchill station in the west end across Mississauga to the Etobicoke Creek station just east off Creebank Road and Eglinton Avenue.

But as of May 1, the Transitway is getting closer to completion with the opening of two additional stations along Eglinton Avenue West where it intersects with Spectrum Way and Orbitor Drive. The final station, Renforth Gateway, will be open in the fall of 2017, finally completing the entire Mississauga Transitway across Mississauga.

There are also some additional changes across the general MiWay system starting May 7. 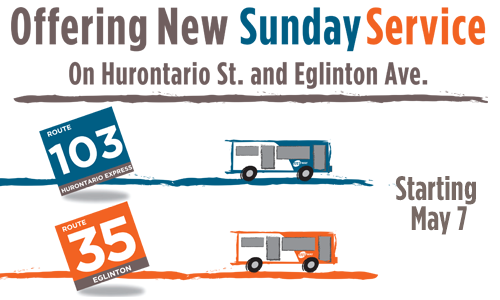 These changes come as part of the gradual rollout of Mississauga Transit’s 5 year plan ending around 2020 to modernize the bus transit routes to accommodate a more ‘grid like’ system, and utilizing more of the Transitway to connect more routes along the east-west corridor.