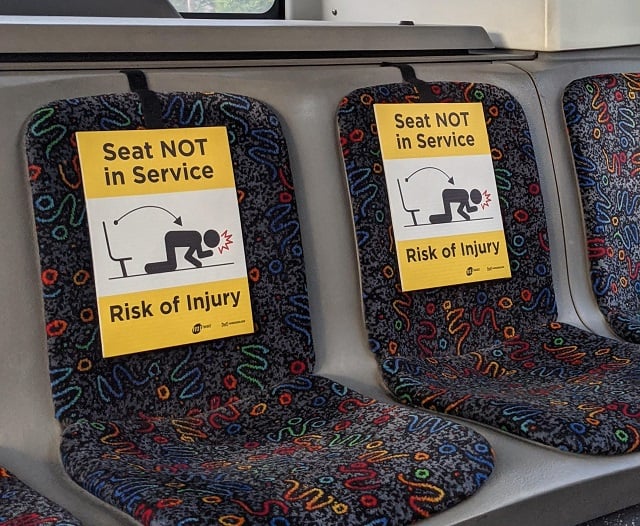 The wheels are going ’round and ’round, trying to figure out the explanation for why some City of Mississauga buses have signs stating that backrow seats are unsafe.

On Thursday, a user on the r/Mississauga forum on the news aggregator and discussion site Reddit posted a photo that showed that the two seats in the middle of the back row on MiWay base have been made off-limits. The signs read, “Seats NOT in service — risk of injury,” with an illustration of a stick figure falling forward on to the bus floor, with an illustration representing a head injury.

Bus operators occasionally do have to make sudden stops, often to account for careless drivers. There was speculation that a passenger might have been injured.

“Looks like someone sued after hitting their face when the bus driver slammed on brakes,” one user speculated. “I am just judging by the picture, though, I am not sure the real reason.”

Another Redditor noted the seats are higher off the floor than those in other rows.

“Perhaps (they were) not seated fully to the back of the seat,” they commented. “Also maybe leaning forward while using a device.”

MiWay has been operating buses at 100 per cent capacity since early August 2020, on the advice of Peel Public Health. It skips stops once a bus is full, according to info posted on the City of Mississauga website.