Can landlords enforce a 'no pets' policy in Hamilton?
‘It wasn’t called COVID at the time:’ One year since Canada’s first COVID-19 case
‘You don’t want to fall into that three per cent category’: Ontario ICU doctor on battling COVID-19
High-end chocolate seller Godiva will close Mississauga location
Three from Brampton charged in drug trafficking operation

While everyone knows that the days of $350K detached houses in Mississauga are long over (barring very special circumstances, at least), most know that you can spend significantly less than half a million if you're willing to sacrifice space.

That said, it looks like condos—the last bastion of affordable housing in Toronto and the GTA—are getting increasingly more expensive every month.

Recently, Toronto Real Estate Board (TREB) president Tim Syrianos announced that the average selling price for condominium apartments sold through TREB's MLS system was up by nine per cent year-over-year to $533,447 in the first quarter of 2018.

That means that, in the GTA overall, condo prices have officially surpassed the half a million mark (although there are units available for well under that in Mississauga and other 905 municipalities).

Condo buyers are also trapped in what's known as a seller's market.

TREB says that while the number of condominium apartment sales reported by GTA realtors in the first quarter was down by 29.7 per cent year-over-year to 5,084, so too were the number of new listings, which were down by 11.1 per cent annually to 8,030. 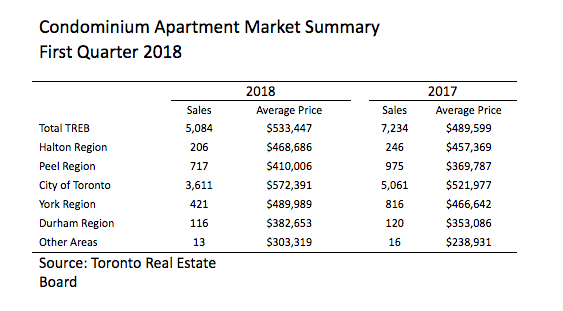 "Strong competition between buyers underpinned price growth well above the rate of inflation.  We expect the condo market segment to remain strong through the remainder of 2018 and over the longer term, as buyers continue to see ownership housing as a quality long-term investment."

TREB says that inventory levels for condominium apartments in the first quarter of 2018 were above the record lows experienced during the first three months of 2017.  However, with months of inventory continuing to trend between 1.5 and 2.0 months, market conditions remain very tight from a historic perspective.

"The condominium apartment market segment continues to have the lowest price point on average compared to other major low-rise home types.  It stands to reason that condos remain popular with first-time buyers," says Jason Mercer, TREB's director of market analysis.

"Strong demand relative to supply will see this segment perform well from a pricing standpoint for the remainder of 2018 and beyond."