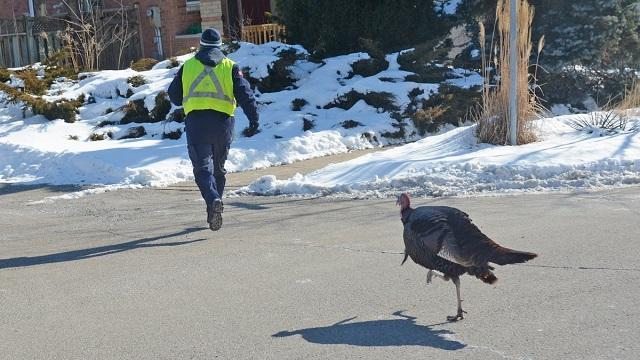 The wild turkey who became famous for chasing a Canada Post worker every day (and just being an all-around cool guy to pass by on the street from time to time) has apparently passed away after being struck by a vehicle.

While there is little doubt he is the victim of an egregious hit and run, we don’t think any sort of investigation will be launched.

On March 11, City Councillor Karen Ras took to Facebook to announce that Clarke, the famous Clarkson-Lorne Park wild turkey, perished after reportedly being hit by a car.

“Sadly, our resident wild turkey Clarke passed away today after being hit by a car on Lakeshore,” Ras wrote.

Ras said that, despite attempts to relocate him, Clarke often returned to the area where he was frequently fed.

In this case, it looks like thoughtful residents actually made life a little less safe for Clarke, even though that was never anyone’s intention.

“As much as we try to live in harmony with nature, when we interfere and feed them food, there is no incentive for them to leave and it becomes dangerous for the animals, drivers and yes, even our postal workers who were often chased,” Ras wrote.

“I would like to thank those residents who helped deter feeding and to the property owners on Silver Birch/Lakeshore for taking extra care to put up signs and discourage those leaving food on their property.”

@citymississauga, Wed. Mar. 6. Lorne Park. Wild turkey vs. postal worker. "He chases me every day," said the postie with a grin. Didn't have a chance to get his name as he sprinted away with the bird in hot pursuit. @cupw @canadapostcorp @CWF_FCF pic.twitter.com/nCjtzewDSF

Ras’ post echoes what the city has been saying about our new feathered friends for awhile.

“Birds may find their way into residential areas looking for food. These birds are good flyers and will find their way back to their natural area,” the city says.

Return of the wild turkey @citymississauga, thinking of crossing Lakeshore Rd. near Bexhill during rush hour. Concerned young woman tries to block him. Any chance of collaboration @CVC_CA @ONenvironment @MississaugaPF to remove to distant rural area b4 the bird gets creamed? pic.twitter.com/PmzXqeWmWp

Residents were asked not to feed the birds as it may put the bird or themselves in danger.

Past sightings include (perhaps the same?) wild turkey hanging out a bus stop on Lakeshore Road West last Thanksgiving, and this video of a man being chased by a wild turkey in Brampton.

RIP, Clarke. We’re sorry this happened to you.

If you see a wild turkey in Mississauga and you’re worried about its safety, contact Mississauga Animal Services.