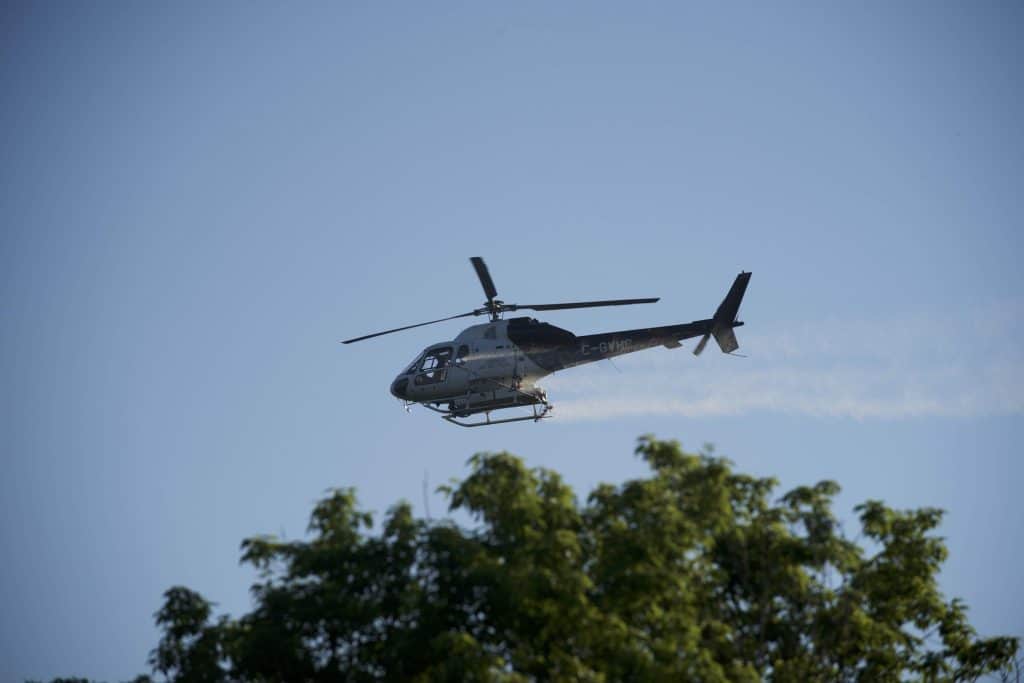 Mississauga’s aerial spray plan to save the city’s trees from an army of invasive, leaf-eating insects has wrapped up for this year.

Under the City of Mississauga’s Aerial Spray Program, low-flying helicopters sprayed areas of the city over several weeks earlier this spring, concluding their 2022 efforts on June 8.

Officials say the objective was to “target and manage” the leaf-munching caterpillars, which left unchecked can kill trees at an alarming rate.

Moving forward, City staff said today (June 22) at council that they’ll monitor the sprayed areas over the summer and fall to determine the effectiveness of the program.

Staff added that in the years to come, they’ll seek to fine-tune the program so, like Toronto, they can target more specific areas for the invasive pest each spring or every other spring.

Ward 2 Councillor Pat Mullin, whose area of south Mississauga was largely targeted for spraying, told her council colleagues and staff that she received positive feedback from residents.

“I received lots of emails complimenting staff for their efforts,” said Mullin, adding many residents said they are grateful that they can enjoy their back yards knowing the trees have been sprayed. “Staff did a great job with a challenging issue.”

Mississauga officials also encourage people living in spray zones to keep an eye on trees on their property for signs of LDD.

They say residents can help by:

Under the aerial spray program, the helicopters typically sprayed at about 5 a.m. and from 15 to 30 metres above the treetops in specific areas of the city plagued by the hungry bug. An interactive map provided by the City shows which areas were targeted.

The “gypsy moth” has been an unwelcome presence in Mississauga for years and it’s a serious threat to the tree canopy in several parts of the city as it eats oak trees and other hardwood species.

While the City has used other methods to control the population of the insect, aerial spraying has been determined to be the most effective weapon.

Mississauga forestry staff received $3 million in the City’s 2022 budget with which to stage this year’s aerial battle against the hungry pest.

The City last spray-bombed areas in 2018, which helped slow the LDD population for about two years. But within the past year-and-a-half or so, the tree-munching pest has returned in force in Mississauga and across southern Ontario.

The spray produces fine droplets that are small enough to stick to the leaves of trees. Btk is a naturally occurring bacterium found in soil and has been approved by the Pest Management Regulatory Agency, an agency of Health Canada, for aerial use over urban areas.

According to Health Canada, Btk treatment is considered low-risk to human health and the environment. It is only toxic in the caterpillar stage of the LDD life cycle and does not affect adult moths or butterflies.

Last year, it was determined the “gypsy moth” was also making a nuisance of itself in another way.

People who came into close contact with heavily-treed areas developed rashes, which were not serious in nature, but caused symptoms of slight stinging and itchiness for several days.

Native to Europe, LDD was introduced to North America several decades ago. The caterpillars eat leaves from trees during the spring and early summer.

While healthy trees can grow back their leaves in the same season, an ongoing infestation weakens trees and can make them more likely to be damaged from other insects as well.