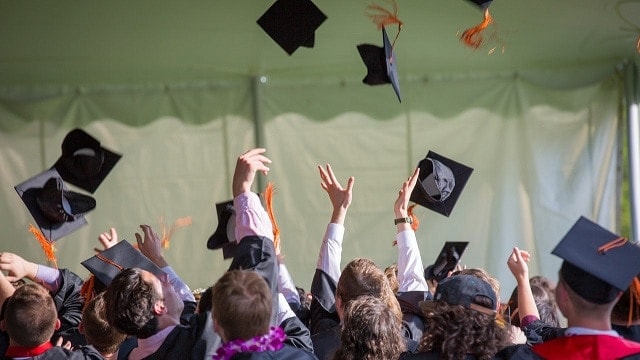 Graduation has been the topic of conversation between 17-year-old Anoosha Keshav and her friends for months.

After their last two years of high school were interrupted by the COVID-19 pandemic, the Mississauga teen and her peers crave a little normalcy to mark the end of this stage in their lives — not another pared down, online-only event.

“It comes up in almost every conversation,” she said. “The fact that it’s going to be a pre-recorded video you’ll have to watch, it’s really disappointing. It’s not motivational, you know, because we’re almost there at the end, and it’s really sad that this is how our graduation is going to be.”

So Keshav has come up with an alternative. She’s calling on the Ontario government to allow COVID-safe outdoor ceremonies, complete with physical distancing and personal protective equipment.

“This is something really important for us,” she said. “We do want to celebrate this milestone properly, especially considering that we have spent the entirety of our senior year in a pandemic and half of our junior year, as well.”

Keshav is not alone in her desire for an outdoor ceremony.

An online petition she started less than a week ago had garnered more than 9,700 signatures by Sunday morning. They come from people identifying themselves as students, teachers and parents.

“I would like to have at least one memorable Grade 12 experience,” one signatory wrote.

“This year has been full of disappointments, let’s not end on one,” said another.

For 18-year-old Nathalia Aranda of St. George, Ont., losing an in-person graduation would mean missing out on long-awaited — and hard-earned — recognition.

“When you leave high school, you’re not just leaving with a diploma, you’re leaving with other characteristics like honor roll, scholarships, and your future goals are announced. And I believe that it’s really significant for us students to get that recognition for all we’ve worked for,” said Aranda, who signed the petition on Saturday.

She said she’s been planning for her graduation ceremony since Grade 9, and had hoped to use it to pay tribute to her roots after moving from Colombia when she was younger.

“I really wanted to walk across the stage and hold up my flag just to show anyone can make it here,” she said. “And that’s really what my plan was. And now I kind of can’t do that because it is on Zoom.”

The push for in-person graduation ceremonies comes as Ontario continues to tackle the pandemic’s third wave, with the province extending a stay-at-home order until at least June 2.

Students across Ontario have been learning remotely for more than a month and it’s not yet clear whether they’ll return to the physical classroom before summer break begins, even as vaccination efforts ramp up.

The province is aiming to open up vaccination appointments to everyone 18 and up by the week of May 24, and it’s hoping to start vaccinating teens between the ages of 12 and 17 in June.

But it remains to be seen how many youth will receive their first dose of the Pfizer-BioNTech shot — the only one approved for use in minors — in time for grad ceremonies, which typically happen towards the end of June.

A spokeswoman for Education Minister Stephen Lecce said he’s looking into the feasibility of outdoor ceremonies.

“Ontario students deserve this positive conclusion to their academic journey, safely,” Caitlin Clark said in an email. “We are actively working with the Chief Medical Officer of Health on this in order to preserve these opportunities to proudly recognize the incredible success and achievement of our students.”

But some school boards say that even if the province gives the green light, it may be too late to organize an in-person ceremony.

The Dufferin-Peel Catholic District School Board, for instance, said organizing such events and keeping them safe present significant hurdles.

“If the stay-at-home order is ended, there would very likely be outdoor gathering restrictions in place that limit numbers. We have graduating classes that would be over 400 students,” Bruce Campbell said in an email, adding that Peel is among the biggest COVID-19 hot spots in the country.

“(The board) has made the decision, in consultation with our public health units, to go with virtual graduation events again this year.”

Peel District School Board made the same choice.

It’s been planning for virtual celebrations since February, using last year’s online-only ceremony as a template. That event featured recorded performances from students and alumni and was viewed by more than 10,000 people.

Keshav, however, feels there’s a distinct difference between this year and last.

“The class of 2020, its graduation was just a couple months after the pandemic started,” she said. “Now it’s been over a year, and since then, we’ve learned a lot. Organizers know how to make events different. There’s a lot of adaptations that can be made. I think doing a graduation now is a lot easier than it would have been last year.”