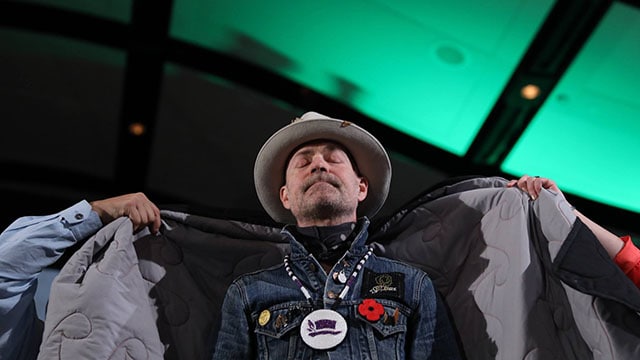 Early this morning, news broke that Gord Downie, the beloved frontman of the iconic Canadian rock band The Tragically Hip, succumbed to brain cancer after a lengthy struggle with the disease.

His family released a statement regarding his passing, letting fans and supporters know that the well-loved musician “quietly passed away with his beloved children and family close by.”

Although the news did not necessarily come as a shock–Downie bravely announced his terminal illness before The Hip’s final tour in 2016–many have been deeply saddened by his passing, including Prime Minister Justin Trudeau, who offered tearful remarks on his death earlier today.

Now, the City of Mississauga is looking to honour Downie’s memory by sharing his music with residents.

In response to a motion put forward by Councillor Chris Fonseca’s at today’s General Committee meeting, The Hip’s music will be played on the Upper Square in Celebration Square this afternoon and will continue until 9:00 p.m. this evening.

The clock tower will also be lit red at dusk (approximately 7:30 p.m).

“Gord knew this day was coming – his response was to spend this precious time as he always had – making music, making memories and expressing deep gratitude to his family and friends for a life well lived, often sealing it with a kiss… on the lips,” his family said in a statement.

“Gord said he had lived many lives. As a musician, he lived “the life” for over 30 years, lucky to do most of it with his high school buddies. At home, he worked just as tirelessly at being a good father, son, brother, husband and friend. No one worked harder on every part of their life than Gord. No one.”

Those interested in honouring Downie and helping others may also want to do donate to Sunnybrook Hospital’s Gord Downie Fund for Brain Cancer Research.

Downie is survived by his four children.