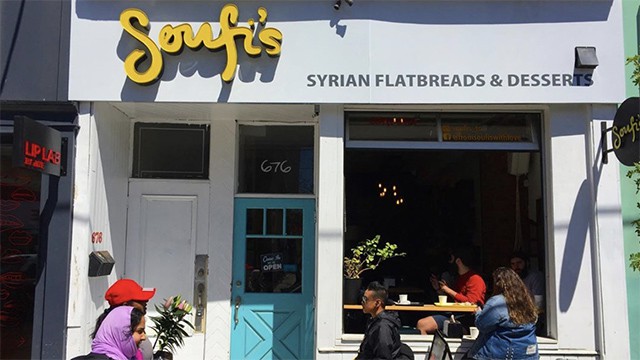 A Mississauga restaurateur known for both his philanthropy and his wildly successful chain of Middle Eastern restaurants had pledged to help a Syrian family reopen their restaurant after they shuttered it due to reported death threats.

The owners of Soufi’s, a Syrian restaurant in Toronto, announced they would be closing the restaurant permanently on Oct. 8 in the wake of “numerous hate messages and death threats.”

“As a result of numerous hate messages and death threats we’ve received over the past week, we’ve decided to permanently close our shop. Our decision is made with a heavy heart in effort to maintain our family and our staff’s safety,” owners Huam and Shahnaz Al-Soufi wrote in an Instagram post.

“Since we opened up Soufi’s in 2017, we have been met with nothing but curiosity, respect, acceptance and love from the people of Toronto, and for that we are eternally grateful.”

The backlash against the restaurant began when the Al-Soufi’s son was identified as one of the protestors who was involved in a confrontation with an elderly woman outside of a Maxime Bernier fundraiser in Hamilton.

Bernier is the leader of the far-right People’s Party of Canada (PPC).

After the Sept. 29 fundraiser, Hamilton police said they were looking into a video that showed an elderly couple being harassed by protesters. The video in question, which began circulating on social media shortly after the protest, showed a woman with a walker and a companion trying to access the PPC meeting at the Mohawk College McIntyre Performing Arts Centre.

The video showed protesters refusing to move out of the way and shouting at the couple.

CP24 reports that the Al-Soufi’s did confirm that their son, Alaa, was one of the protesters at the event. The couple has denied that he verbally or physically assaulted the woman.

“When I saw what was happening to the Al-Soufi family and to the restaurant and all the intimidation and the hate that they were receiving, I knew what that felt like. I spent two years of my life fighting hate,” Mohamad Fakih, the CEO of the Mississauga-based Paramount Fine Foods empire, told reporters on Oct. 10.

“What happened at the event was wrong and I completely disagree with it, but I don’t think their business should be closed. This is a thriving, celebrated business run by two incredible friends who are here beside me that immigrated to Canada like we all did.”

Fakih, a fixture in Mississauga’s business community, recently scored a legal victory against an anti-Islam activist.

This spring, a far-right figure and former Mississauga mayoral candidate was ordered to pay $2.5 million in damages after making defamatory statements about Fakih.

Fakih told reporters he reached out to the family after hearing about the abuse they were receiving.

“They came here four years ago and they created a business that many of you love. Yesterday I reached out to the family and I wanted them to feel like they’re not alone. I want to show them that I will stand beside them and we will all stand beside them, we’ve seen a lot of messages of love,” Fakih told reporters.

Fakih told reporters that, with support from Paramount, Soufi’s restaurant will reopen on Friday morning (Oct. 11).

“The Al-Soufi’s will maintain ownership and receive any profits. I don’t want anything from this other than making sure that this restaurant is open,” Fakih said.

After Fakih spoke, an emotional Huam Al-Soufi appeared before reporters to make a statement and take questions.

“Our decision to close down the restaurant came from a place of fear. In doing so, we hoped that the threats to our family and staff would dissolve and the hate messages would subside,” he told reporters.

Al-Soufi said the amount of support the family received in the wake of their announcement was incredibly encouraging.

“The reaction to our decision [to close the restaurant] was beyond what we imagined. We received hundreds of heartfelt messages from people from all over Canada. Mr. Mohamad Fakih reached out to me yesterday and echoed people’s wishes for us to remain open. We do not wish to set a tragic example for future immigrants and refugee business owners,” he said.

Al-Soufi said that he is still fearful for his family’s well-being and safety.

“That is always going to be my first concern,” he said.

Al-Soufi told reporters that his family is actively working to make amends with Dorothy Marston, the woman who was blocked by protestors at the Hamilton fundraiser.

“We are going to make amends with Mrs. Marston and her lovely family and the Hamilton community as well, and we will continue to spread this message of peace, tolerance and love.”

Al-Soufi said that while his son made a mistake, he does not believe it’s ever okay for anyone to threaten to harm anyone.

“He participated in rallies to support marginalized people. I love him and I’ll keep loving him all the time. Kids make mistakes and it’s our job to correct their mistakes, not kill them for making them. He has learned things the hard way.”

Al-Soufi said that he has been in touch with Marston’s son and that the interaction was positive.

“I had pleasure and honour of talking to Mrs. Marston’s son and it was really amazing to talk to him. I invited them here to the restaurant and he promised, this wonderful man, that he will bring his mother and father to eat in our restaurant. I pray that this will happen,” he said.

Al-Soufi said the threatening messages have been turned over to police.

“I ask for their forgiveness, and I forgive everyone,” he told reporters.