Mississauga residents are being urged to participate in a Greenbelt Not Asphalt Day of Action tomorrow in opposition to two new proposed highways in the GTA.

Mississauga residents opposed to the Ontario government’s plan to build two new highways, including one that would cut through west Brampton, are being urged by a national environmental group to get on their bikes tomorrow and protest the projects.

Environmental Defence, a Toronto- and Ottawa-based advocacy organization that says it seeks to work with government, industry and individuals to push for clean water, a safe climate and healthy communities, is staging a Greenbelt Not Asphalt Day of Action tomorrow in Mississauga and several other GTA locations.

In Mississauga, the group invites residents to meet at Celebration Square in the City Centre from 1-3 p.m., when flyers will be distributed. From there, the group will take a short bike ride between 3 and 4 p.m. to the Burnhamthorpe Rd. E. office of Mississauga East-Cooksville MPP Kaleed Rasheed.

There, they’ll let their opposition to the proposed Hwy. 413, also known as the GTA West Highway, and the Holland Marsh Highway be known, organizers say.

“If built, these highways would pave over farms, forests, wetlands and a portion of the greenbelt. They will also cost taxpayers upwards of $6-10 billion,” the group says. “Hwy. 413 alone would also add over 17 million tonnes of greenhouse gas emissions by 2050, at a time when cutting emissions is more urgent than ever.” 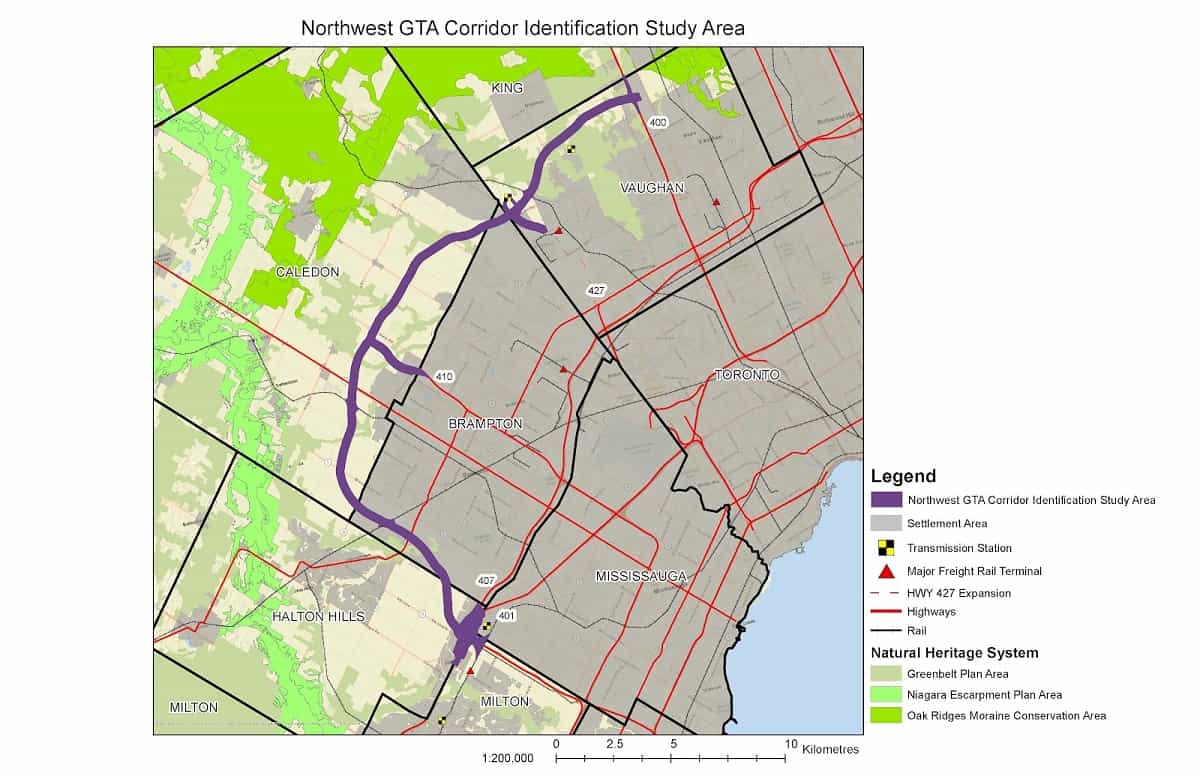 Map shows the proposed Hwy. 413 route (in purple) that would cut through west Brampton and join up with Hwy. 407 near Mississauga.

The organization adds it needs to show the provincial government that Ontarians do not want more mega-highways and instead want to “preserve our natural areas, grow and eat local produce, and invest in effective public transit and livable, walkable communities.”

The Hwy. 413 project in particular, a proposed 50-km stretch of road that would connect Hwys. 400 and 407 and cut through the western part of Brampton, has been met with opposition from municipal and regional councillors in both Mississauga and Brampton.

Mississauga City Council and Region of Peel Council have each passed motions opposing construction of the highway.

On Wednesday at City Council, Ward 5 Councillor Carolyn Parrish said Caledon benefits from the highway more than anybody, “but the world benefits” from not having any more emissions created by another highway.

“Why on earth would we add another highway,” she wondered.

Mayor Bonnie Crombie also said she’s still very much opposed to Hwy. 413, and that “all that money could go into public transit instead.”

Caledon Mayor Allan Thompson has thrown his support behind the highway proposal.

The Province is moving forward with the GTA West Highway despite opposition from local governments and conservationists concerned about the project’s impact.