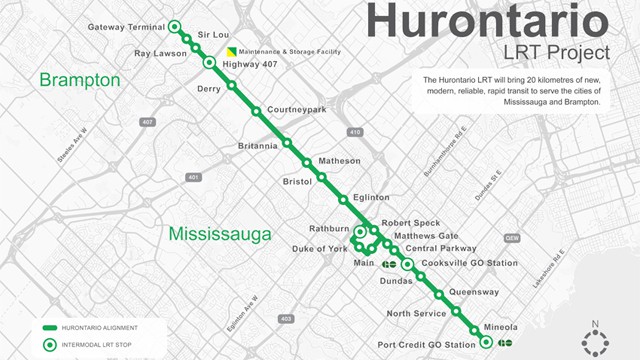 In 2018, Mississauga will finally see the commencement of construction for the Hurontario LRT, slated to run from the Port Credit GO station to Shoppers World in Brampton. This project has been a long time coming, having been envisioned years ago when higher forms of transit was envisioned for Hurontario Street.

But even though shovels have yet to go into the ground, vocal opinions about the LRT continue to proliferate and question the merits of this massive infrastructure investment. And believe it or not, there are still some folks who probably don’t even know an LRT is coming, even after five years of public meetings, studies and articles released on the subject.

Anticipating the need for effective communications, Metrolinx launched the Community Connector program designed to raise awareness among those who live or work along the Hurontario corridor. According to a Metrolinx spokesperson in an email to insauga, the team had 622 conversations with small businesses and information tables were displayed in office towers and some residential high rises.

Metrolinx stressed this is an ongoing process which will be repeated twice every year until construction completion in 2022. As for awareness of the light rail project, Metrolinx says there are various levels of it. With many people, there was awareness but some confusion around the project; they knew something was happening but weren’t sure about the difference between a streetcar and an LRT.

The Community Connector team members spoke nine languages in total, which enabled them to speak in a business owner’s first language. The level of awareness in the office towers was high and the reaction to the project was extremely positive, according to Metrolinx.

Despite these positive signs, various readers of insauga who are aware of the LRT were mainly skeptical, even downright hostile towards the idea, over the years. Case in point–some comments under one of the Quick Bite videos we did on the LRT (see above).

Here are some of the reader reactions:

“No one takes transit north south. This idea will be a failure like the Mississauga Express Transit to the airport. Just build a subway from Square One to Kipling.”

“Terrible idea if it takes up a whole lane of traffic. Just ask about how that worked out when they did it at the Dufferin and St.Clair area. Big regret on all. If it all underground or above the flow of traffic and not interfering with it and causing more traffic than there already is, than great.”

“It will only cause more traffic on an already busy road. It’s already serviced by buses so those same people that use it may be more comfortable. I highly doubt this will increase ridership enough to have justified the expense. A subway from Square 1 to Kipling would be much more useful and would get cars off the road.”

“Are there that many people travelling this route that warrant this or will this become like the new BRT (Bus Rapid Transit) where a bus goes by and no one is on it and the stations sit empty of vehicles?”

Here are comments from a businessman along Hurontario Street, contradicting what the Community Connector team found during their canvass:

“I am a businessman and I live on Hurontario Street near the intersection of Dundas St and Hurontario St. Everyday I use Hurontario St North and South. I know the complexity of this area. I strongly condemn the idea of Hurontario LRT Project.”

“LRT will cause a severe kind of congestion for road traffic, because there will be a very small portion left for road traffic. It would be better to build a bridge for LRT over the road on its central median. We have these kind of projects around the world. These projects are not only successful but very economical as well. Best example of this project is Dubai Metro Train Flyover.” – Shakeel Habib

But there were some comments that were in favour of LRT or at least favouring higher forms of transit that would still be above ground:

“It’s a start and I agree with many that it should have been done long ago. As great as it is we also need a east west line for such a sprawling city like Mississauga.”

“Screw that, build a dedicated bike roadway instead similar to the miway express and you’re all set. A bikeway would be more cost efficient and far more greener.”

“Build a Skytrain like they have in Vancouver or extend the UP Express train from the airport. Less construction, quicker completion and less inconvenience to the drivers who need the current lanes as is.”

There has even been a citizens group formed that’s lobbying for an additional station on the corridor between the Robert Speck and Eglinton stations, specifically right by Kingsbridge Garden Circle. As one of their representatives commented recently in public suggestions under the Mississauga Moves transportation master plan:

“An LRT station at Kingsbridge / Elia & Hurontario is essential: Kingsbridge and Hurontario is one of the most highly densified areas in Mississauga with over 5,000 residents within a 200M radius on the west of Hurontario. The vacant lands on the east (Elia Ave) are going to be developed very soon (source directly from Elia Corporation).”

“This will skyrocket the population to over 10,000 in a very tight radius. Without the mass transit of an LRT station, there will be horrendous traffic (especially with Hurontario being reduced from 3 lanes to 2) and this traffic will back up onto Highway 403 which will cause a catastrophic chain reaction.”

Whatever the case, when it comes to discussions about transit in Mississauga, the spectre of a Mississauga subway is always going to be floating around those debates. Just take a look at last year’s April Fools prank we pulled on our readers; some of you gave rather serious lamentations of what wasn’t done or what could have been (and some of you thought it was real).

In the meantime, one has to anticipate unexpected delays and cost overruns, so the timeline of completion by 2022 shouldn’t be assumed to be set in stone. It is more likely that the LRT would be finished a year later and cost more than the announced $1.5 billion price tag.

How will the LRT issue affect politics? With the provincial election campaign kicking off this spring and a municipal election later this year, there is ample opportunity for people to voice their views on light rail in Mississauga.

Maybe it will have some effect on the outcome of the elections, but only time will tell.