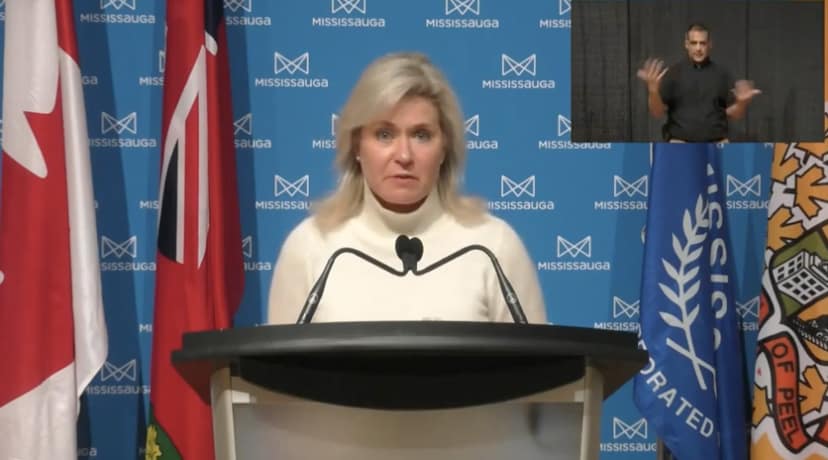 Mississauga Mayor Bonnie Crombie has once again called on higher levels of government to provide sick pay for essential workers as COVID-19 infections, many of which have been linked to workplace outbreaks, rise in Ontario.

In a Jan. 11 statement, Crombie joined other Greater Toronto and Hamilton Area (GTHA) mayors and regional chairs in calling for action on sick pay and funding for hard-hit municipalities.

According to the statement, the mayors and chairs–which represent the 11 largest municipal governments across the GTHA–discussed the escalation of the virus in the region and agreed to work with the province and health officials to implement “any further measures mandated to stop the spread of COVID-19.”

The statement says that while the mayors and chairs are happy with the province’s decision to take a Quebec-style curfew off the table for now, they are insisting that the federal and Ontario governments sort out who should backstop workers who lose their paycheque when they test positive for COVID-19.

The letter said the failure to pay ill workers is discouraging them from getting tested and prompting them to work while sick, enabling further spread of the virus.

Peel has been one of the hardest-hit regions in Ontario, logging 585 new cases alone on Jan. 11.

Peel Medical Officer of Health Dr. Lawrence Loh has also called on higher levels of government to provide sick pay for the employees who make up a significant portion of the workforce in the region.

“The magnitude and the number of outbreaks that we have in our community really reflect our employment profile and just the sheer number of industries where people cannot do work from home,” Loh told reporters during a Jan. 6 press conference.

Crombie pointed out that despite a lengthy lockdown affecting restaurants, fitness facilities and some retailers, case numbers are not improving.

“We’ve locked down harder than ever and numbers continue to climb. We know many cases are coming from those keeping our economy running,” Crombie said in a Jan. 11 tweet.

“It simply doesn’t add up that we’re asking some to stay home when a paycheque is on the line yet don’t have adequate sick pay to protect them.”

At an earlier press conference, Crombie also called for sick pay for long-term care workers, adding that the province needs to do more to protect vulnerable seniors in congregate settings.

“The province needs to immediately find a solution to ensure long-term care homes have what they need to keep their residents safe and that means recruiting more staff and offering pandemic pay to attract more workers,” she said.

According to Peel Public Health’s website, 1,368 long-term care and retirement home residents have tested positive for COVID-19 since the start of the pandemic and 328 residents have died of the virus.

Last week, Maureen Ambersley, a 57-year-old nurse who worked at a long-term care home in Mississauga, died of COVID-19.

“Our seniors deserve better and another measure that can make a difference is ensuring that all long-term care staff who need to can self isolate and are assured sick pay. Week after week, the GTHA mayors and chairs have been asking both the federal and the provincial governments to guarantee sick pay, particular for temporary and precarious workers,” Crombie said.

“We know that employees at essential businesses as well as in our long-term care homes are continuing to go to work while symptomatic because they’re afraid of losing their paycheck or their job. This is unacceptable and a glaring gap in the financial supports that have already been offered.”

In the Jan.11 statement, the mayors and chairs also pledged to help the province vaccinate residents as quickly as possible.

The municipal leaders also called on the federal and provincial governments to formally commence discussions on 2021 funding for municipalities.

“With the imminent rollout of a broader immunization plan, and the continued relief necessary for businesses and residents, municipalities are expecting to have increased service demands throughout 2021,” the statement reads.