Mississauga is right on Brampton’s bumper on the list of cities with the highest car insurance premiums in Ontario, even though rates fell in both cities in 2021.

According to rates.ca, Mississauga is the fifth-most expensive city to insure a vehicle, with premiums costing $1,971 per year. That is down 16.9 per cent from the previous year. Nevertheless, it still ranks in the top 5, and is 27 per cent higher than the provincial average of $1,555.

Rates.ca bases their calculations on what insurance would cost in a given city for, in its words, “a 35-year-old driver of a 2018 Honda Civic with a clean driving record.” Rates are subject to change depending on several factors relating to the vehicle and the driver(s).

Neighbouring Brampton also had a large drop with a 26.8-per-cent decrease to $1,976, just five dollars than Mississauga. That was still No. 4 in the province, but in 2020, Brampton had the highest premiums in Ontario.

The new most expensive city to insure a vehicle is Vaughan. The ‘city above Toronto’ stands atop the list with an average annual premium of $2,179. The second- and third-place spots are Ajax ($2,104) and Richmond Hill ($2,025). 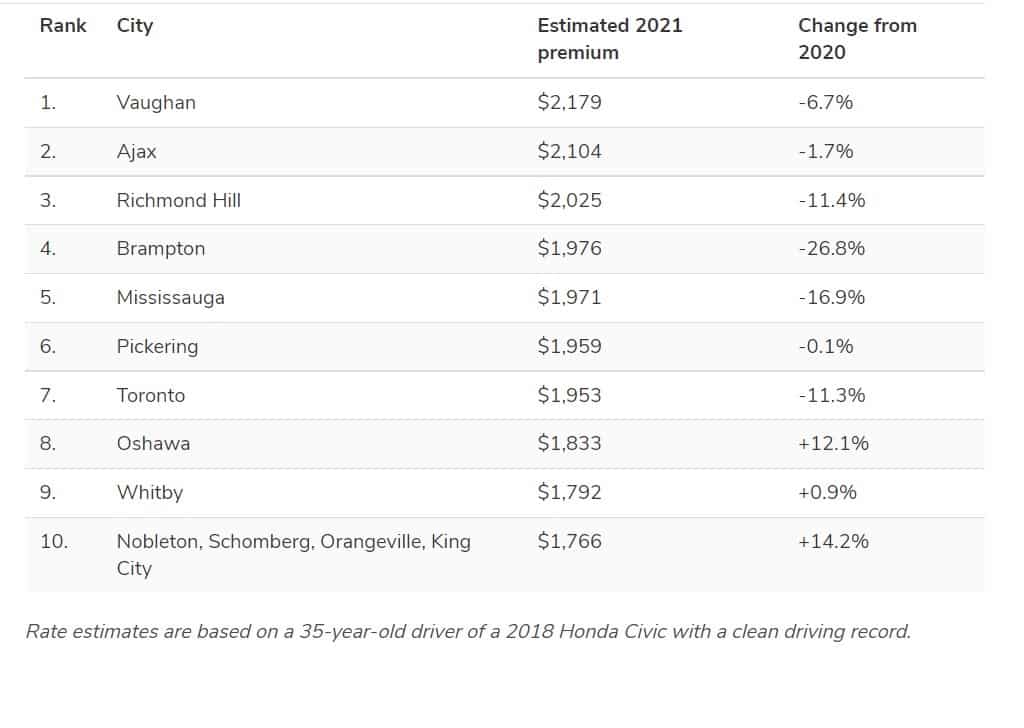 Toronto is seventh with an estimated premium of $1,953. But the estimates are much higher than some neighbourhoods. If that hypothetical average 35-year-old driver in Mississauga moved to Etobicoke North, they could expect to pay about $400 more per year, at $2,405. Etobicoke-Lakeshore/Etobicoke Centre has an estimated average premium of $2,227.

Humber River-Black Creek is the most expensive area of Toronto, listed at $2,746.