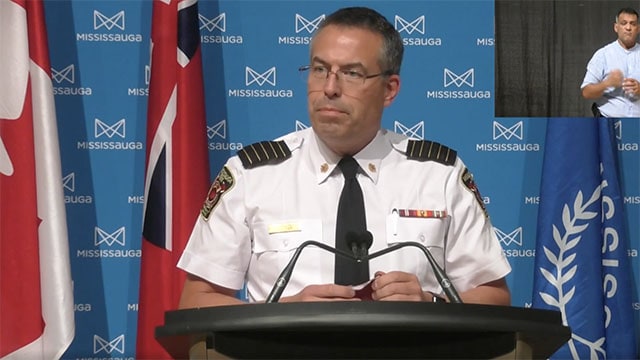 At an Oct. 21 press conference, Mississauga Fire and Emergency Services Chief Tim Beckett announced that he will be retiring on Nov. 6, 2020.

Beckett, who is also the city’s director of emergency management, became Mississauga’s fire chief in 2014.

“I’ve been very privileged to be the fire chief here in Mississauga for the last six-and-a-half years. I’m very supported by council, by the senior corporate leadership team, by my senior team in Fire and by our firefighters,” Beckett told reporters.

“This was not an easy decision for me to make. It was a personal decision.”

Beckett, who has been involved in fire service for close to 35 years, told reporters that he spent some time discussing the move to retire with his family.

“I’ve spent several months speaking with my family and my wife on when was the right time to go and it’s [been almost] 35 years of service in the fire service. It was time for me.”

At the press conference, Mississauga Mayor Bonnie Crombie said that the city wasn’t expecting Beckett to retire until early 2021, but that he’s leaving a bit earlier due to having some vacation time in lieu.

“We knew this day was coming,” Crombie said.

“Let me tell you how wonderful Chief Tim Beckett has been and how much I’ve appreciated the support. He’s been at my side through most of the major events, including the Hickory [house explosion] disaster that occurred and he’s been exemplary as a fire chief and we’re very fortunate to have had him over the past six years or so.”

Prior to joining the City of Mississauga in 2014, Beckett served as the fire chief for the City of Kitchener Fire Department and as the Ontario Fire Marshal regional co-ordinator for the Region of Waterloo.

“Personally, I’m grateful. I’m humbled and I’ve been very privileged to serve the citizens of Mississauga,” Beckett said at the press conference.

Crombie said that the city will appoint an interim chief while it looks for someone to take on the role permanently.

“You know, we’ve got a strong team here at Mississauga Fire,” Beckett said.

“So whatever direction they go next, I know that the citizens will be well-served by whoever comes in.”