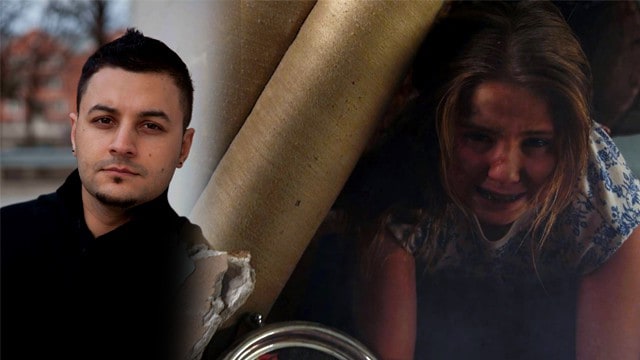 Since the project was officially completed in January of 2011, Us has screened at Academy and Genie qualifying festivals in North America and abroad such asShort Shorts Film Festival & Asia, in Tokyo, Japan, Cleveland International, LA Shortsfest and the Yorkton Film Showcase.

Mazi Khalighi was born in Shiraz, Iran and raised in Mississauga, Ontario. He has received acclaim for his past projects including Foreign Soil, which premiered at the 2007 Reel World Film Festival where it was nominated in the category of Outstanding Canadian Short Film, before going on to a successful festival run and being sold for distribution to Toronto based Ouat Media.

His latest film, Us, was produced with the help of the Filmmaker Assistance Program grant by the National Film Board, in 2009. Shot at Humber College in studio, Mazi Khalighi, teaming up with producer Lola Davidson, created a memorable film that forces the viewer to think about the effects of war and the concept of collateral damage. The film spent over a year and a half in post-production because of its elaborate special effects that create a startling reality to the piece.

Us is the result of an idea that I had one day when I was walking the halls of film school years ago in Toronto, Canada. I remember seeing a particularly stereotypical looking “white” girl at her locker. Blond hair, blue eyes, very pretty. I think earlier that day I had read an article or seen a news program about an attack that was carried out by US forces in the Middle East somewhere, probably in Iraq or Afghanistan. Looking at this girl I remember thinking to myself, I wonder what it would look like if her, or someone like her, experienced an attack of war. Would people care more about this little girl as opposed to another girl who happens to have a darker complexion, dark eyes and perhaps wearing a hijab? This central question led me to write the script for “Us” and ultimately to make the film.”

“Some of my earliest childhood memories involve war and terror” said, Khalighi. “My family fled Iran in 1988 during the Iran/Iraq war. I was only four years old at the time but I remember clinging to my mother’s neck as bombs landing in and around Tehran lit up the night sky. I remember the town alarm going off, windows shattering. I remember crying for my father to come home from work. We managed to escape to Canada and I am by no means a war child, but those memories are ingrained in me, which I think makes me even more sensitive than the average person living in North America to issues surrounding war violence.”

With the increased war rhetoric these days surrounding Khalighi’s country of birth, Iran, and the upcoming US elections, the timing seemed right to finally release Us to the world. Khalighi, though, is an Obama supporter, despite the fact that the film comes off critical of him.

“I can’t hate on Obama” says Khalighi. “I’ve followed his presidency like most others and I believe him to be a gifted mind and an eloquent communicator. His latest speech to the UN General Assembly was amazing. But I can’t let him off the hook when it comes to certain issues, like foreign policy.

Now with all this war talk about Iran, I feel more compelled than ever to get my film out there. It would be a dream come true to know that Obama took five minutes to screen Us. The film is meant to invoke empathy in the viewer by showing them, in graphic detail, the effects of war on innocents. I’m sure Obama is well aware and that he has access to real front line imagery, but if there’s no way for me to meet him personally, getting to know that he’s viewed my film, which does a better job of getting my anti-war point across than I could in conversation anyway, would be an awesome second best outcome.”