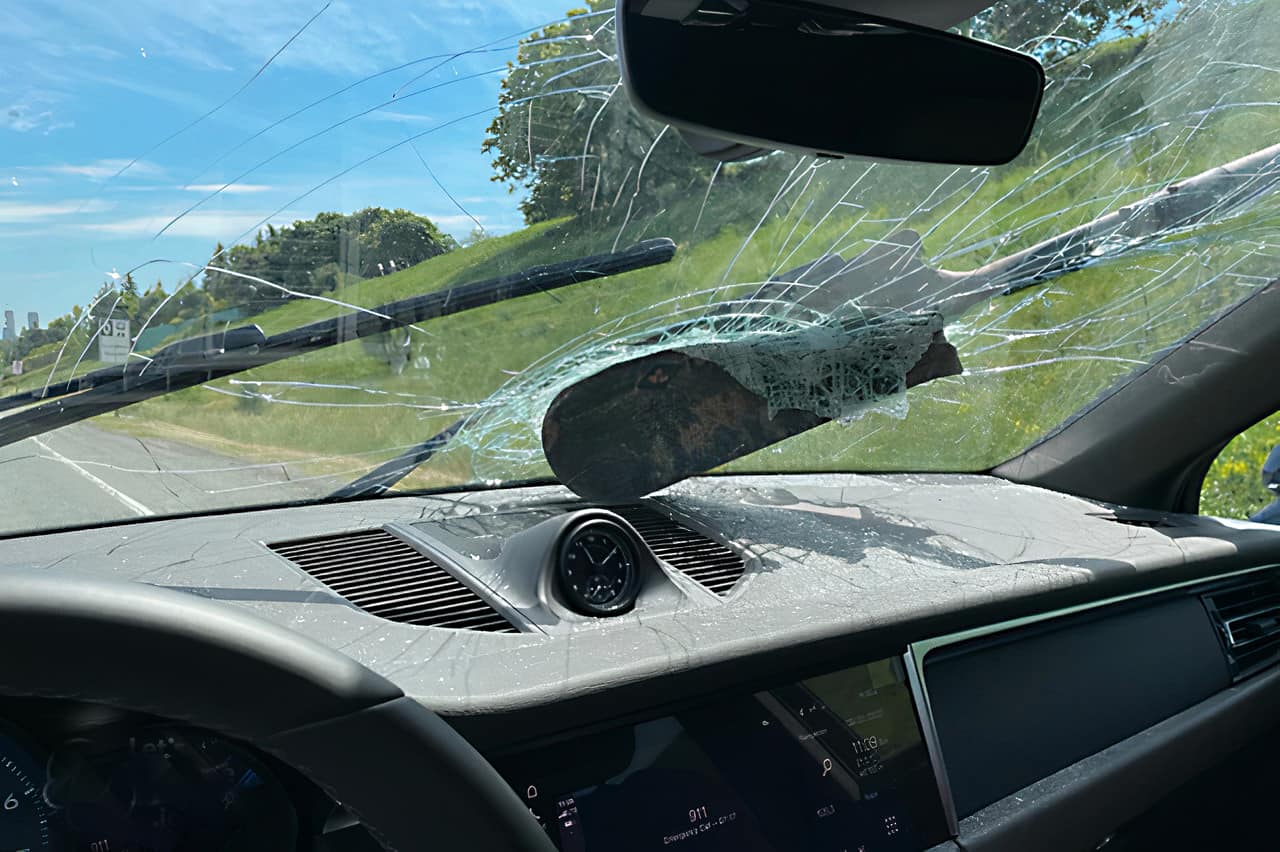 A Mississauga driver feels lucky to be alive after a shovel flew into her windshield while on a major highway this week.

The OPP posted a photo of the damaged Porsche with the shovel still embedded in the windshield — noting the incident could have been fatal.

The driver tells insauga was in the middle lane of Hwy. 403 around 11 a.m. on Monday, June 20 driving to an appointment. A car merged into the lane in front of her. At first, it looked like the bumper was coming off as the car changed lanes.

The OPP thought the old shovel might have been on the road and got kicked up by passing cars.

“Honestly, I don’t know what happened,” the driver said.

“It’s just so scary because it’s coming, obviously, at such a high speed.”

The shovel smashed through her windshield but somehow she managed to remain calm and didn’t swerve.

“I guess I screamed a bit but I was still in my lane. I put on my hazards, and I managed to change lanes and get to the shoulder.”

Fortunately, there was no one else in the car and the shovel hit the dashboard not her face.

“So I was really lucky,” she said. “It didn’t come on my side and could have gone in deeper.”

This is the result when you don’t secure your cargo. Could have been fatal!Debris on EB #Hwy403/Mavis. No injuries. pic.twitter.com/JeNa5x9wmK

There was glass everywhere inside her car and on her clothes but she was wearing sunglasses so it didn’t get into her eyes.

“It had shattered so it were tiny pieces of glass everywhere.”

On the shoulder near Mavis Road, she called 9-1-1. The dispatch told her to call a tow truck and the collision reporting centre. But when the tow truck driver arrived and saw the shovel, he told dispatch to send the OPP. He said police need to see what happened.

The police did come and posted a photo of the car as a reminder for drivers to secure loads. The summer is a common time to haul work equipment.

“There are all these gardening trucks…even personal pickups need to be super careful on the highway.”

She didn’t make it to her appointment but feels fortunate to have escape unharmed.

“I dodged a bullet,” she said