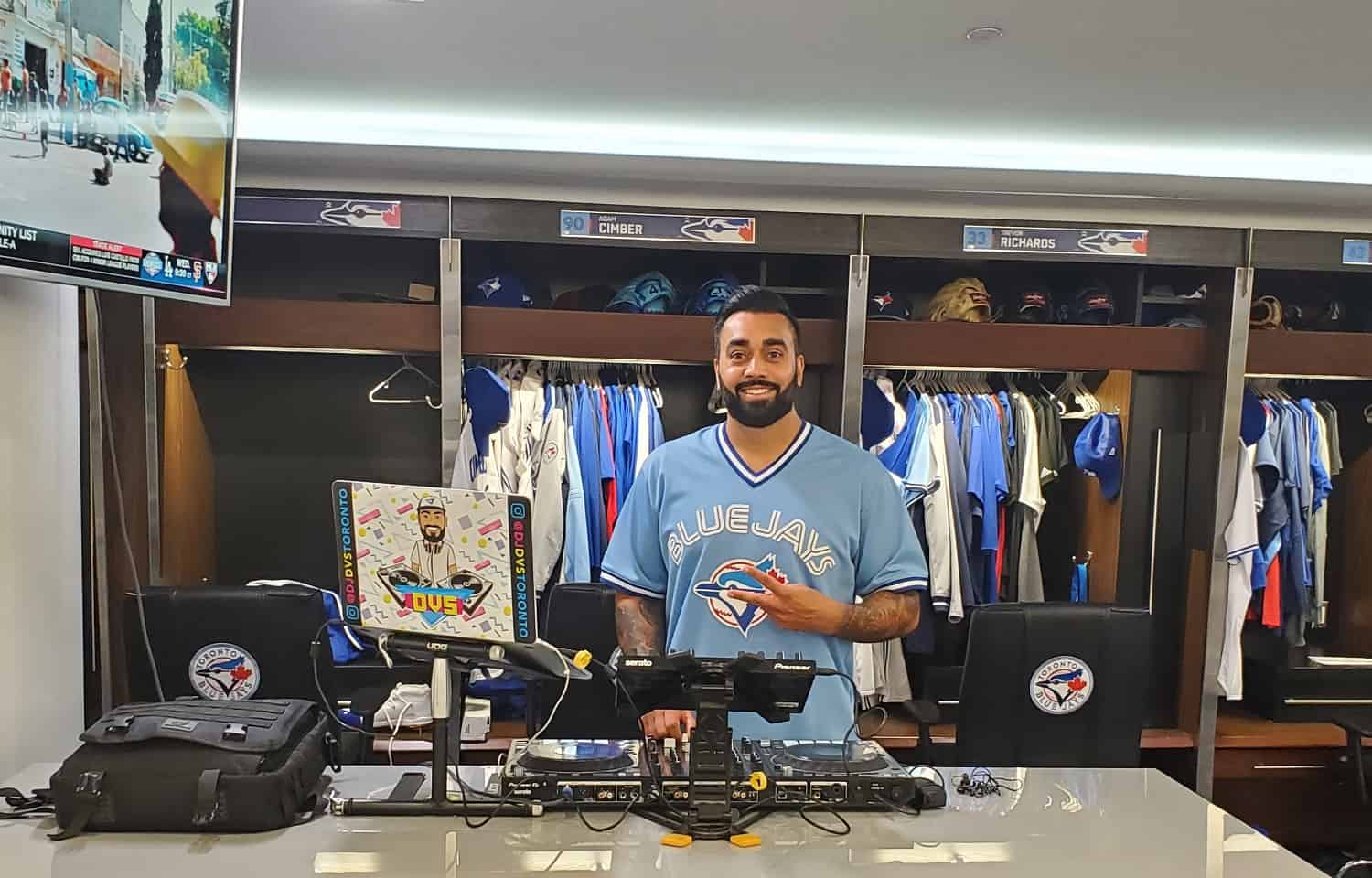 Less than a week after being invited into the Toronto Blue Jays clubhouse at the Rogers Centre to help deliver an upbeat musical vibe, Mississauga deejay Rehan Ahmad has a message for the Major League Baseball club and its manager.

“I’d love to do it again. I’m available. They can call me the night before and I’ll drop everything and go,” Ahmad, aka DJ DvS, told insauga.com in an interview today (Aug. 4).

Ahmad, who had struck up friendships with various Blue Jays coaches and players since attending fantasy baseball camps in recent years run by Jays’ great Roberto Alomar in Florida, was invited by the club’s manager John Schneider to bring his deejaying skills into the clubhouse last Saturday (July 30) prior to the team’s date with the visiting Detroit Tigers.

The Mississauga resident, born and raised in the city to the immediate west of Toronto, played a selection of house, classic rap and other mainstream hits from the 1990s and beyond in the Jays’ clubhouse from about 10 a.m. right up until game time at 3:07 p.m.

The Jays went on to down the Tigers 5-3 en route to taking three of four games against Detroit in the weekend series.

“It was a lot of fun, and everyone was super friendly,” Ahmad said of the nearly five-hour set. “They let me do my thing. I’m always open to suggestions and requests, but John (Schneider) said ‘Just do you.’ I only got one request from a player. Bo Bichette wanted to hear (American rapper) Lil Baby. It was a great time. John said maybe we’ll do it again.

“And it’s a good thing they won because if they lost, I probably wouldn’t get called back,” the professional deejay added, laughing.

Ahmad, 45, who’s been deejaying full-time in and around Toronto since 2014, was on the field at the Rogers Centre watching batting practice the Tuesday prior to his clubhouse debut when plans for the performance quickly came together. 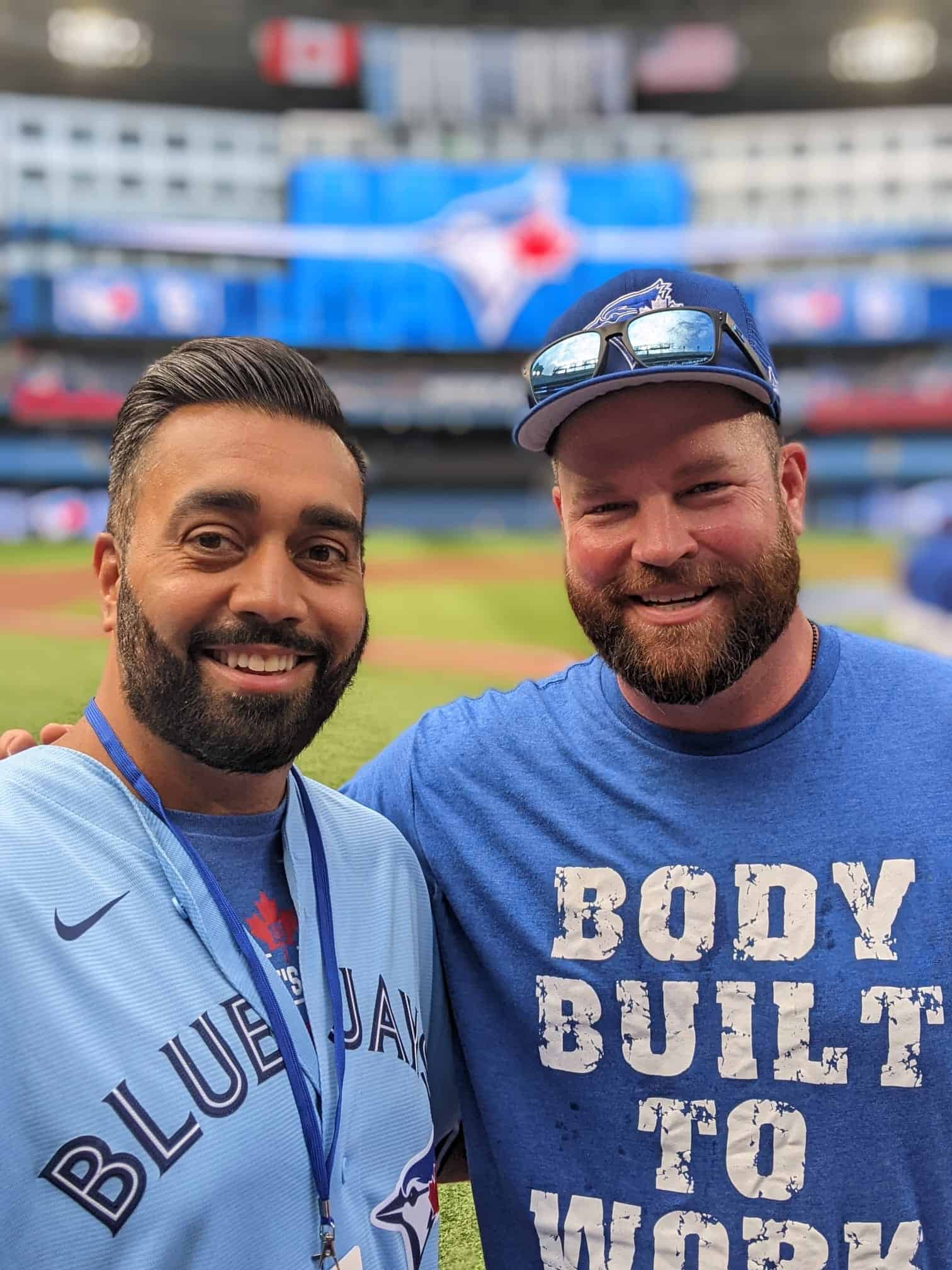 Schneider, who first met Ahmad at a 2016 fantasy camp in Florida where the former was pitching to the would-be ballplayers, put in a spur-of-the-moment request.

“I’m watching batting practice and John turns to me and asks if I’d deejay in the clubhouse (on Saturday),” Ahmad recalled, adding he’d been asked by other coaches in recent years to do the same, but plans never came to fruition. “So, I took it with a grain of salt. But then it happened, and I’m happy it did.”

Schneider had reportedly wanted to shake things up a little bit with the Jays, and decided that inviting Ahmad into the middle of the clubhouse to play music was just the thing to get his players hyped for the third game in their series with the Tigers.

A number of Blue Jays coaches and players had seen Ahmad perform before, including former Toronto manager Charlie Montoyo who first met the Mississauga deejay in 2019 when he was playing the KOST rooftop restaurant at the Bisha Hotel near the Rogers Centre.

Montoyo was fired by the Blue Jays last month, and replaced by Schneider on an interim basis.

Ahmad said that managerial change was bittersweet for him as both a fan of the Blue Jays and someone who’s friends with both men. He said Montoyo helped him strike an item from his bucket list a few years ago when he let Ahmad take batting practice with the MLB club.

“Charlie’s a really nice guy, and so is John,” said Ahmad, adding perhaps this cast of Jays simply needed a manager with a different style at this point.

As for Ahmad and his professional future as DJ DvS (@djdvstoronto), he wants to deliver the music for as long as he can.

“I never thought I’d be a DJ at 45 (years old), but here I am and I love this lifestyle,” he said, adding for the past six years he spends his winters in Dubai deejaying and playing pickup baseball with friends there. “I work 20 to 25 hours a week and I make my own schedule. And I love going to a venue and setting the vibe. I’ll do this for as long as I can and then transition into something else. But for now, I’m just enjoying the ride.”