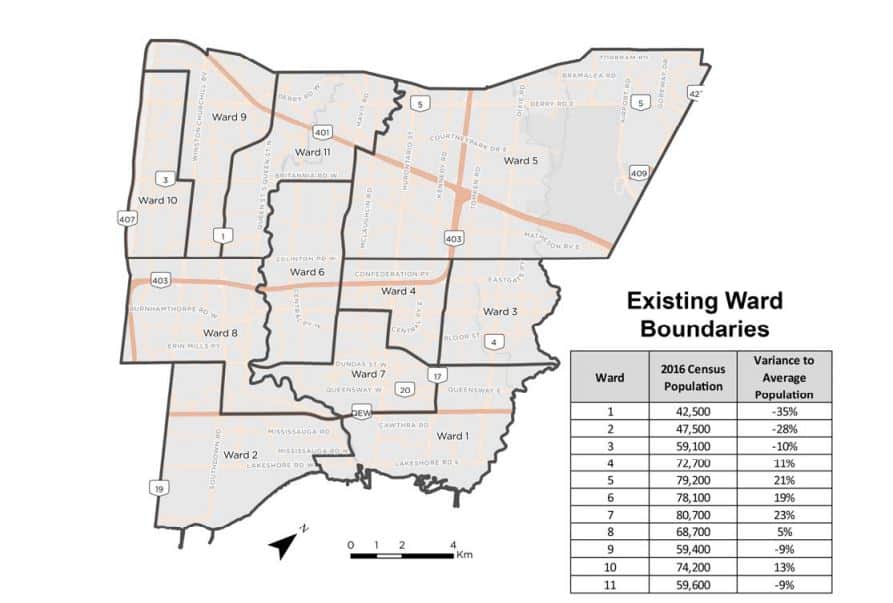 Mississauga City Council recently launched a ward boundary review, to update the areas where councillors represent and campaign in during election time. City staff were asked to submit a report to outline the various scenarios available. 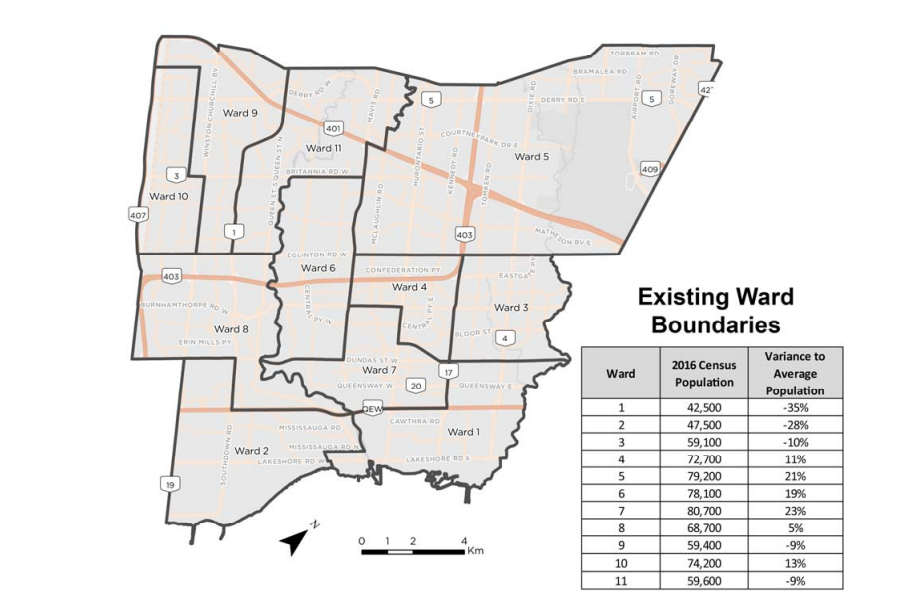 Three scenarios were presented in a staff report during the January 29 council meeting: one map with very minor adjustments, a second map which aligned with existing neighbourhood boundaries and a third which provided major boundary changes. 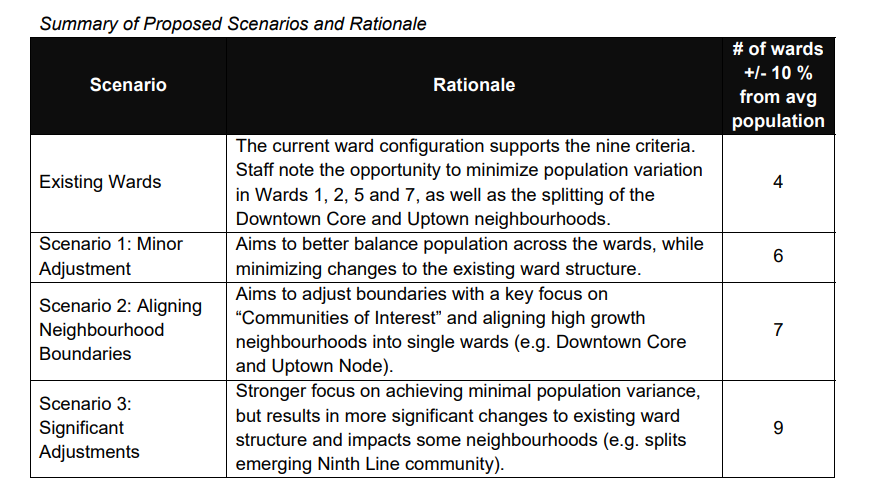 A more interactive map is available showing the proposed boundaries over the current map. Below is a more detailed description of some of the changes. 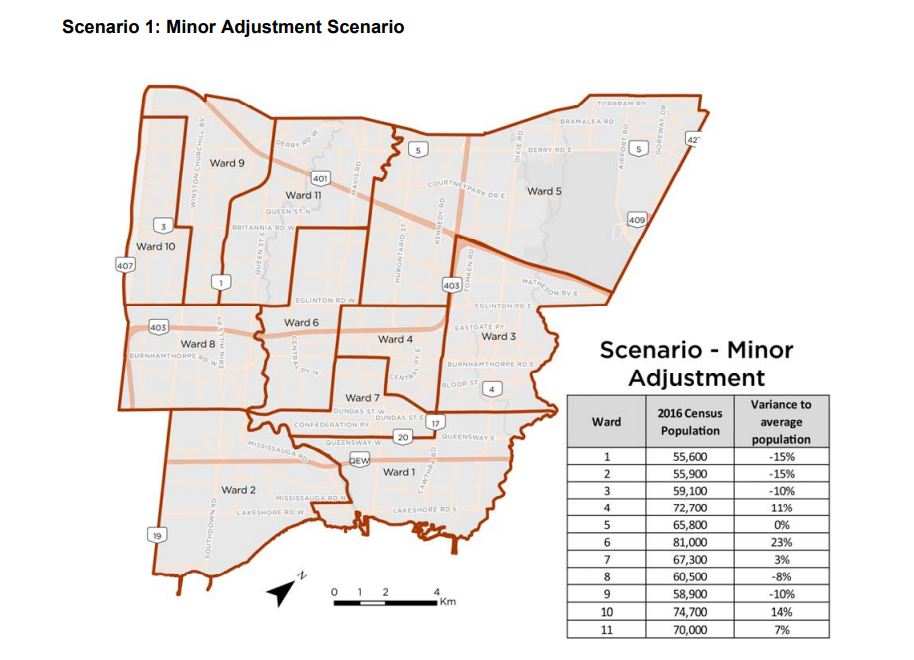 In this version, the majority of wards would either retain their current borders or see only slight changes. Ward 6 would see the most significant change as its eastern boundary would extend to McLaughlin Road, taking in part of Ward 5. The areas around the Rivergrove Community Centre would move into Ward 11.

Other changes to note include: 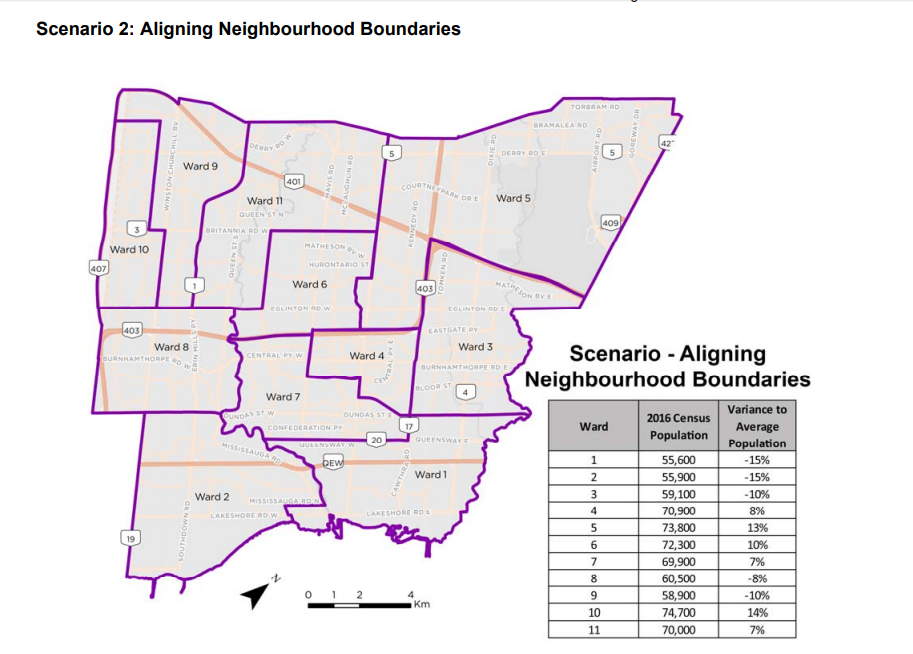 This scenario focuses on aligning high growth neighbourhoods into single wards, such as the Downtown Core in Ward 4, the Uptown Node in Ward 5 and Cooksville in Ward 7.

Changes in this map include: 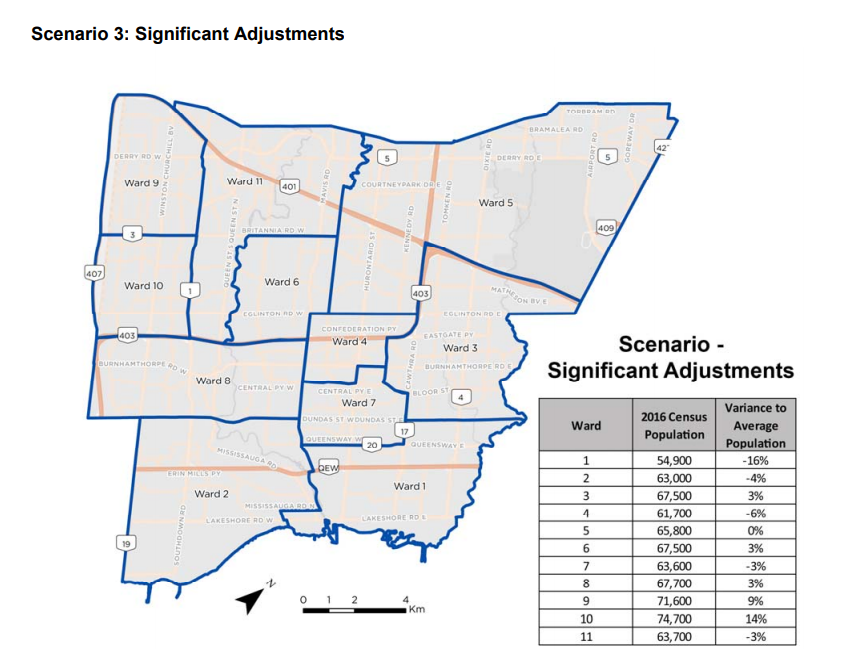 In the third scenario, a number of significant changes would take place as every ward would have boundary changes, but it also provides the best shot of giving out equal populations with around 60,000 residents in each ward.

The significant changes in Scenario 3 would be:

To say that most of the councillors weren’t happy with any of the options presented would be an understatement.

Ward 8 Coun. Matt Mahoney (Erin Mills) said, “I’m not really supportive of any of these options, I think it’s a bit premature to be conducting such changes when future population growth has not happened yet.”

But if you look at all three maps, other than the third one where Ward 8 stretches out to Mavis Road, an option that really didn’t receive any support, there are barely any changes. Only the Mississauga Road portion with all the high valued property owners (voters?) would be shifted to Ward 2.

Ward 9 Coun. Pat Saito (Meadowvale) remarked, “I think it’s ridiculous to divide a business park and cut through residential neighbourhoods instead of using Erin Mills Parkway as a boundary,” saying she’s just looking out for her residents, whom Saito would no longer be representing after 2022 because she announced she was not running again.

The one point that many of them seem to agree to, whether they supported changing the map or not, was to add a 12th councillor. Ward 5 Coun. Carolyn Parrish (Britannia-Malton) put up a map overlaying the current ward boundaries with provincial and federal ridings. 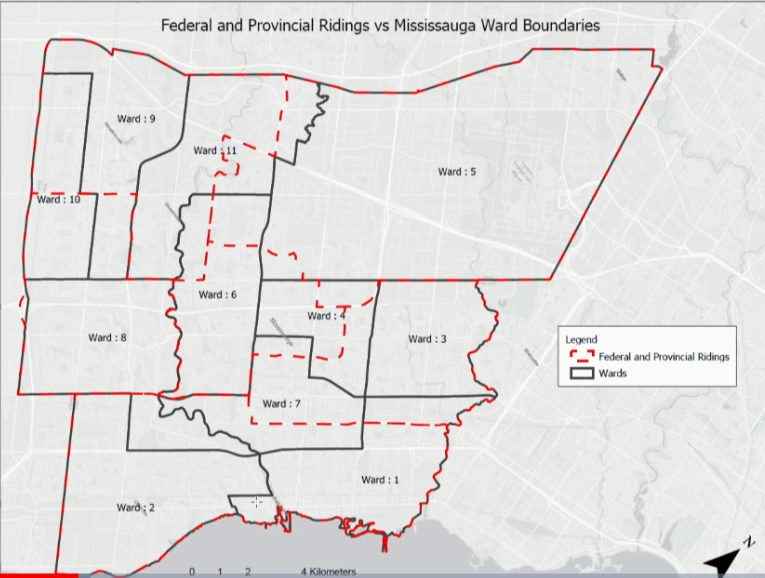 “If you take the dotted lines, which are the riding boundaries and divide them in half according to population, then you would have a fair division,” Parrish said, saying the city has to be prepared when it comes time to discuss representation at Peel Region.

“Right now, we look like petty politicians protecting our own little fiefdoms and territory,” she continued. Mahoney’s earlier remarks sounded as though he was only concerned about Ward 8, the rest of the city be damned.

“Whenever we ask politicians about ward boundaries, it’s almost like asking the friendliest fox to guard the henhouse,” Ward 11 Coun. George Carlson (Streetsville) quipped, adding that it seems to always get done at the last minute so it’s never been a “progressive effort to fix these ward boundaries”.

Ironically, when Carlson was a school trustee some 30 years ago, he also lamented about the previous boundary review and how certain groups lobbied for changes that only benefited them, in this op-ed he penned in the local paper at the time. Other councillors did not have much objection to the proposed changes, such as Ward 1’s Stephen Dasko (Lakeview-Port Credit) and Ward 3’s Chris Fonseca (Rathwood-Applewood). Meanwhile, Ward 7 Coun. Dipika Damerla (Cooksville) seemed to focus on the idea of increasing the number of staff per councillor, a proposal that was scoffed at by those who said they manage to ‘do the work’ with the finite number of assistants they have.

“Don’t talk to me about the work; I have the work. To get from one end of my ward to the other takes 25 minutes in good traffic, with Danny (her constituency assistant) speeding as I’m clutching on the door handle for dear life,” Parrish retorted.

Damerla sounds like she’s still yearning for the days when she was an associate cabinet minister at Queen’s Park, when it was commonplace to have ample amounts of staff and other glorified perks that came with such a lofty position.

“These wards are out of whack. You have some that are almost 100,000 people and others that have only 40,000,” said Mayor Bonnie Crombie, adding that the public will have their chance to provide input as well after staff were asked to come back with another report.

According to a spokesperson from the city’s planning department, In light of the request for additional ward proposals, the public consultation has been pushed back until the updated report is presented to council in around six to eight weeks.

Council needs to endorse the changes in a bylaw by December 31, 2021.

This entire debate at council made one thing crystal clear: it is a very bad idea to allow the elected politicians to decide on drawing the boundaries for their own constituencies. “It’s like giving them a chocolate cake and asking them to divide it up. Chaos,” as Parrish said.

There was a lot of talk about adding a 12th councillor, but staff already did such a report a few years ago, which was more confined to just changing Ward 5. But still, it is a good reference point to start from if staff are being asked to draw maps with an additional ward.

Also, there are independent commissions set up for readjusting riding boundaries at the provincial and federal level. Isn’t it high time for the local municipal level to do the same, or ask Elections Ontario if they are willing to take up the task?

For now, we have to use the system that we have. Mississauga better smarten up and figure out the ward boundaries they want to go with.

Otherwise, the spectre of Premier Doug Ford rearing his head and deciding that HE should draw the ward boundaries himself, like he did when he cut Toronto’s council in half.

If you think that can’t happen, then think again.