A former Mississauga councillor has been appointed to fill the Ward 1 vacancy.

Some 19 candidates made their pitches to councillors at Mississauga Council, but in the end councillors opted to go with a familiar face when they selected Dave Cook to serve as the interim councillor until November 30, when this current council term ends after this October’s municipal elections. 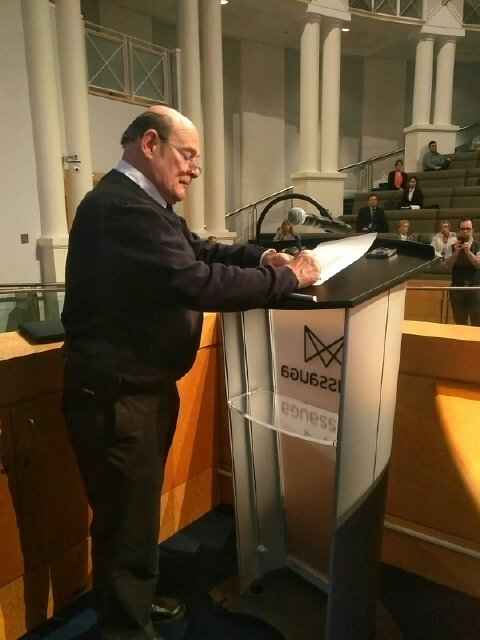 Cook will also be appointed to sit on Peel Regional Council, as all Mississauga councillors have done since the city’s inception in 1974.

The appointment was propagated by the sudden and untimely death of Jim Tovey, who had been the Ward 1 councillor since 2010. Tovey, 68, passed away on his way home after a Planning committee meeting on January 15. A former journalist, Cook was first elected in 1980 in Ward 7, when he defeated then councillor Ron Starr, who now serves in Ward 6. He was re-elected in 1982 and 1985 before retiring in 1988. After a long hiatus, Cook made an attempted political comeback in 2010, when he ran against Hazel McCallion for mayor. He managed to garner eight percent of the vote, while McCallion steamrolled into her final mandate with 76 percent for the win.

During his time away from politics, Cook was also the author of four books about local Mississauga history:

In his pitch to Mississauga Council, Cook cited his past experiences and pledged, like all the other candidates, that he would not seek to run in the fall municipal election.

Indeed, that experience and familiarity with council procedures is most likely what won the other councillors over. When he was running for mayor against McCallion, Cook cited that experience that if elected he could easily slide into the mayor’s chair and offer the proverbial ‘steady hand on the till’ without leaving a leadership vacuum, since McCallion had been mayor since 1978.

However, the final vote was not unanimous; indeed it was quite close:

With only 11 councillors minus the late Mr. Tovey, the eventual nominee needed six councillors to vote in his or her favour in order to secure the seat. Cook received votes from Councillors George Carlson, Sue McFadden, Pat Saito, Matt Mahoney, Ron Starr and Carolyn Parrish.

Another candidate, architect John Danahy, received votes from Karen Ras, Chris Fonseca, John Kovac, Nando Iannicca and Mayor Bonnie Crombie. Danahy focused on the fact that he worked with Tovey on many of the ongoing waterfront projects.

There were other interesting candidates, such as former citizen of the year and Legends Row founder Ron Duquette, and Moaz Ahmad, a transportation policy consultant from Ward 6 who started up a Twitter account based loosely on the nickname Tovey gave his constituency to sell his candidacy.

Congratulations to interim councillor Cook. It will be interesting to see if he can live up to Jim Tovey’s legacy in the final year of this council term. Barring a last minute change of heart, Cook isn’t running again, so there will be another new councillor for this area come December 1 after the municipal elections.

We saw almost 20 people say they think they have what it takes to sit on City Council. Might we see some of those Ward 1 hopefuls run in the election? Only time will tell.