Affordable housing is already a hot button issue in Mississauga. Whoever ends up running the city after this municipal election will have to deal with housing going forward, no matter which party is in power in Ottawa or at Queen's Park.

Over the last few years, Mississauga's concentration of growth has been present along major future transit corridors or down by the lake, such as Hurontario Street, the Port Credit and Lakeview areas. But affordable housing remains out of reach for many people, with some low-income families waiting for as long as seven years for a home.

While Mississauga has brought forward an innovative plan called Making Room for the Middle in order to address the ongoing housing challenges for Mississauga’s middle-class residents, another report from Ryerson University's City Building Institute looked into Mississauga and concluded that Canada's sixth largest city has the capacity to add almost another 200,000 housing units through intensification.

The report, entitled "Finding the Missing Middle," examines a more viable third option apart from a single condo unit in a high rise building close to amenities and transit, or a single detached home with neither amenities nor transit nearby with a long commute required. 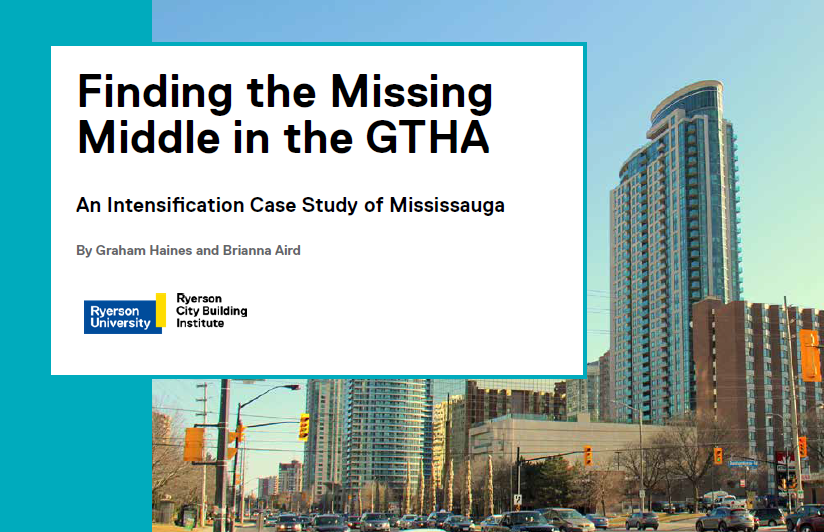 Some key findings on how much housing and where Mississauga could build it:

Other statistics and findings from the report include:

The 'buckets' do not require major policy changes as they are in areas where Mississauga is already prioritizing growth through its official plan; but corresponding changes to Mississauga zoning by-law to allow for appropriate densities in these areas should be implemented to make intensification more straightforward.

Here's a breakdown of those five buckets as identified in the report: 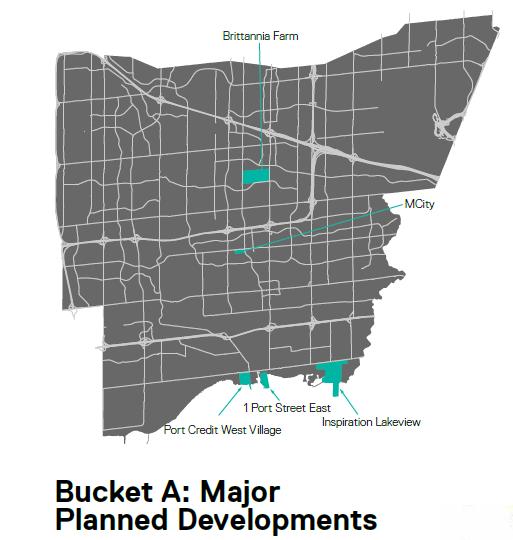 Mississauga's current map of major planned urban developments, such as M City, the Britannia Farms project, the developments around Port Credit and Lakeview could accommodate up to 20,000 housing units. 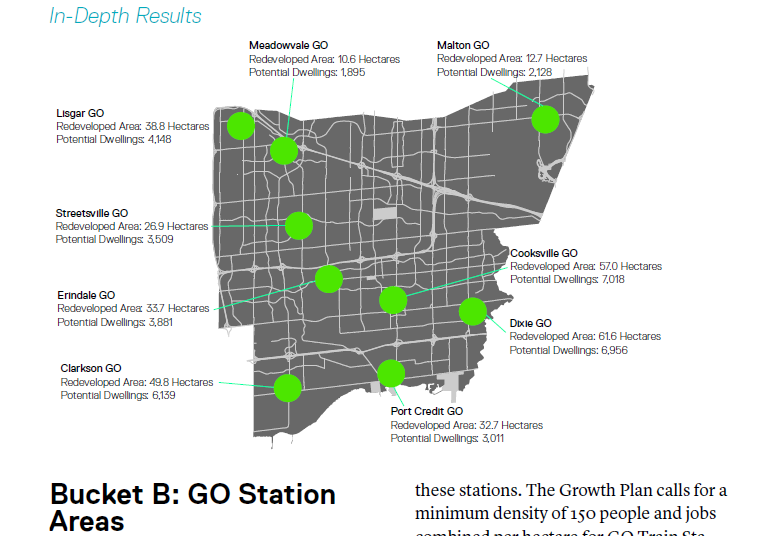 There are  GO train stations in Mississauga. Combining all those stations, they can support potentially almost 39,000 housing units. Cooksville can support the most at over 7,000 units, while Meadowvale has the least capacity at just under 1,900 units.

"Redevelopment of GO station areas into strong mixed-use communities can happen primarily via the redevelopment of low-density sites and parking lots, including those existing. This redevelopment does not mean that parking needs to disappear--where necessary, surface parking lots can be replaced with parking structures that help maintain needed parking, while freeing up development opportunities," the report says.

Examples cited include the Nest Condos and Galleria Mall in Toronto. 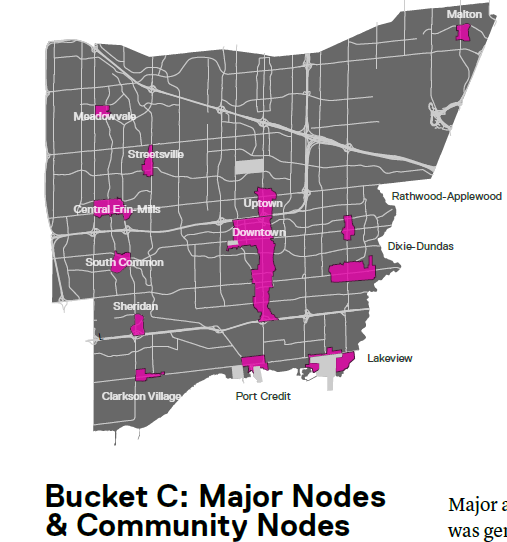 These 13 nodes are areas where higher density residential development are permitted in Mississauga. GO station area from nodes such as Streetsville, Port Credit, Dixie and Clarkson were removed from the equation to ensure that housing potential was not double counted.

Ryerson CBI estimates that this could accommodate around 44,000 new homes, as shown in the chart below. 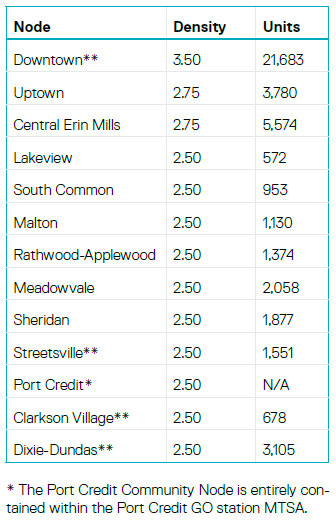 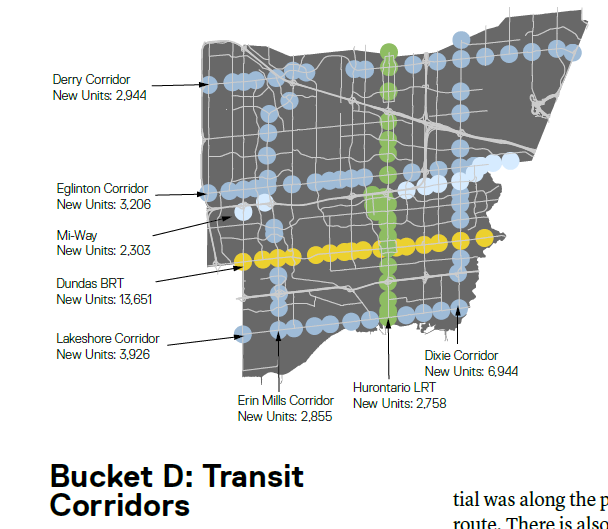 I think this is the most interesting find from the report, showing major corridors within Mississauga that can accommodate additional residential housing, almost 39,000 units. The highest concentration of potential new units along a transit corridor is Dundas Street at some 13,000, with Hurontario (and the incoming LRT) also in consideration.

What is noticeable is the potential higher number of units on a vertical route such as Dixie Road at 6,944 units and Derry Road along the north of the city. Derry is particularly interesting because east of Hurontario the street is mainly zoned for commercial / industrial.

Some examples of development as it pertains to major transit corridors include the Albina Yard in Portland Oregon and Richmond Town Manors in Toronto. 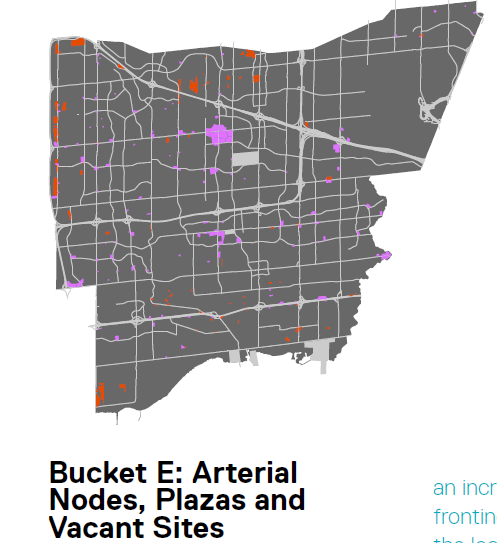 These areas include big box stores, car dealerships and strip malls. Due to their low-density, these sites are relatively easy to redevelop. However since they are not close to planned transit investments, their redevelopment is less strategic than that of other sites.

Some particular areas around Mississauga intersections that fit this category include the strip plaza at Britannia and Creditview, Britannia and McLaughlin and Winston Churchill and Thomas Street. There are also a few smaller car dealerships that also fall under this category, and already some of them have been replaced by the very type of residential development the report describes.

Some development examples from outside Mississauga the report references are Humbertown, transforming a suburban strip mall into a mixed-use community, and Finch Avenue East Towns, adding family friendly units near the Finch TTC station. 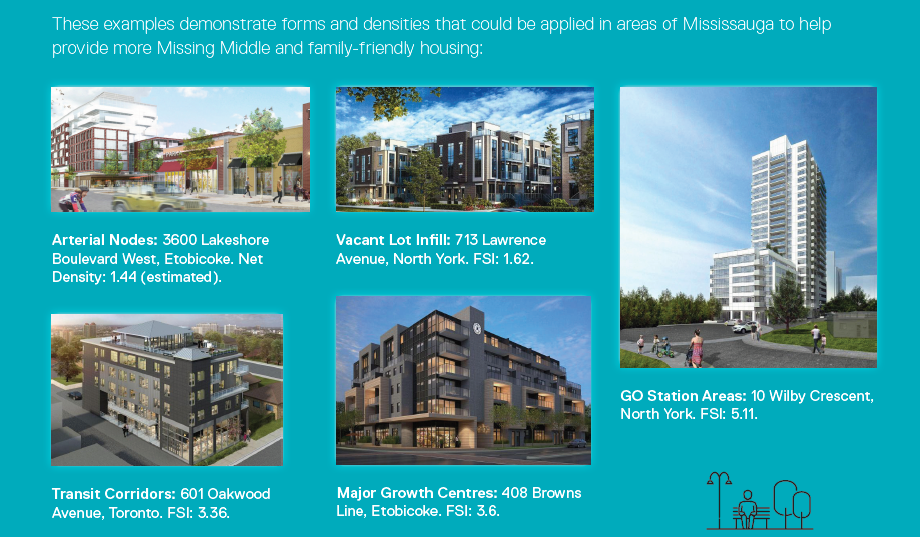 "Even with conservative assumptions, we've shown that with the density and land availability, there is ample space to add new Missing Middle family-friendly housing units across our municipalities--and that this is possible while building predominantly large units."

"However, changes to land development regulations and processes across the GTHA will be necessary to deliver the abundance of housing we modelled, but development is hindered because the zoning by-laws do not reflect the real potential of actual sites." The report concludes, adding that reduced land consumption, more efficient infrastructure use and building more vibrant communities as the overall benefits of these proposal.

"I would like to thank Ryerson University for their study "Finding the Missing Middle." It is a look at what can be possible when municipalities have proper tools to work with the development industry to build a complete community,” Mayor Bonnie Crombie said in a statement to insauga.

“While this study demonstrates what could be possible in an ideal world, there are real-world factors that must be considered, including the value of the land in the so-called "yellow-belt" areas, and the existing neighbourhoods where these 174,000 units would be built. We cannot negate or disregard the legitimate concerns of residents living in these communities. To achieve this goal will require working with the community, the development industry, and other levels of government.”

“I will continue to make progress on our affordable housing strategy, to build more affordable ownership and rental units for the middle-class, including instituting an inclusionary zoning policy to incentivize the building of new, affordable units of all sizes and advocating to the federal and provincial government for more tools (i.e. tax credits) to encourage the building of affordable, middle-income housing,” the mayor continued.

Crombie brought up examples of low medium density development projects within close proximity to transit and services underway, such as Lakeview, West Village, Habitat for Humanity Bristow-Law Build Project and the “potential” of the Ninth Line lands.

People are not going to stop moving to Mississauga anytime soon, even though places like Brampton will see even higher growth numbers. That said, Brampton still has ample land to develop, at least for those single detached homes that people still gravitate towards. Mississauga has a unique opportunity to provide a variety of housing types in various areas around the city despite having all its land already built out.