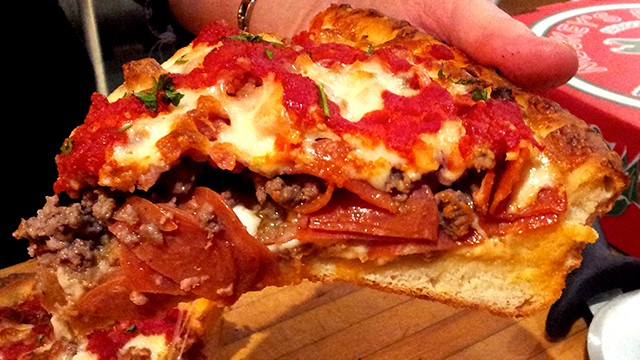 Mickey’s Pizza is doing something right especially when foodies from all over Ontario make Mickey’s a part of their eating regimen and when foodies as far as Australia and Japan visit this cozy pizza hot spot.

As well the only pizza joint that has been visited by “You Gotta Eat Here” is Mickeys Pizza, and with good reason.

With only about 7 seats in-house they fill up quickly and in the summer, there are many times when the place is packed and people spill into the parking lot to eat their freshly made pizza curbside or on the hoods of their cars.

Mickey’s is located in Clarkson, a quaint village located in the most southwest area of Mississauga in a small and unassuming plaza. Just look out for their mascot –a giant inflatable green dragon perched on top of the building.

Sandi and Mickey Stoyan own and operate Mickey’s Pizza, Mickey’s pipe dream after being in the medical field for over 20 years. Having lived in this city for over 25 years, their roots are in Mississauga which is now home to the only place in the GTA that specializes in Chicago-esque deep dish pizza that they call a “Killer King”.

I sat down with Sandi to find out more about their pizzas and what makes them unique.

What makes Mickey’s unique?
Quality is huge with us, absolutely huge, it means everything. Our dough is 20 years in the making, it’s phenomenal dough, and it’s very versatile. When we do garlic bread, we bake the bread for you and it’s soft and tender, and it’s freshly baked bread.

The same dough is used for the “Killer Kings” (the deep dish), and the flat (pizza).

Our Killer Kings (pizza) are different. They have a different look, different taste, and different texture. And our flat pizzas are entirely different because they’re grilled on our visual oven. It’s the only oven in Canada with glass walls, that’s five feet and it rotates, like a giant record player, which is really nice on the weekends because it gets jammed up and people will come in and they’ll look at it and ask “what’s that?” and see our stuff.

Tell me a little more about this oven.
It’s energy efficient, so it heats up within 15 minutes. It’s got gas burners at the bottom that heat up the deck, and then 3 infrared burners on the top that grill it. It changes the flavour of the pizza because it’s more of grilled pizza, it’s not like baking it in the oven, and the flavour is different. The flat ones are grilled, and deep dish goes in the deep dish ovens. 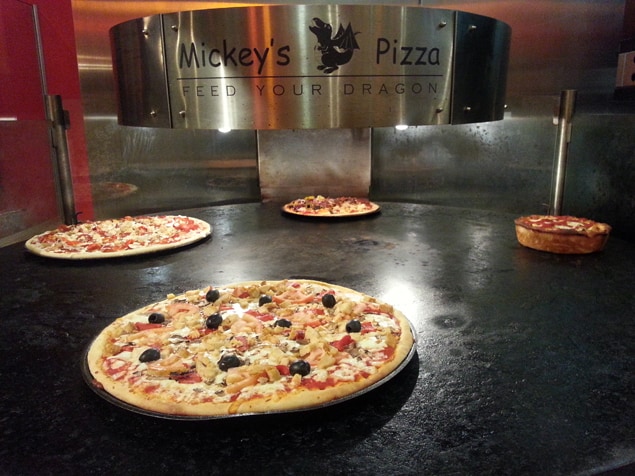 Tell me about your menu?
We have 30 signature pizzas, which is really 15 different flavours which are available in both the deep dish version called Killer King Signature Pies and the thin crust version, called Traditional Signature Pies. And we also have a Halal menu.

So these are all your recipes?
The dough itself is a recipe that took 20 years to create. It’s very versatile. It’s his (Mickey’s) recipe and it’s literally 20 years of tweaking it.

If you eat pizza anywhere and I can honestly say that from eating it all over the planet, a lot of times it lacks flavour, it’s really stiff like a piece of cardboard, it’s just not that nice. And this dough can do the thin crust, it can do the deep dish, it’s soft, there’s no chemicals in it, there’s no preservatives, and the quality of the ingredients are the very best that we could source for it. And it’s delicious which is why I can’t stop eating it!

Why did you choose Mississauga as your location?
My husband grew up in the restaurant business; his parents had a restaurant for years. So he knew how many hours you have to put in. So we thought that when we opened that we’d probably be living here so let’s open it up where we live, so it’s close to home; it’s easier to run back and forth and keep track of it and manage it, and be on top of it as we grow.

You have mentioned that you have travelled the world to eat pizza, what places have you been to?
I have eaten pizza in China, in Egypt, in Hawaii, everywhere in the Caribbean, pretty much every country in Europe that you can imagine. Everywhere that I’ve been, we travel extensively, all over the planet and I’ve eaten it everywhere.

Where is some of the best pizza you have had in the world?
The best pizza I’ve had outside of here is in Santa Margherita in Italy.

Tell me the story of how did it all started? What was the deciding factor to move from the medical field to the food industry?
Because he (Mick) was so chronic with his pizza, making it every week. So every Saturday, because we’d have so much food, we always gave it away to our neighbours, had friends over, had family over, and everyone who ate it said ‘oh my God, you have to open up’. So because of it, it was a natural evolution to finally have one. Not my dream, (it’s) his – because he loves pizza so much.”

How often do your menu items change?
There is a lot more that we can do. It’s coming. It takes a lot of time to do it. I also created a dessert pizza that’s phenomenal, a deep dish dessert pizza.

Mick presented us with a custom-made Traditional Pie (flat pizza made 4 ways in one) and a Killer King Pie (deep dish style pizza) which included ingredients I like but wouldn’t necessarily pair together on a pizza. From the dough, to the cheese, sauce, and artichokes, spinach, tomatoes, and sundried tomatoes – it was a great balance of flavours that worked. 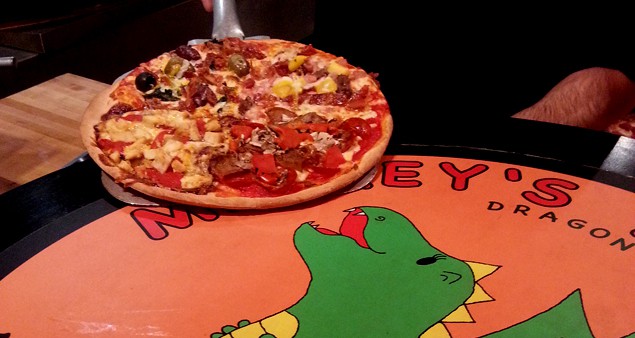 How I feel after I eat something is my gauge of how clean that dish was. The ingredients in a Mickey’s pizza are so fresh, and I felt good after I ate it. I didn’t feel heavy or weighed down by dough made with artificial ingredients, or topped with subpar ingredients.