McMaster University formally launched the Centre for Discovery in Cancer Research (CDCR). It's where Hamilton's top clinicians and scientists will come together and focus their research on treatment-resistant cancers with high death rates.

McMaster University formally launched the Centre for Discovery in Cancer Research (CDCR). It’s where Hamilton’s top clinicians and scientists will come together and focus their research on treatment-resistant cancers with high death rates — such as glioblastoma (GBM), triple-negative breast cancer, and pancreatic cancer, among others.

The CDCR launched on Monday (Oct. 25) with its inaugural annual lecture and the presentation of the new Cindy Lee Graham Memorial Award — named for the Guelph native who donated her brain and spinal cord to McMaster researchers after she died earlier this year from glioblastoma.

Since the story of Graham’s gift, the GBM research program has received more than $600,000 in donations. The volunteer charity, Brain Cancer Canada offered $100,000 in support of the new centre.

Graham was the first donor accepted after a long pandemic shut down of the McMaster Education Program in Anatomy and others with the disease have followed her example.

Her eight-year old sons Dean and Darwin presented the first award to Mac PhD student Chirayu Chokshi. A member of the new centre, his research on glioblastoma cancers is advancing the technical analysis available. Chokshi is also an active advocate for the brain tumour patient community. 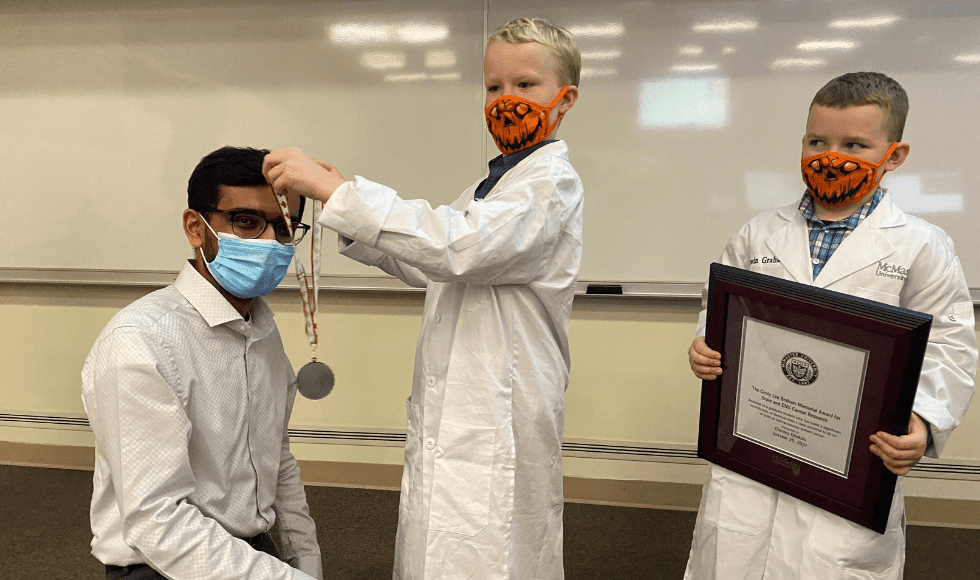 “Cancer has been dubbed the ‘Emperor of all Maladies’ and represents the leading cause of death in Canada. Nearly one in two Canadians will develop cancer in their lifetime and about one in four will die from it,” said Sheila Singh, the inaugural director of the new research centre and professor of surgery at McMaster’s Michael G. DeGroote School of Medicine.

“The centre aims to uncover the biology of cancer recurrence and develop a better biological and genetic understanding of why cancer treatments fail, and how best to target the biological drivers of the recurrence. As every patient’s cancer has a unique biology and responds to treatments differently, we aim to personalize and predict the therapies that could work best for each patient.”

In announcing the new centre, Paul O’Byrne, dean and vice-president of the Faculty of Health Sciences (FHS), praised the initiative.

“McMaster’s Centre for Discovery in Cancer Research will be a key component in the fight against hard-to-treat cancers, as it will specialize in cross-disciplinary research and train a new generation of scientists in developing new tests and therapies that will save thousands of lives worldwide.

“This new centre will also ensure that McMaster University remains a global hub in cutting-edge cancer research for decades to come.”

The centre says it will incorporate a “bedside to bench” or “reverse translational” research mandate. This means doctors taking samples or other observations from cancer patients will collaborate with basic scientists who will model the observation in their research labs. The results will then be delivered back to physicians who can use the results to devise and improve new tests and therapies.

Lab-based models will test samples using patient models and algorithms driven by artificial intelligence informed by data science. Insights gathered from testing can be used to form a new therapy that can be tested in clinical trials.

The CDCR’s clinicians also aim to empower patients by helping them understand the biology of their cancers and make informed decisions if it returns, including possible treatment trials.

Singh said educating patients about their condition will allow them to use the best data and evidence to make an informed choice.

“As a surgeon-scientist, I have always had a foot in both worlds: basic science and clinical care of patients. I am happy to bridge the gap between patients, doctors and basic scientists,” said Singh, who is also a pediatric neurosurgeon for Hamilton Health Sciences.

“Basic science research is the discovery engine of all cancer treatments that have saved millions of lives globally. Understanding the biological drivers of cancer and its recurrence is the crucial first step.”

Singh said the research team will comprise McMaster faculty members and three new faculty who will be recruited over the next three years. The CDCR will work closely with the Department of Oncology, the Escarpment Cancer Research Institute, and the Ontario Clinical Oncology Group.

The centre will also partner with the McMaster Immunology Research Centre, the McMaster Centre for Obesity, Metabolism and Diabetes, and the Centre for Probe Development and Commercialization based at McMaster, to develop new tests and treatments.

“Complex cancers call for complex therapeutic strategies that are data-driven and rationally designed, based on experimental interrogation and new scientific discovery,” said Singh, She hopes that new discoveries would reduce the burden cancer places on both individual patients and society as a whole.

For the patients who survive, the toll often includes long-term physical and psychological side effects of chemotherapy, loss of income, and healthcare expenses. Singh says it could also mean $40 billion in losses for the Canadian economy, considering losses of wages, taxes, corporate profits, and direct health care costs.