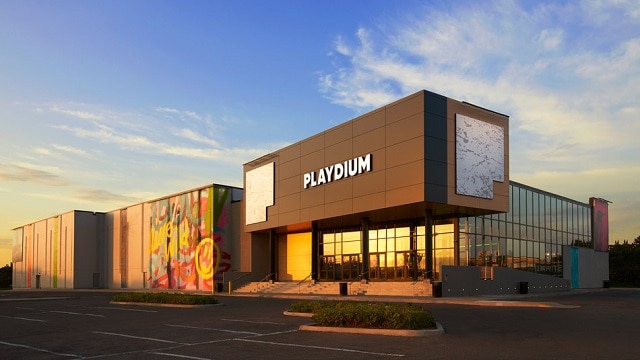 A new Playdium is officially open and it appears to be the chain’s biggest and most ambitious location yet.

Roughly two-thirds of the complex is dedicated to gaming and attractions, including nearly 100 “state-of-the-art” video games, rope courses 20 feet off the ground, a 60-foot zipline, bowling, and eight immersive virtual reality games.

The impressive video game selection covers everything from classics to racing to roller coaster simulation. As usual, players can earn credits which can then be exchanged for prizes at the “Swag store” — items such as board games, plush toys, and even drones and GoPro cameras are up for grabs!

The Playdium Eatery offers an international-inspired menu of tacos and bowls, pizza, sandwiches and sliders, and more. For adult visitors, a selection of drinks including cocktails, wine and draught beers is available.

Every visit to Playdium also allows you to score SCENE points, which can be redeemed for food, game credits, or movie tickets.

The expansion of the Playdium concept was first announced in 2017, with plans to open 10-15 locations in mid-sized communities across the country. In addition to the Brampton location, a brand new Playdium will be opening later this year in Whitby, Ontario and next year in Dartmouth, Nova Scotia.

For more information on everything the new facility offers, visit playdium.com.