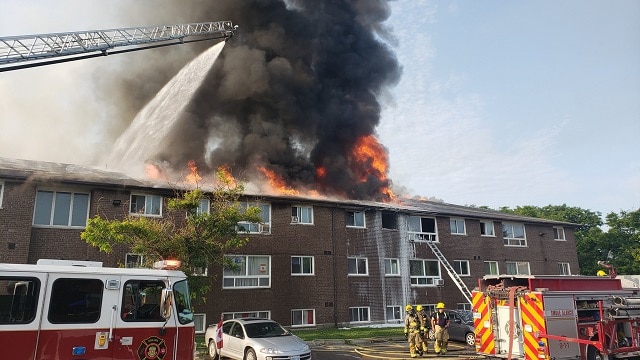 Oshawa Fire crews are on scene for a large apartment fire this morning (July 3).

The fire broke out at 1420 Ritson Rd S near Valley Drive, with heavy smoke and flames bursting through the roof.

Police say all residents have been evacuated. No injuries are reported at this time.

The road is currently shut down at Ritson and Madawaska, and residents are asked to avoid the area until further notice.

UPDATE: Upon arrival, crews rescued two victims from the building and they were transported to hospital by paramedics. One victim has since been released from hospital while the second remains in critical but stable condition.

Ontario Fire Marshal investigators are on scene with the Oshawa Fire Inspector to investigate this incident. Firefighters are expected to clear the scene shortly.