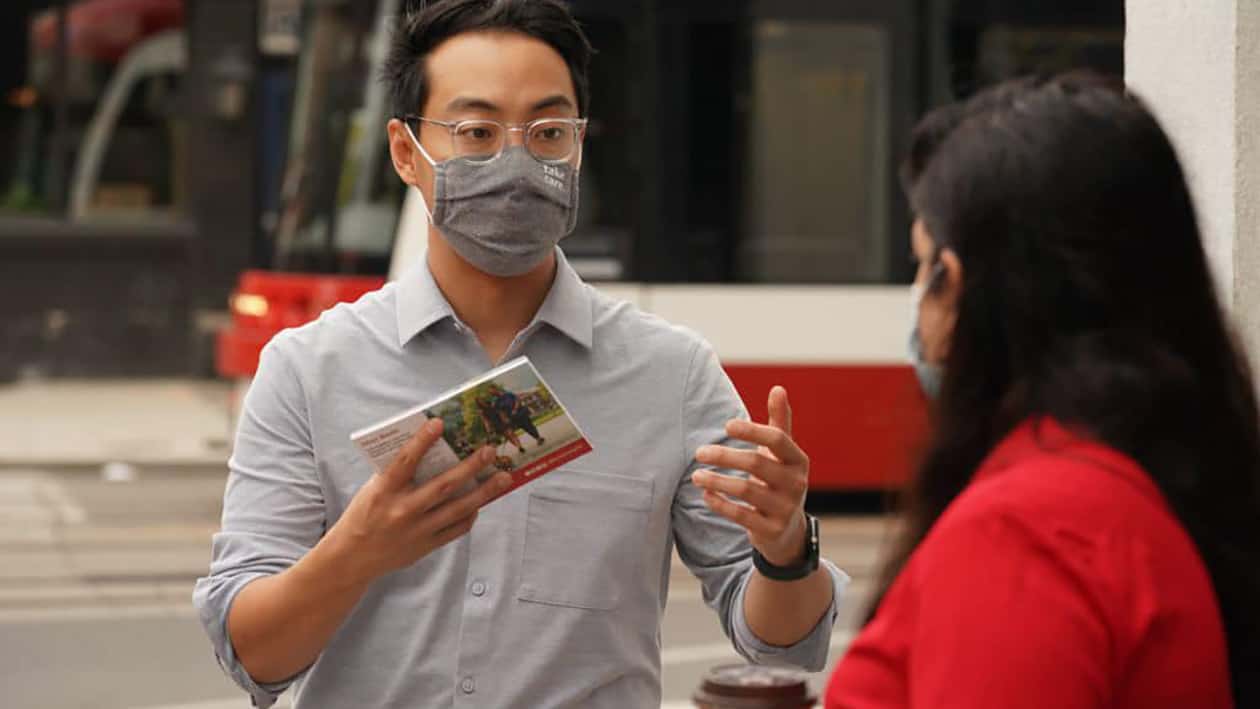 WINDSOR, Ont. — Liberal Leader Justin Trudeau says a Toronto-area candidate has been asked to pause his campaign after the party learned he previously faced a dropped sexual assault charge.

Trudeau said Friday that he learned about the allegations against Spadina-Fort York candidate Kevin Vuong after the Toronto Star reported on the 2019 charge against him, which was later withdrawn.

“We are a party that always takes seriously any allegations or reports of sexual harassment or intimidation or assault,” Trudeau said in Windsor. “That has been clear from the very beginning.”

He said his party had not been aware of the charge until the newspaper published its report on Thursday.

“We are looking into it very carefully and we have asked the candidate to pause his campaign,” he said.

Vuong said in a statement that the allegations are false.

“I vigorously fought these allegations when they were initially brought forward. The allegations were withdrawn. Had they not been withdrawn, I would have continued to defend myself against these false allegations,” he said.

“This resurfacing three days before the election is deeply troubling to me and my family. I will be taking some time with my family.”

Court documents confirm Vuong was charged with sexual assault in 2019 and that the charge was withdrawn later that year.

Brian Gray, a spokesman for Ontario’s Ministry of the Attorney General, said in a statement that the Crown “has a duty to assess the strength of a case throughout a prosecution, and is duty-bound to withdraw charges if there is no reasonable prospect of conviction, or if it is not in the public interest to proceed.”

The questions around the candidate came as the leaders are making their pitch to voters in the final days of the campaign.

At the same event in Windsor, Trudeau said he “took it personally” in 2019 when experts labelled the NDP and Greens’ climate plans as more ambitious than his own.

He said he didn’t want that to happen again and drew on more resources to develop a climate platform for this election, which he said is not just more concrete and realistic than the other two parties’ plans, but also more ambitious.

Trudeau spoke of his climate plan as he made a pointed plea to voters considering the New Democrats or the Green Party in the final days of the campaign.

He said the Liberal party is the only one that can stop the Conservatives from governing.

The Liberals are promising a 40 to 45 per cent reduction in greenhouse gas emissions over 2005 levels by 2030 — a target submitted to the United Nations earlier this year.

Trudeau was confronted on his way out of the event by a few dozen protesters, who shouted “Traitor!” as he greeted supporters on his way out to his bus. The Liberal leader is expected to make several other stops in southern Ontario on Friday.