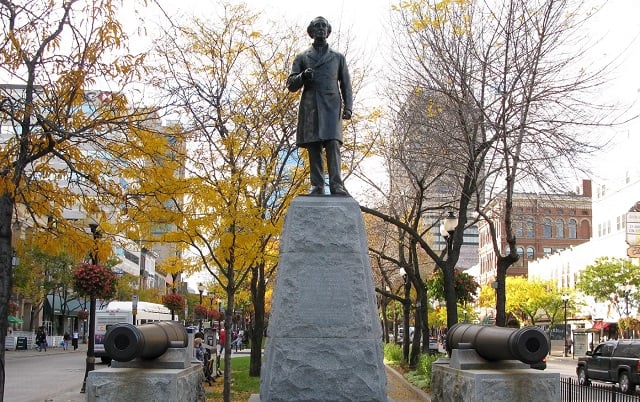 Indigenous activists and allies in Hamilton are planning to hold a rally  in what appears to be part of a renewed call to remove the downtown statue of Sir John A. Macdonald.

Jordan Carrier, a resident of Hamilton who is Plains Cree, has shared plans for an Indigenous Unity Rally on one of her social media channels. It called for gathering on Sat., Aug. 14 at 2 p.m. in front of Hamilton City Hall (71 Main St. W.).

Several Canadian municipalities and school boards that have removed Macdonald’s image and name from public spaces due to his hand in furthering the establishment of residential schools while he was Canada’s first prime minister. However, last month Hamilton’s city council voted 12-3 against a motion from Ward 3 City Councillor Nrinder Nann to put the Macdonald statue in Gore Park into storage until a landmarks and monuments review is completed.

Several delegators to a city committee also stated leaving the statue in place would undermine the review, which was approved by a 15-0 vote at the same meeting on July 9.

“The purpose of a statue is to assert, promote and celebrate cultural values,” Carrier wrote in a statement shared to her Twitter account. “By keeping this statue in a public space, it acts as a reminder of the values that lead to the forcible removal of Indigenous children and the destruction of families. It invokes great pain and forces community members to relive the trauma for which Sir John A. Macdonald is partially responsible.”

Carrier added that the vote contradicted both the Truth and Reconciliation Commissioner’s 94 calls to action, as well as a declaration of mutual commitment and friendship that was signed in July 2020.

“Removal of the statue provides an opportunity for City Council to demonstrate that Indigenous voices are being listened to,” Carrier added.

Prior to the July 9 vote, city councillors and Mayor Fred Eisenberger also received more than 1,000 letters in support of the statue’s removal. The five-councillor emergency and services committee heard from 11 delegators in regard to Nann’s motion at a meeting on July 8.

Eight of the 11 spoke in favour of its removal. One of the three opposed, historian Robin McKee of the local Sir John A. Macdonald Society, suggested the alternative of shrouding the Macdonald statue until the review is completed.

The landmarks and monuments review will cost $75,000 and will be covered by the city’s tax stabilization reserve. It is expected to be completed sometime in the fall.

The Indian Residential Schools Resolution Health Support Program has a 24-hour support line to help residential school survivors and their relatives suffering with trauma evoked by the recall of past abuse. The number is 1-866-925-4419.