Incredible Police Rescue of a Couple Stranded in Lake Ontario 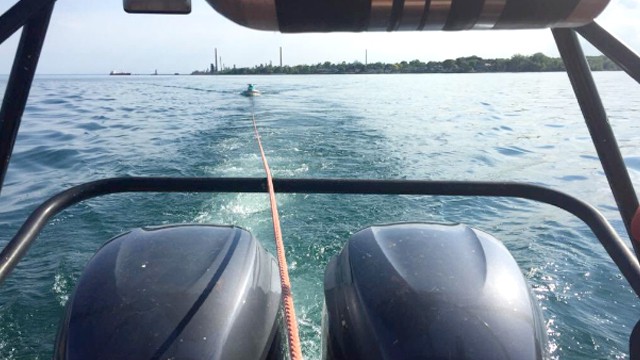 Peel Regional Police rescued a man and a woman on Friday after their Sea-Doo watercraft sank inLake Ontario, according to the QEW South Post.

Fortunately, the article reports that the pair had a cell phone with them and were able to call 911 as they floated in the lake, about a half-nautical mile (around 900 metres) from shore. They had also come prepared with life vests and a whistle.

“They were floating in the water when they called us,” Const. George Tudos told The Post.

The man was cold when officers got to him, but both people were otherwise fine and taken to safety.

Police also found and pulled in the sunken Sea-Doo, which had started to go under after it took on a large amount of water. It is believed to likely have been a mechanical error that caused the watercraft to sink.

Consider this a lesson both on and off the water – be prepared for anything and stay safe!

Marine Unit pulls in the disabled seadoo. Took on lots of water and started to go under. #boatsafety pic.twitter.com/nBc3lcRnSd