In a War of Independence, Mississauga has an Edge Over Brampton 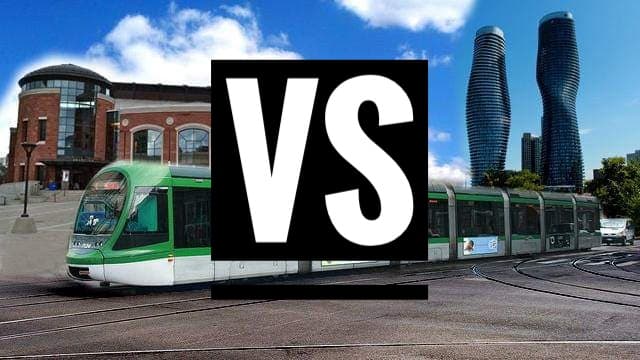 For close to 25 years now, Mississauga has been examining its relationship with the Region of Peel and found the partnership–imposed on it by the province–wanting.

In fact, recent events have made it crystal clear that Mississauga city council sees little benefit in remaining part of the regional government system that oversees Mississauga, Brampton and Caledon. The city wants to control its own destiny and operate as a single-tier municipality, much the same way big cities such as Toronto and Ottawa operate.

It’s also worth noting that much smaller cities–Hamilton, Windsor, London and Guelph, to name a few–are not beholden to regional governments.

Last week, Mississauga city council passed (in principle) Mayor Bonnie Crombie’s motion requesting the province pass legislation that Mississauga become independent from Peel. While Mississauga is able to govern most of its affairs, the Region of Peel oversees the local police force, waste management, public health and school boards (in the event of a separation, some things will change and others may not).

But while now is the perfect time to lobby the province for independence (as the Doug Ford government is conducting a regional government review), a MississExit probably won’t be carried out seamlessly with a handshake and the stroke of a pen. Neither Brampton or Caledon favour a split, and while Brampton Mayor Patrick Brown has dangled the daunting possibility of equalization payments in Mississauga’s face to deter the city’s ambitious reach for autonomy, it looks like Mississauga will have the edge when it comes to convincing the province to carve up the region.

While there’s no doubt that leaving the region would pose various organizational and bureaucratic challenges, Crombie has already begun making a solid case for exiting–and she’s not the first Mississauga mayor to bring this issue to the attention of the province.

Back in 2003, Hazel McCallion asked to leave the region and was rejected–but a changing of the guard at Queen’s Park has sparked the city’s hopes. As was mentioned earlier, the PCs are conducting a broad examination of regional government, specifically examining the regions of Peel, Durham, York, Halton, Niagara and Waterloo. The province is also looking at the Muskoka District and Simcoe County.

After Brown told Global News that Mississauga would have deal with a “debt owed to the city of Brampton” in the event of an exit, Crombie called the mayor’s insistence that Brampton helped subsidize Mississauga’s growth “categorically false.”

“You may read in the media some saying, including the Mayor of Brampton, that Brampton paid for Mississauga’s growth over the years,” Crombie wrote on Facebook. “This is categorically false. Facts are important.”

Crombie also argued that Mississauga supports the region to the detriment of its own residents.

“Now, even if development charges were not collected, for the history of the Region of Peel, Mississauga taxpayers have always contributed the vast majority of funding. From 1974-1995, we consistently paid over 70 per cent of the regional tax levy. At present, we pay 60 per cent. Based on these numbers, there is no way that Brampton paid for our infrastructure. That’s why Mayor McCallion led the charge to leave the Region in 2004. The math just doesn’t add up.”

Crombie said that Mississauga is contributing $85 million additional taxpayer dollars per year to subsidize Brampton and to a lesser extent, Caledon.

While these numbers work in Mississauga’s favour, Crombie is also presenting them well. Citing a recent corporate report, Crombie says data indicates that Mississauga is essentially overpaying for duplicate services–and speaking in terms of redundancies and efficiencies is speaking Doug Ford’s language.

In fact, the report says that a number of duplications, barriers and complexities in municipal service delivery could be eliminated if Mississauga became a single tier city. When dealing with a provincial government eager to make nips and tucks in the name of “efficiency,” it’s best to make cost savings the crux of your argument.

And honestly, the Ford government wouldn’t have publicly announced a review of regional government if it didn’t want to make some changes. In fact, it might already have a few in mind–some that might even involve amalgamating smaller municipalities into bigger ones (and while amalgamation didn’t manage to generate many savings for Toronto when Mike Harris glued a bunch of suburbs to the city in the 90s, it doesn’t mean the newly elected PCs won’t try the same thing in other areas).

Mississauga also has another huge advantage over Brampton in this debate and that advantage appears to be a place on Ford’s good side.

Last week, the province announced that it was proceeding with the Hurontario LRT after months of agonizing silence and worrying platitudes about, you guessed it, “efficiencies.” But there, of course, came a caveat–Metrolinx is chopping the City Centre loop, deferring a pedestrian bridge and changing the streetscaping along the corridor. This announcement–which came out of the blue and was reportedly made without much (if any) consultation with municipal partners–means that the route will contain three less stops than planned. It will also span 18 km instead of 20.

The city’s response to the changes was measured. Crombie started off by thanking the province for proceeding with the fully-funded, $1 billion+ project and emphasized how crucial it will be to Mississauga’s growth.

Diplomatic as ever, Crombie said that the city would like to see the loop constructed, but understands it might have to wait.

Even though the city would have every right to rage at the apparent lack of consultation prior to this major announcement, it did not. Crombie couched her concerns in an overall expression of gratitude and for good reason–the province had the power to scrap the project altogether. The PCs could have said that they had “no choice” but to cancel the LRT. They could have said an above-ground train was inefficient or outdated or an escalation in the war against the noble automobile.

They could have blamed Kathleen Wynne.

But they didn’t. And perhaps that’s because Crombie has been supportive of the province, choosing to promote Mississauga as a hub of economic activity that’s always “open for business.”

The situation in Brampton is markedly different. Rumours of frosty relations between Brown–who was ousted as PC leader after sexual misconduct allegations surfaced in early 2018–and Ford have persisted since Brown was forced out of provincial politics. As far as we know, the two men have yet to meet in any official capacity, even though Ford has met with other municipal leaders (including Crombie) since the municipal elections in October.

The province has also made some decisions that seem to target Brampton, albeit not always so directly.

Ford’s government announced it was cancelling the funding for Brampton’s university as soon as Brown was elected mayor last fall (although it also cancelled new campuses planned for Milton and Markham). Subsequent issues over hospital funding (which Brampton needs more desperately than most other GTA cities) and cancelling a much needed GO train line along Brampton (then bringing it back after public outcry) highlight the complications of Brampton’s relationship with the Ford government.

So, what does this mean?

Ultimately, the decision on whether or not to allow Mississauga to separate from the region lies with the province. Just as the province can slash Toronto city council, tinker with local GO train lines and cancel much-anticipated university expansions, it can tell Mississauga to back off or grant its wish. If Mississauga is making a business case for leaving the region, Ford might be more apt to reward a cooperative municipality (not that Brampton doesn’t cooperate, the issue is much more complex than that) that appears just as concerned about efficiencies as he is.

Since he hasn’t even met with Brown during any of his official visits to Brampton, it’s hard to imagine he would go out of his way to keep the region intact for Brampton’s benefit (or force Mississauga to provide the city with equalization payments in the event of an exit).

If Mississauga wants its independence, it needs to butter the biscuit at Queen’s Park. It’s already doing that, and that means it has a huge head start on Brampton.