How Important Is Hazel McCallion's Endorsement in Mississauga Elections?

Even at 97, the iconic former Mississauga mayor is still quite active around the city, showing up at public events and making appearances. So it’s no surprise that she occasionally chimes in on politics in Mississauga.

Sousa received Hazel’s blessing for his reelection bid as MPP in Mississauga Lakeshore, but was instead swept out along with all the other Liberal MPPs in Mississauga by the Tory blue tide.

That being said, her track record of endorsements has been impressive, so it’s no surprise that some council candidates are more than happy to publicly boast about any support that even sounds like an endorsement from the former mayor.

Stephen Dasko, who is running in Ward 1, recently put up this Facebook post on his campaign page. 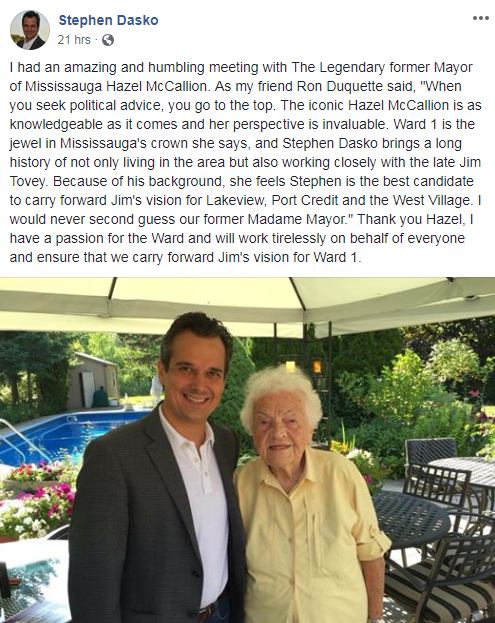 “The iconic Hazel McCallion is as knowledgeable as it comes and her perspective is invaluable. Ward 1 is the jewel in Mississauga’s crown she says, and Stephen Dasko brings a long history of not only living in the area but also working closely with the late Jim Tovey,” said Ron Duquette, a local community leader, adding that “she feels Stephen is the best candidate to carry forward Jim’s vision for Lakeview, Port Credit and the West Village.

However, while such glowing words attributed to the former mayor may sound like an endorsement, another Ward 1 candidate, former MP Brad Butt, said Hazel is not actually endorsing anyone in the municipal elections.

Duquette felt he needed to clarify his words from Dasko’s post, so he wrote this below:

In a series of text exchanges Duquette sent to insauga.com, he notes that the former mayor was supportive of Butt if he was still running in Ward 6, but not in Ward 1; Duquette himself is backing Dasko. Earlier Butt himself cited ‘support’ from Hazel while he was still a prospective candidate for Ward 6, where incumbent Ron Starr was planning to retire, but changed his mind and ran again.

Butt vs Duquette by Alan Kan on Scribd

Butt and Duquette also had disagreements over how the request went out for Ward 1 candidates not to campaign during the annual Southside Shuffle event in Port Credit, which Duquette helps organize.

The other Ward 1 candidates are Terry Burke, Natalie Hart, Larry Mancini, Marco Pedri, Miles Roque and Sharmila Setaram. While that looks like a good solid list of potential successors for Tovey, some are not convinced.

“Having attended many important community meetings since the last election like Inspirations Port Credit and Lakeview, Lakeshore Connecting Communities, Dundas Connects, Vision Cooksville, Mississauga Moves, Parking Matters and more, I have seen many of the same engaged citizens like Dorothy Tomiuk, Chris Mackie, Nicole Hansen, John Wilson and others, but not these new municipal candidates,” Jonathan Giggs, a Citizen Member Mississauga Cycling Advisory Committee and President of Mississauga South Historical Society, said in a statement to insauga.com.

“If they attended at all, it has only been within the last year, and seemingly for a photo opportunity,” he concludes.

How important are Hazel McCallion’s endorsements are to municipal elections even four years after she’s left politics herself? The Ford example is most recent, as well as her previous endorsement of Liberal leader (now Prime Minister) Justin Trudeau.

In 2014, McCallion showed up to a Bonnie Crombie fundraiser at the Emerald Chinese Restaurant and said she was ‘endorsing’ Crombie’s platform, though not necessarily the candidate herself.

There is also the matter of the difference of meaning between the words ‘support’ and ‘endorse’. Hazel clearly endorsed Ford during the provincial election, but saying you support someone may not necessarily mean they endorse you to win; you can support multiple people who you think are qualified and wish them all the best.

It just sounds like a bit of political intrigue bubbling up through the surface as this municipal election campaign in Mississauga rolls along.

Greek Palace reopening on Rymal Road in Hamilton
Don’t call it a comeback — Greek Palace has been satisfying soulvaki cravings in Hamilton for years.
END_OF_DOCUMENT_TOKEN_TO_BE_REPLACED