If there's one thing everyone in Mississauga (and the GTA, for that matter) can agree on, it's this: It's very expensive to live in the city.

With detached houses averaging $900,000 and condos costing buyers over $400,000, it's not surprising that rental rates have climbed in step with housing prices. If you take Mississauga's low rental inventory rate into account—a recent report said that the city's vacancy rate sits at 0.8 per cent—the higher rates make even more sense (high demand, low supply).

According to a rent Toronto Real Estate Board (TREB) report, the GTA market is still quite tight—and prices are up.

TREB says that, based on rental listings and transactions reported by GTA realtors through TREB’s MLS system, rental market conditions remained very tight in the fourth quarter of 2018.

TREB also says average rents for one-bedroom and two-bedroom condominium apartments were up substantially on a year-over-year basis.

As far as Mississauga goes, the average lease rate for a one bedroom apartment sits at $2,000. In 2016, the city's Making Room for the Middle plan (a plan that was produced to help the city provide more affordable housing for middle-class residents), said that one-bedroom units were renting for an average of $1,200.

“The Greater Toronto Area has seen significant growth in its economy throughout 2018. It has become a primary destination for companies in various industries who are attracting younger talent who have a desire to live in the region," says Garry Bhaura, president, TREB.

"This desirability has contributed to the continuation of historically-low vacancy rates, strong competition between renters for available units and, as a result, very strong growth in average rents."

As for what else is driving rates, a recent Rentals.ca report says other factors driving rental rates higher include prospective homebuyers choosing to stay in rental units due to high housing prices, homeowners staying in their homes for longer, higher interest rates and an increase in international immigration.

TREB also says that inventory remains low across the GTA, even though the fourth quarter saw more listings hit the market.

The report says the number of condominium apartments listed was up 16.6 per cent compared to the same period in 2017, outstripping the seven per cent annual growth in rental transactions. While that's encouraging, TREB says the trend will have to continue in order for the market to be more balanced.

And while rental rates are currently quite high in Mississauga, a recent report anticipates that prices will increase further in 2019.

In fact, the Rentals.ca report indicates that rental rates could climb a whopping 10 per cent. 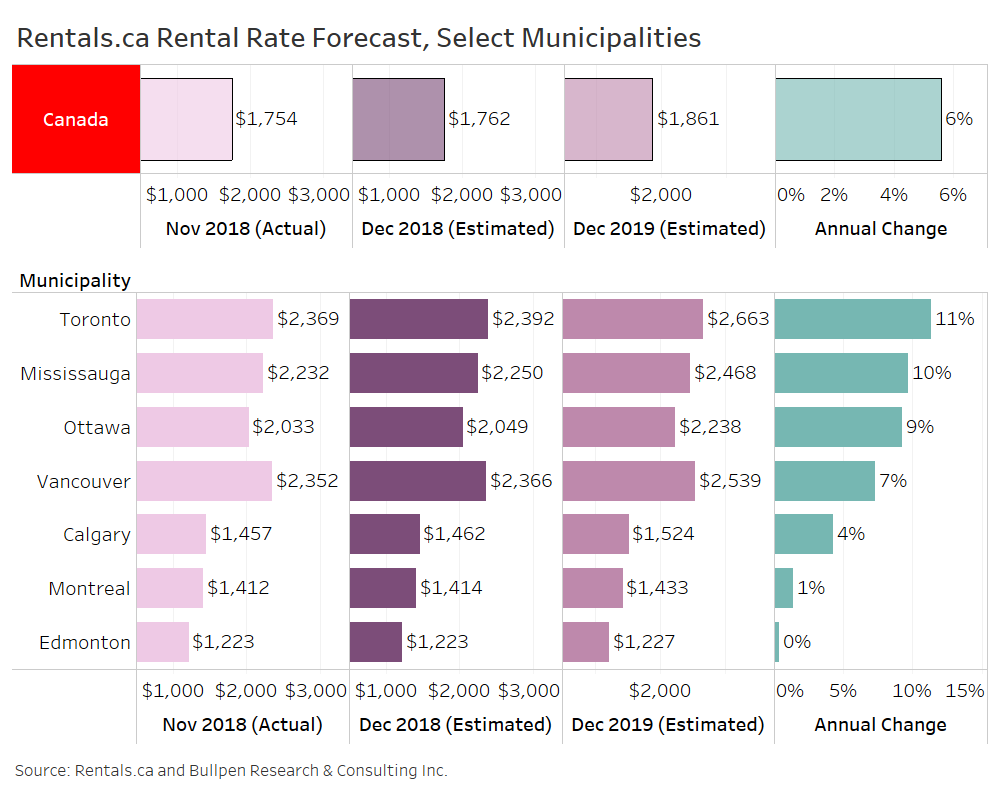 While Mississauga is working to generate more units by approving more purpose-built rental developments (one is coming to the Sheridan neighbourhood in the future) and protecting its current rental stock through a newly-implemented bylaw that will require developers to replace any rental stock that they demolish, it's important that more inventory be produced across the board.

“It will be important to continue monitoring the supply of rental condominium apartments. While TREB certainly supports the recent rent control exemptions announced by the provincial government, this change does not benefit all investor-owners of condominium apartments, who have provided much of the new rental stock over the past decade," says Jason Mercer, TREB’s director of market analysis.

"It is conceivable that rent controls could prompt some investors to consider selling their units and investing the proceeds in another asset class.  This scenario could obviously compound an already problematic rental supply issue in the GTA.”

Trendy dessert spot opening new location in Square One in Mississauga
Square One is now home to some of the tastiest culinary hotspots in Mississauga, but no shopping centre can ever really have too many food and drink joints.
END_OF_DOCUMENT_TOKEN_TO_BE_REPLACED