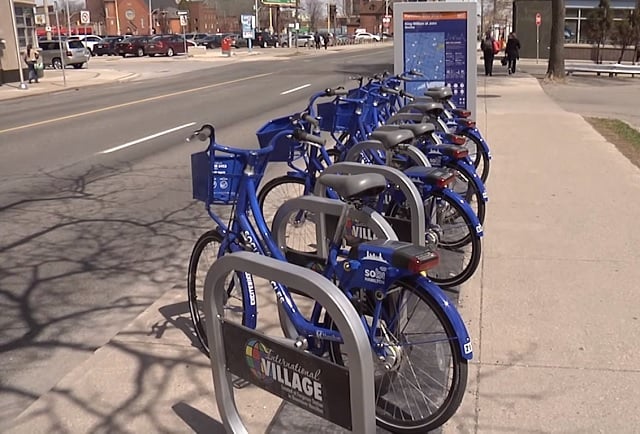 Firstly, Hamilton’s city council on Friday agreed to cover the estimated $50,000 shipping, storage, and re-branding costs for Hamilton Bike Share Inc. (HBSI), which is a non-profit, to added 625 bicycles donated from the city of Portland, Oregon. The bikes were surplus in Portland after it switched its social-bicycle fleet over to pedal-assisted bikes last autumn.

Earlier reports suggested that most of the bikes will be added to Hamilton’s fleet, and some will be used to replace parts on bikes in HBSI’s current fleet in order to extend their lifespan. While Hamilton’s social bicycles are blue, the new ones from Portland, which could be available by the spring, are orange.

The HBSI covers its costs through internal fundraising, sponsorship, user revenue and organizational contributions. It has about 800 bikes in its fleet, The system is capped at 900, but having additional bicycles will provide some options to handle increased demand, which would in turn increase revenue. The program has around 26,000 members, with pay-as-you-go, monthly and seasonal supporter plans that last six months at time.

Also Friday, HBSI announced that it has signed a three-year sponsorship agreement with Cogeco Connexion Inc., the cable television and digital internet provider. Cogeco logos have been added to HBSI’s bikes.

BACCC Manager Bianca was on @cable14 this morning to help announce an exciting new partnership between @cogeco and @hamiltonbikeshare. A strong bikeshare program is crucial for meeting our climate targets in #HamOnt pic.twitter.com/0fwcqT9CuH

Hamilton Bike Share has 130 hubs over a 25-square-kilometre area from Ottawa Street in east Hamilton to Dundas. Its contract is up at the end of 2022.