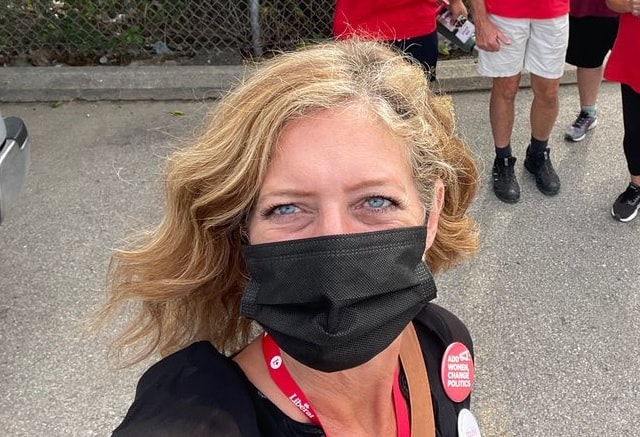 The Liberals’ Lisa Hepfner and the New Democratic Party’s Malcolm Allen might go to bed not knowing who will represent Hamilton Mountain on Parliament Hill.

In the tightest race in Hamilton’s five electoral districts, Hepfner leads Allen by just over 400 votes in the only race where a seat could be flipped.

As of 12:45 a.m. on Tuesday, the Liberal Party of Canada challenger was up 292 votes over the New Democratic Party’s Malcolm Allen. The race is one of two in the Hamilton area with three viable candidates, with Conservative Party of Canada hopeful Al Miles about 3,500 votes adrift of Hepfner.

Mail-in ballots were to be counted on Tuesday. Most major broadcasters declared a Liberal minority government around 10 p.m. ET.

InSauga is providing live election results. Here is a survey of the area ridings.

Both Hepfner (34.0 per cent) and Allen (33.0) are in a tight race. About two-thirds of votes in the riding typically go to the Liberals and the NDP. However, the NDP have won the seat in five consecutive elections.

The CPC’s Al Miles is pulling 25.0 per cent, which is in line with traditional Conservative support on the Mountain.

However, over 3,000 mail-in ballots were requested in the riding.

The riding went up for grabs when Bob Bratina opted not to run again for the Liberals after breaking with the party over its support of light-rail transit.

The riding’s been called for Muys, who had a tight-ish margin over the Liberals à la his former boss, David Sweet, in the 2019 election.

Almost one-quarter of the polls — 191 of 251 — are MIA, but cabinet minister Tassi has been declared elected with a double-digit lead.

Tassi has received 41.0 per cent support, putting her in front of the CPC’s Bert Laranjo (28.0) by more than 4,400 votes. The NDP challenger, lawyer Roberto Henriquez, has earned 23.0 per cent, marking the first time that the New Democrats have broken out of the teens since the riding was formed three elections ago.

It was easy being Green at the ballot box. While he will be the lone NDP repping Hamilton on Parliament Hill, Green was the first declared winner in Hamilton after receiving 48 per cent support — the most of any candidate in the area.

Liberal challenger Margaret Bennett is pulling about 26.0 per cent, with the CPC’s Fabian Grenning at 15.

It’s the second consecutive election where Green has had a 20-point margin over the Liberals.