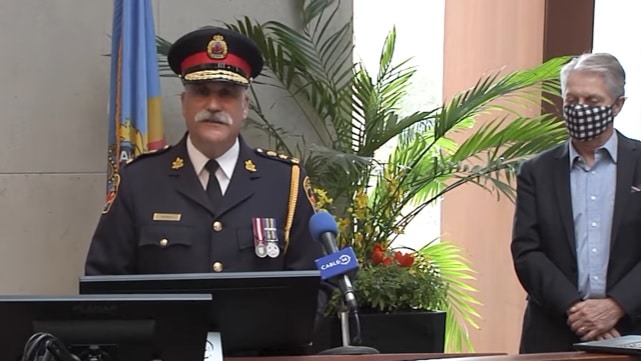 The Hamilton police had a 10-year high in use-of-force incidents last year — and the circumstances of every one can now be examined.

On Thursday (July 22), the Hamilton Police Service (HPS) said it will now share information about each instance where its officers used force. The new template now includes the division where the interaction occurred, the occurrence type, how the call originated and what police unit was involved in the interaction. It also shows the perceived racialization of each person whom officers used force against.

“We’ve heard the calls for increased transparency related to the Use of Force data and we listened,” HPS Chief Frank Bergen said in a statement on Thursday. “We understand the community wants more information about why our officers attended these calls and the situations they faced. This information is important in order to continue moving the conversation forward in better-serving our communities.”

The move marks one of the first changes to HPS under the command of Bergen, who was sworn in as chief on May 7.

The change comes after a year of social justice activists, including members of the Black Live Matters movement, calling for policing reforms in the city. Last year, the City of Hamilton police board voted on, but did not go ahead with, a 20-per-cent reduction of the HPS budget.

The HPS presents its use of force report to the City of Hamilton police board annually. Last month, its report showed that officers used force 431 times in 2020, which was the most in any single calendar year since 2011.

As well, last year 18 per cent of people involved in use of force were perceived as Black. Less than 4 per cent (3.8) of Hamilton’s population is Black, according to the 2016 Canadian census.

The newly released incident data, which is available in a 21-page PDF, shows that the downtown-area Division 1 accounts for largest share of use-of-force incidents. One hundred and eighty, or 41.7, occurred within Division 1. That patrol area runs east-west from Sherman Avenue to Main Street West as far as Dundas, and north-south from the Cootes Paradise of the Burlington Bay to the Niagara Escarpment .

There were 152 incidents, or 35.2 per cent, in east-end Division 2. That patrol area runs from Sherman Avenue on the west to the east border of Stoney Creek, and north from the mountain brow to Lake Ontario.

Eighty-eight incidents, or 20.4 per cent, occurred in Division 3, which patrols Ancaster, Binbrook/Glanbrook, Dundas, Flamborough and the Hamilton Mountain.

The others were unknown, or occurred outside of HPS jurisdiction.

The @HamiltonPolice have responded to this request by releasing more Use of Force data. We'll respond to this data soon. #HamOnt #onpoli https://t.co/fUNnBxUfy0 https://t.co/Xb1W9AcnU5