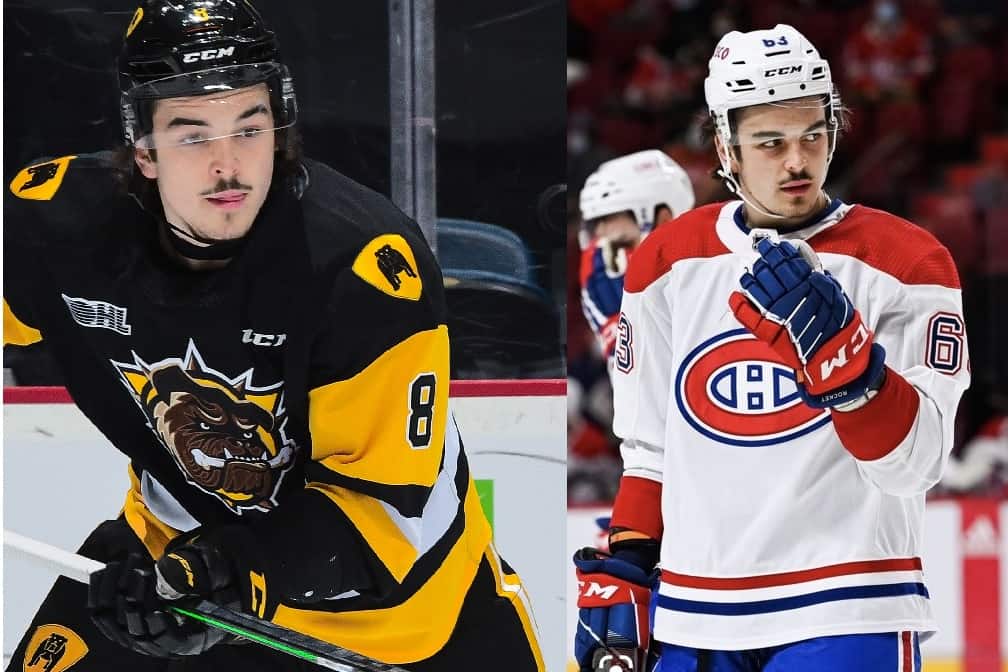 Hamilton native Arber Xhekaj has made the Montréal Canadiens.

Arber Xhekaj, who takes away opponents’ time and space, has gone from Costco employee to wearing the most famous ‘C’ crest in sports in the space of a year.

Some roster management by the Montréal Canadiens this morning (Oct. 11) confirmed that the 21-year-old defenceman from Hamilton, the namesake son of a refugee from Kosovo, and a player who was never drafted into any top-tier league, will début in the NHL tomorrow. The Canadiens and the forever rival Toronto Maple Leafs face off at the Bell Centre on Wednesday (7 p.m., Sportsnet/RDS/FAN 590). Xhekaj, whose maturation included playing with the St. Catharines Falcons before beginning an Ontario Hockey League run that he capped off by being central in the Hamilton Bulldogs’ Ontario Hockey League championship season in June, essentially had to make the NHL roster out of training camp.”

Xhekaj’s first NHL game will come 373 days after he signed his first pro contract with the Canadiens.

“I texted my family group chat and said, ‘Xhekajs, I made the opening night roster,’ ” Xhekaj (pronounced JACK-eye) told the media in Montréal on Monday. I haven’t checked my phone after that… I am definitely taking it day-by-day here and I’ll earn my spot every day.”

During the OHL’s 19-month pandemic pause, Xhekaj worked at a Costco big-box store and, as he has said in media interviews, hoped he would get a chance to reward his parents for their sacrifices in supporting his hockey path. His father Jack (whose given name is Arber) came to Canada as from Kosovo as a refugee in 1994 during the Bosnian War. His his mother Simona is originally from Czechia.

“The past two years have been the craziest years that a kid like me could have,” Arber Xhekaj said on Monday. “It (his first NHL game) is going to be super-special for my parents… They (Canadiens hockey operations) told me you’ve had a great camp and just keep going.”

A year ago, Arber Xhekaj was working at Costco. On Monday, the undrafted Kitchener Rangers defenceman signed a three-year, two-way contract with the @CanadiensMTL. "Everything has happened so fast." https://t.co/txKxgq3c3E

The Canadiens have placed Paul Byron on LTI and recalled Arber Xhekaj from the Laval Rocket. pic.twitter.com/3HhcXgmKFY

Xhekaj, who is 6-foot-4 and 238 pounds, honed a menacing affect over his years in the OHL, first with the Kitchener Rangers and then with the Bulldogs. One well-circulated scouting report says, “It’s like his NHL comparable is Carnage from Spider-Man. He’s a menace out there.”

Like Leafs wing Wayne Simmonds and other late bloomers, Xhekaj will have the distinction of becoming an NHLer without being drafted at the OHL level, let alone the NHL.

The OHL is a pro-format league for players 16 to 20 years of age, which leaves players with a tight window to grow into their bodies and develop their skills. Larger and taller hockey players often have a longer arc with developing their skating accelation and agility, along with acumen in the offensive zone.

After a season in St. Catharines, Xhekaj made the Rangers — who then had current Bulldogs head coach Jay McKee was behind the bench — in 2018-19. Word quickly got around about his physical talent. Building out his game, though, was challenged when the COVID-19 pandemic forced the OHL to suspended competition in March 2020. It did not resume for nearly 19 months, with teams playing a regionalized schedule last season with little-to-no interconference regular-season play.

All told, Xhekaj was passed over in the OHL priority selection, and NHL entry drafts in 2019 and ’20, before inking his deal with the Canadiens last October. Over his run in the OHL, he went from having just three points in his entire rookie season to averaging nearly a point per game in playoffs last spring.

“It shows you’re never really done until you’re done,” he said. “I think I have proved that for a lot of kids.”

While his first NHL game will come in Canada’s forever rivalry, Xhekaj might also have a bulls-eye around him in the minds of the Habs’ other Ontario rivalry. Ottawa Senators coach D.J. Smith said after an exhibition game last week that the Canadiens were targeting Ottawa players. In that contest, Xhekaj took a shot at Ottawa wing Tim Stützle. Soon after, Ottawa wing Austin Watson laid a heavy bodycheck on the Canadiens’ Kirby Dach. Xhekaj swooped in, and there was some instant carnage for Watson.

The Canadiens and Senators are not slated to meet until Dec. 14.

Meantime, the Bulldogs continued to be graced by the Xhekaj family. Eighteen-year-old Florian Xhekaj, Arber’s brother, is a first-year left wing for Hamilton, and has two goals in his first four OHL games.