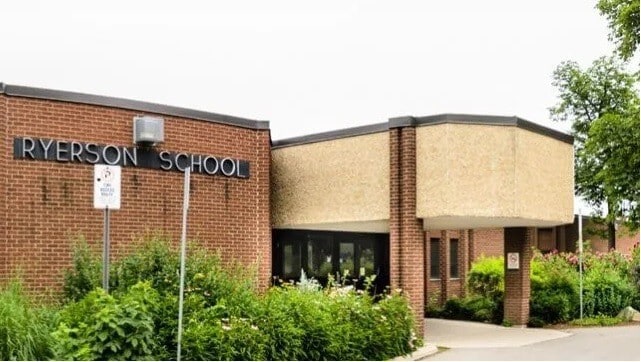 Indigenous communities in the Hamilton area will be involved in renaming a school whose ex-namesake is tied to countless traumas.

On Monday, Hamilton-Wentworth District School Board (HWDSB) passed a resolution that Ryerson Elementary School will have a new name. Egerton Ryerson was the architect of Canada’s residential school system, where generations of Indigenous children were abused and died in care, with much of that pain passed intergenerationally.

The motion that HWDSB trustee Cam Galindo introduced, which was adopted Monday, calls for the public school board to review the names of schools named after individuals.

“Be it resolved: in the spirit of Truth and Reconciliation, that an Indigenous process that is both locally relevant and responsive be struck to rename Ryerson Elementary School, through ethical engagement and in consultation with local Indigenous communities and key beneficiaries and stakeholders.”

It passed unanimously, as amended! Ryerson Elementary School will be renamed, following an indigenous process; and all HWDSB school names will be reviewed, in the spirit of Truth and Reconciliation, to ensure they reflect our board’s mission, vision, values! #HamOnt #215children pic.twitter.com/PzJExsx2fn

Indigenous communities have been expressing the intergenerational trauma of residential schools for a long time, and today, even if just for a little bit, we are listening. And I hope that we continue to listen!

Galindo said last week he would introduce the motion. The announcement came amid nationwide revulsion after the remains of 215 children were found with ground-detecting radar at the site of one of the schools in Kamloops, B.C..

Between 2008 and ’15, the Truth and Reconciliation Commission, which heard from some 6,500 witnesses, confirmed that thousands of children died while at the institutions.

Many educational institutions in Ontario are named after Ryerson since he is the founder of the province’s public education system.

On Sunday, a statue of Ryerson was pulled down by demonstrators at Ryerson University in downtown Toronto. The university said the statue would not be replaced or repaired.

Hamilton Bike Share has already removed Ryerson’s name from all of its digital and physical assets.