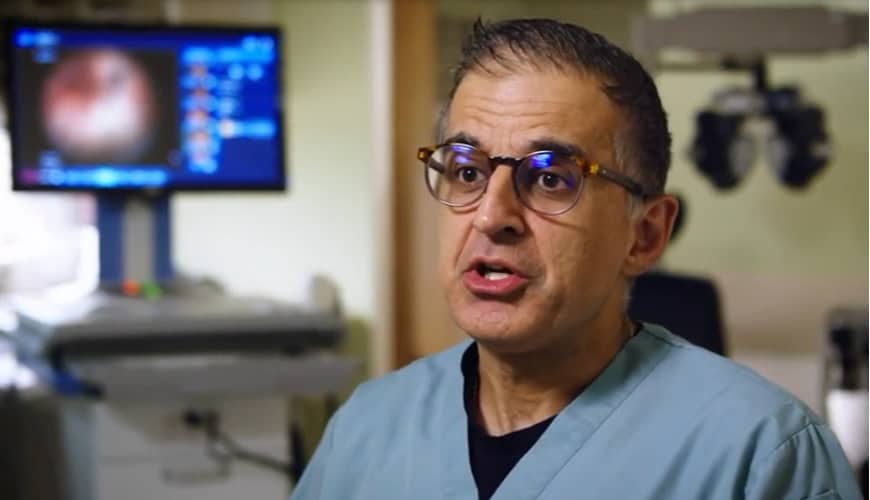 A Hamilton doctor at McMaster Children’s Hospital is part of a partnership that is improving eye care for thousands of Indigenous children who live in Ontario’s Far North.

Dr. Kourosh Sabri, a pediatric ophthamologist, has been visiting the Far North to give children eye exams for about six years. But it is only possible to give about 20 children eye tests in one visit, and some travel far south and miss a couple days of school to have their eyes checked. Now, through a federally funded partnership with Weeneebayko Area Health Authority called the Indigenous Children Eye Examination (ICEE) program, it is possible to have remote link-ups where children can have their eyes examined, receive glasses and be monitored for eye conditions.

Sabri notes there is a direct correlation between vision health and any child’s emotional and physical development.

“Vision screening in children is of paramount importance,” Dr. Sabri says in an introductory video about ICEE. “Children can have eye problems which can go under the radar. They can grow up with poor vision in one or both eyes without anyone knowing.

“Up to 80 per cent of a child’s development depends on good vision — physical and emotional development.”

Software developers at McMaster University created an interface which allows patients to connect virtually with doctors at MCH. Instead of reading an eye chart posted on a wall in a dimmed doctor’s office, the child reads off a large screen and enters letters and numbers.

The $1.7-million program is funded through Indigenous Services Canada through Jordan’s Principle, which is intended to ensure First Nations children have the same access to public services as other children in Canada. It is one of the first such programs that has been offered to children in the James Bay region.

The Weeneebayko Area Health Authority says the partnership on vision care for children could be a positive for some 6,000 children. The health authority looks after the Weenusk, Fort Albany, Kashechewan, Attawapiskat, Moose Cree and MoCreebec Eeyoud First Nations, and the Town of Moosonee. Not having to travel overnight for an eye test obviously means less disruption in a child’s routine.

“It is estimated there are approximately 6,000 to 7,000 children living along the James Bay coast, who don’t have access to vision screening in their communities and have to travel far south, and miss a few days of school, to obtain vision care services,” says Lynne Innes, president and CEO of Weeneebayko Area Health Authority.

A similar partnership, Eye Mac, was formed several years ago. The not-for-profit initiative involves Hamilton eye care care professionals, school boards and McMaster to deliver free vision screening to school children. Since it launched, it has tested the eyes of over 10,700 children. Nearly one third, over 3,500, were found to have a vision problem.

Despite that, Sabri points out that fewer than 1 in 6 children in Canada have their eyes tested before their sixth birthday. It is even rarer in sparsely populated areas such as the Far North.

Sabri says there is no reason why a program such as ICEE cannot work in other remote communities.

“Only 15, 16 per cent of children under the age of six ever receive an eye exam — and that is including the urban areas,” he says. “So it is very important for us to develop a national universal vision screening program for children, so regular vision screening is done and any child with a vision problem is treated in those very formative years.”

“Our hope is that this can be replicated in other geographically remote and underserved areas of Canada,” he adds.