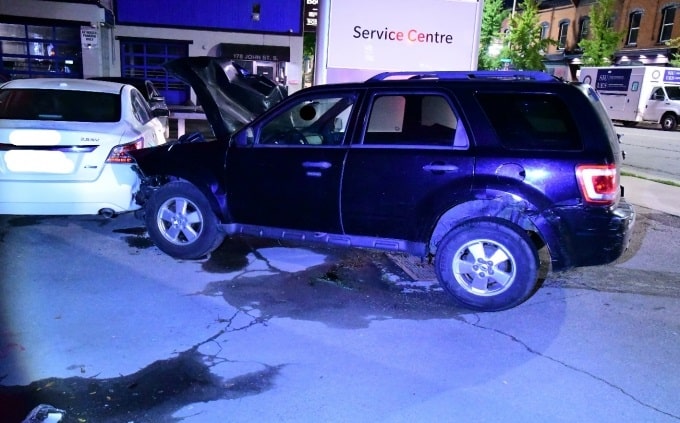 Two men were killed after a black Ford Escape collided with a Hyundai Sonata. (Photo: SIU)

A Hamilton Police officer who tried to stop an SUV moments before it was involved in a crash that killed two people has been cleared of any wrongdoing in the incident.

Ontario’s Special Investigations Unit (SIU), which looks into matters in which civilians have been seriously hurt or killed during interactions with police, released a statement today (Jan. 23) saying that there are “no reasonable grounds to believe the officer operating the police van committed a criminal offence in connection with the incident. As there was no basis for proceeding with criminal charges in this case, the file has been closed.”

Moments earlier, the subject police officer, who was at the centre of the SIU probe, was driving a police van when he spotted a Ford Escape being driven erratically.

The officer tried to stop the SUV, but was unsuccessful and the vehicle continued on. Seconds later, the Escape accelerated its speed and collided with a Hyundai Sonata at the intersection.

The two men who were killed were passengers in the back seat of the Sonata, the SIU said.

The drivers of both vehicles suffered serious injuries.

The SIU was notified of the incident as the police van had become involved moments prior to the deadly crash.

In presenting his decision, SIU director Joseph Martino wrote that the subject officer “was engaged in the lawful exercise of his duties when, having observed a vehicle being operated carelessly, he decided to stop it for investigation.

“Having made that decision, I am satisfied that the officer comported himself with due care and regard for the safety of the public when” the driver of the Escape fled from the scene of the stop.