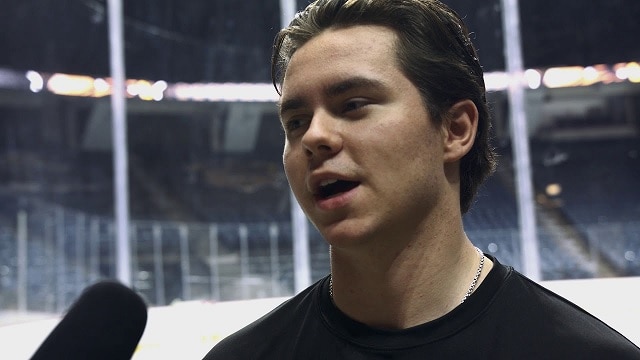 Nathan Staios has pulled off a Hamilton Bulldogs first.

The Oakville native became the first Bulldogs player garnered the accolade of Ontario Hockey League defenceman of the month, the league announced on Wednesday. Over 10 games in November, the 20-year-old Staios posted 12 points (three goals, nine assists) and a had plus-9 plus/minus rating. His presence on the back end helped Hamilton post a .700 point percentage for the month. It is the first time a Bulldog has earned the honour since the team relocated to Hamilton in 2015 from Belleville.

On the season, Staios is tied for third in OHL defenceman scoring with four goals and 19 points over 20 games. The son of longtime NHL defenceman and Bulldogs president and general manager Steve Staios has notched 101 points over 198 lifetime OHL regular-season games between Hamilton and the Windsor Spitfires.

Last season, when the OHL suspended competition due to the COVID-19 pandemic, Staios got his feet wet in pro hockey with a six-game stint with the American league’s Utica Comets. He also represented the St. Louis Blues at the Traverse City Prospects Tournament this past fall.

The Bulldogs, whose .675 point percentage is pacing the OHL’s Eastern Conference, will put a five-game point streak on the line in Barrie on Thursday night. Following the matchup against North Bay on Friday (Dec. 3, 7 p.m.), they welcome in the Erie Otters on Sunday afternoon (Dec. 5, 2 p.m.).