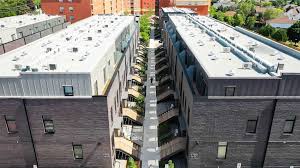 For the first time in six months, Toronto condominiums no longer dominate the list of properties with the highest appreciation rates over the past year. If the latest data is any indication, it appears that condos outside the city are offering much higher returns on investment.

Oshawa condos – especially relatively inexpensive townhouses in the city’s south end – dominated the list, with four in the top ten. A Whitby property also made the list – compiled by real estate giant Strata.ca, which specializes in condos – giving Durham Region half the entries.

A luxury building in Yorkville was the only Toronto property to make the list.

“This may simply reaffirm what many of us have known all along,” says Robert Van Rhijn, Broker of Record at Strata. “Homebuyers are increasingly looking outside city limits for affordability, and the data is finally starting to reflect that trend.”

In Toronto, condos are selling on average for about $895 per square foot compared to just $647 in Burlington and $505 in Oshawa.

“By looking outside the city, you’re buying into a market at much cheaper prices with the potential to earn back that investment at a much quicker pace,” explains Van Rhijn.

The latest appreciation data simply illustrates the spillover effect from Toronto’s red hot housing market where the average price of a condo is just over $720,000, according to Nathaniel Hartree-Hallifax, a realtor at Strata.ca. When it comes to buying something decent in Toronto, a lot of people have “psychologically written that off”, as he puts it. “So they’re moving around to places outside the city that they can afford.”

Strata.ca broker Cliff Liu caters to a wide demographic of buyers, including baby boomers in Toronto’s outskirts. He thinks this group may be fuelling those soaring appreciation rates as well.

“Many seniors are cashing out on their suburban homes, and choosing to downsize in these same neighbourhoods,” says Liu. “So they’re also adding to the demand, driving up values even faster in these areas.”

Hartree-Halliax notes the famous slogan that “a rising tide lifts all boats” to illustrate the impact of Toronto’s rising prices on the wider region.

“Even still, properties outside the city have so much more room to appreciate,” he explains. “Whereas condos in Toronto have already hit that glass ceiling of affordability.”