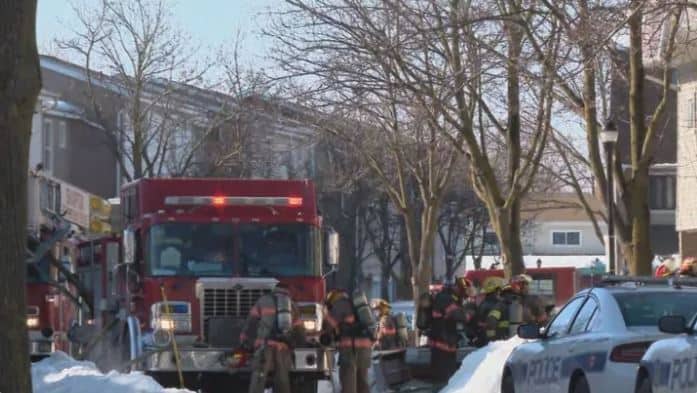 Many are left grieving in Brampton after the deaths of three young brothers, killed in what officials are calling a tragic housefire.

Emergency crews were called to a townhouse complex on Ellis Dr. near Torbram Rd. and Clark Drive shortly after 9:00 a.m. on Thursday.

When first responders arrived on scene they were met with heavy smoke and flame as one of the townhomes was fully engulphed in flames, according to Peel Regional Police.

Three boys aged 9, 12 and 15 were pulled from the burning home and rushed to hospital in life-threatening condition where they were later pronounced dead. A firefighter was also treated at the scene for minor injuries.

One local community group of mothers has rallied behind the family with a GoFundMe page to help with rehousing, funeral costs and food.

“On behalf of Malton Moms and the community, we extend our most heartfelt sympathy for this loss,” the Malton Moms group said on the crowdfunding page dedicated to the boy’s family. “The family is devastated and asking for help to rebuild their lives after this tragedy.”

The three brothers are survived by their mother and a 5-year-old brother, the group said in a post.

Peel Regional Police Const. Akhil Mooken told reporters that the boy’s mother went to drop off another child at school and returned home “and discovered the home was engulfed in flames.”

He said police are not investigating the fire as “a neglect type incident” and called the deaths “a tragic circumstance.”

The Ontario fire marshal’s office is investigating and will work to determine the cause, origin, and circumstance of the blaze.

News of the boy’s deaths led to a wave of support for the family from members of the Brampton community and beyond, with Mayor Patrick Brown saying he was heartbroken to learn the brothers did not survive the fire.

On Thursday evening, flags at all City of Brampton facilities were lowered to half-mast and the City Hal clock tower will be dimmed in memory of the three children.

“The city extends our deepest condolences to their friends and family and our entire community,” the city said in a post to Twitter.

You can donate to the family by visiting the Malton Moms GoFundMe page.