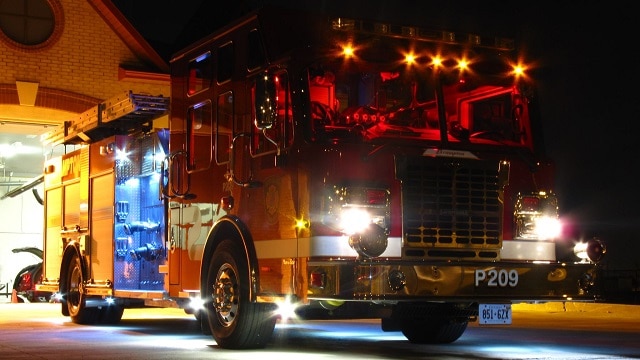 Three Brampton children have died after a fire broke out in a townhome on Thursday morning.

Mayor Patrick Brown made the announcement on Twitter and Brampton Fire Chief Bill Boyes confirmed the deaths of three young boys as a result of the fire.

Boyes said the victims were 9, 12 and 15-year-old boys who were pulled from the home and died later in hospital.

The chief said there were no adults in the home and the boys were found on the second and first floors of the townhouse.

The victims were rushed to hospital in life-threatening condition after a fire in a residence near Clark Blvd. east of Torbram Rd. Peel Regional Police said emergency crews were called to the home shortly after 9:00 a.m.

The residence was fully engulphed in flames and fire crews were faced with heavy flames and smoke when they arrived.

Smoke could be seen coming from the townhome as firefighters were on ladders working to knockdown the blaze. Boyes said there was significant damage to the home.

A spokesperson for Peel Regional Police said officers arrived on scene before firefighters and tried to make entry into the home but were unable to gain access.

One firefighter was also suffered minor injuries in the fire but was not transported to hospital.

Boyes extended “deepest condolences” to the families and friends of the victims on behalf of Brampton Fire and the City of Brampton, saying it was a “heartbreaking day for the whole community.”

Brampton Fire and Emergency Services have not commented on how the fire may have started, and the Ontario fire marshal’s office has sent a team of investigators to try and determine what caused the blaze.

Mississauga Fire said it was providing assistance to emergency crews from Brampton.

Mayor Brown said he was heartbroken by the news, and Ontario Premier Doug Ford called the incident a tragedy.

On Thursday evening, flags at all City of Brampton facilities were lowered to half-mast and the City Hall clock tower will be dimmed in memory of the three children.

“The city extends our deepest condolences to their friends and family and our entire community,” the city said in a post to Twitter.

Editor’s note: an earlier version of this story said the victims were 16, 15 and 10-years-old.

While we all mourn, I want to acknowledge the heroic actions undertaken by all our firefighters, commanding officers & dispatchers along w/ @PeelPolice & @Peel_Paramedics who were faced with extremely difficult fire and weather conditions today. Thank you 🙏 https://t.co/mvzaRRDCGp

I want to acknowledge the efforts of all the firefighters on scene who faced extremely challenging fire conditions & risked their lives to try save these 3 children. https://t.co/eX93p3DDQL

UPDATE:
– 3 occupants have been transported to hospital in life-threatening condition
– Media officers @AkhilMooken and @K9Qaybre are on scene.
– Media staging point is parking lot at Clark Blvd/Eastbourne Dr
– Scrum time will be provided shortly