Residents can post signs reminding Mississauga drivers to slow down
Police searching for people who fled vehicle after crash in Mississauga
Canadian politicians losing trust of public due to handling of pandemic: survey
Many Canadian workers paying “COVID-19 Tax” while working from home: survey
Nearly half of Canadians report receiving information they suspect is false through private messaging apps at least once per month

That is the old adage for various candidates seeking public office. You can slap up as many signs as you want, but it doesn’t necessarily mean that person or the family living in that household is voting for you.

One prime example is a homeowner that willingly gives more than one candidate, seeking the same office, permission to use their property to display their wares, such as these candidates running for the Ward 7 open council seat in Mississauga. 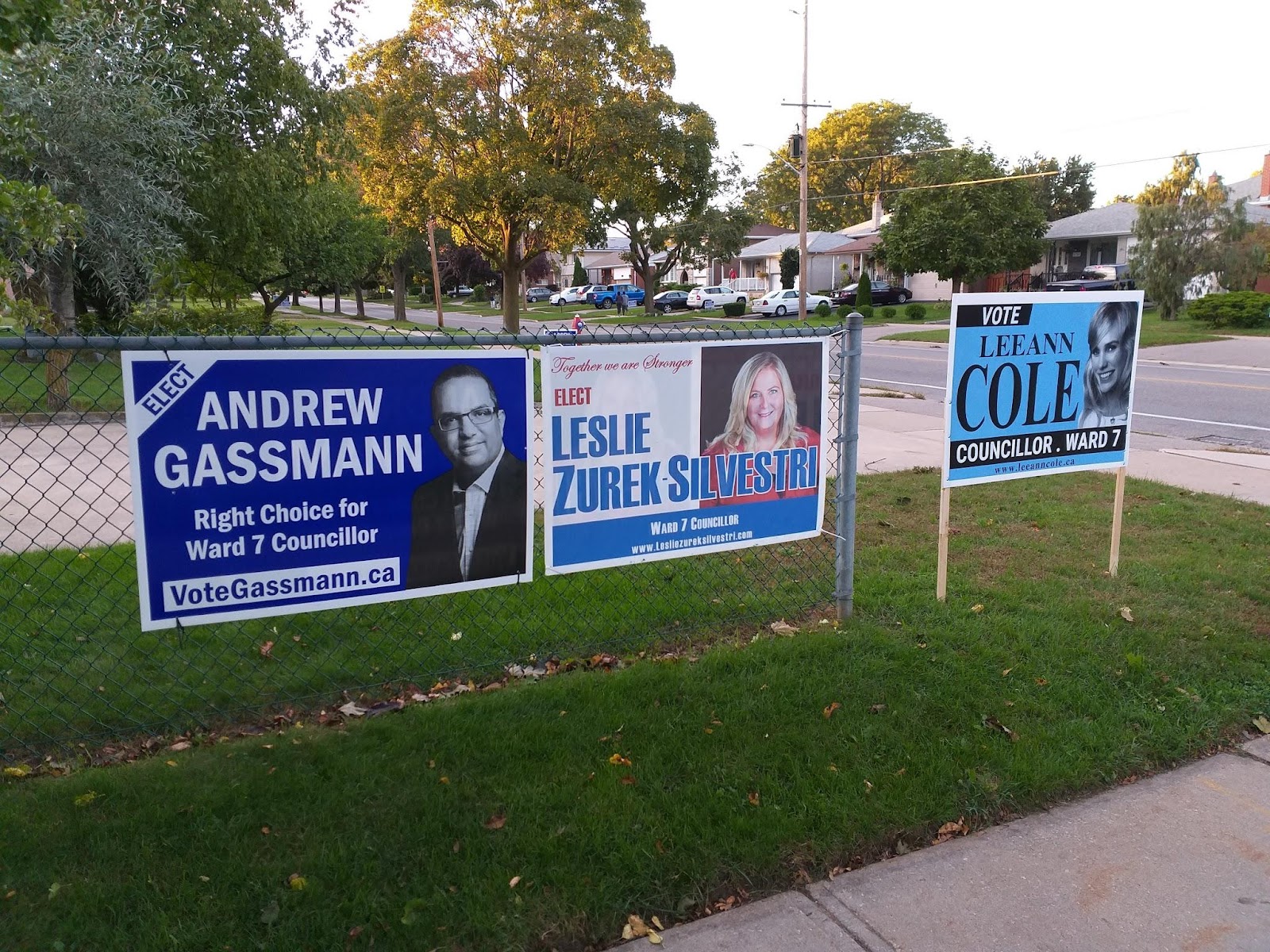 You can see that while the homeowner’s choice may be rather confusing, the signs are still on his property line and he has the right to put however many signs as he wishes.

But there are others who are blatantly putting signs on what is clearly city owned land, which technically isn’t allowed. In certain neighbourhood intersections, as pointed out by Ward 6 candidate Elie Diab, some candidates have been taking liberties with the lax by-law enforcement in Mississauga. A political associate of mine who has volunteered on previous elections used the term “shennanisigns,” to describe signs that pop up seemingly out of nowhere.

Still, there are other quirky ways to have fun with signs that does not break the law. But then there are just “signannegans,” or funny ways to throw shade at opponents, as depicted below from a volunteer with Ward 6 candidate Gary Gu. 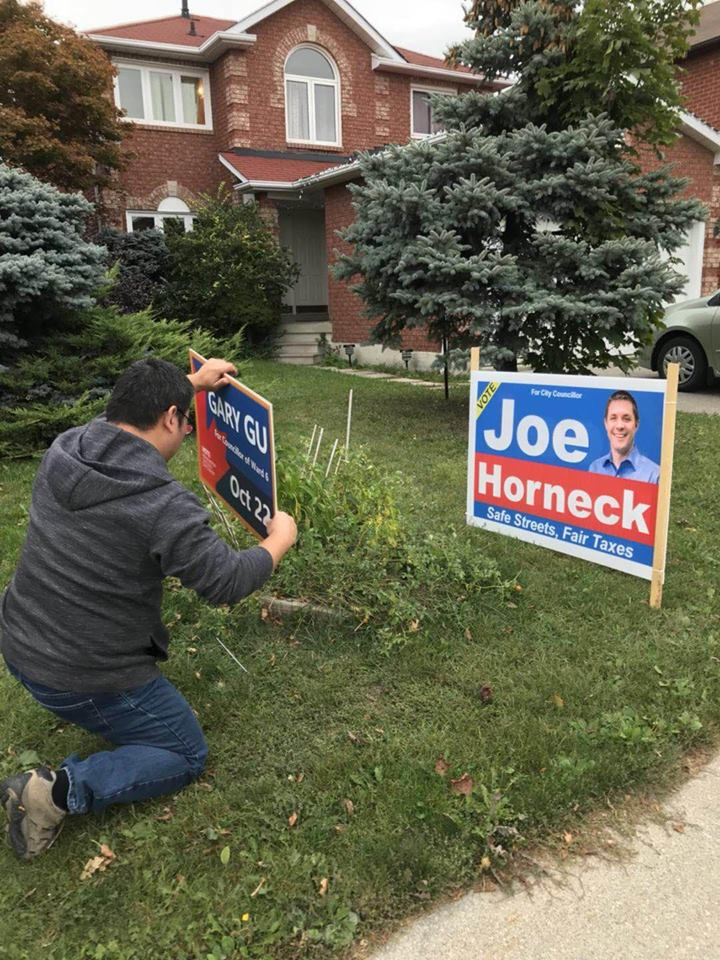 This example was previously already seen, but notice he carefully places the sign adjacent, not blocking, the large Joe Horneck sign.

It’s almost like the smaller Gu sign is saying, “hey don’t forget that there is a third option if you’re not sure about this Joe guy or don’t like incumbent Ron Starr.”

All in all, this is more fun and games than anything malicious, which is not the adjective to describe what happened to signs belonging to Ward 4 candidate Grant Gorchynski recently.

Thank you @KateTheBeta for highlighting the desperate and low-class tactics of a candidate in #Mississauga #ward4
Considering there is only 1 candidate with signs everywhere, you don't have to be Sherlock Holmes to figure this one out. https://t.co/OG7CP6DRpP

Another Ward 4 candidate, Nawres Fouad, said her signs have been stolen as well.

This is so sad. Most of my signs have been stolen too. I asked the residents of Ward 4 they dunno who removed the signs from there properties.

So it seems that Ward 10 candidate Mazin Al-Ezzi isn’t the only one who is claiming that his election signs are being “destroyed beyond belief,” and “damaged to the max.”

The incumbent in Ward 4, John Kovac, denies any involvement in sabotaging his opponent’s signs, as he stated in an email to insauga.

“Neither myself or any member of my team would have been involved in this type of activity. Not our style. I always ask for permission prior to placement of signs and have not installed any signs on city boulevards (which is not allowed), which it would appear, others may have done,” Kovac said.

At least in Ward 1 it seems to have been respectable thus far. There’s this one large property currently being developed at Cawthra and Atwater that has welcomed virtually every candidate running for election to have their signs up. 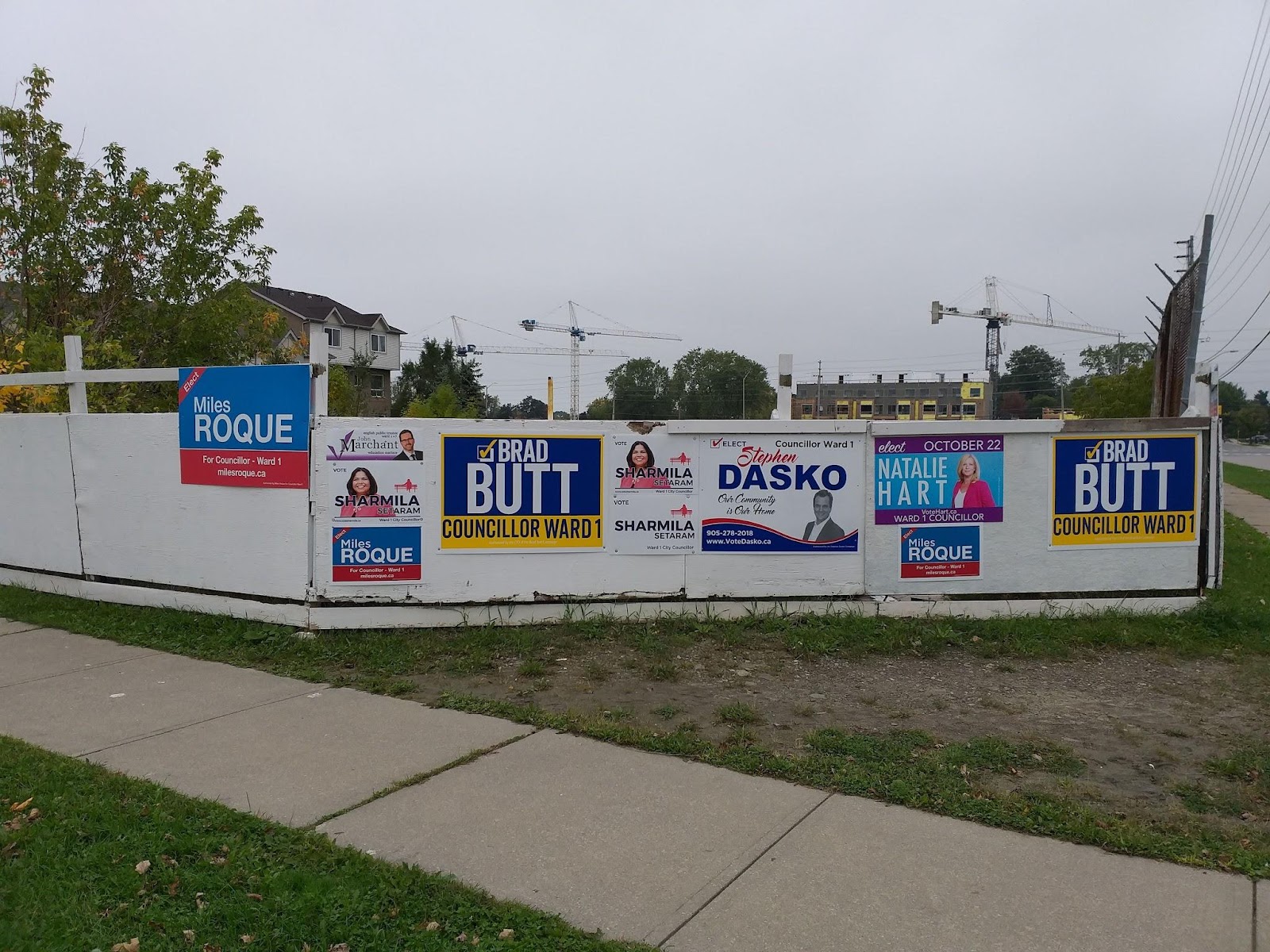 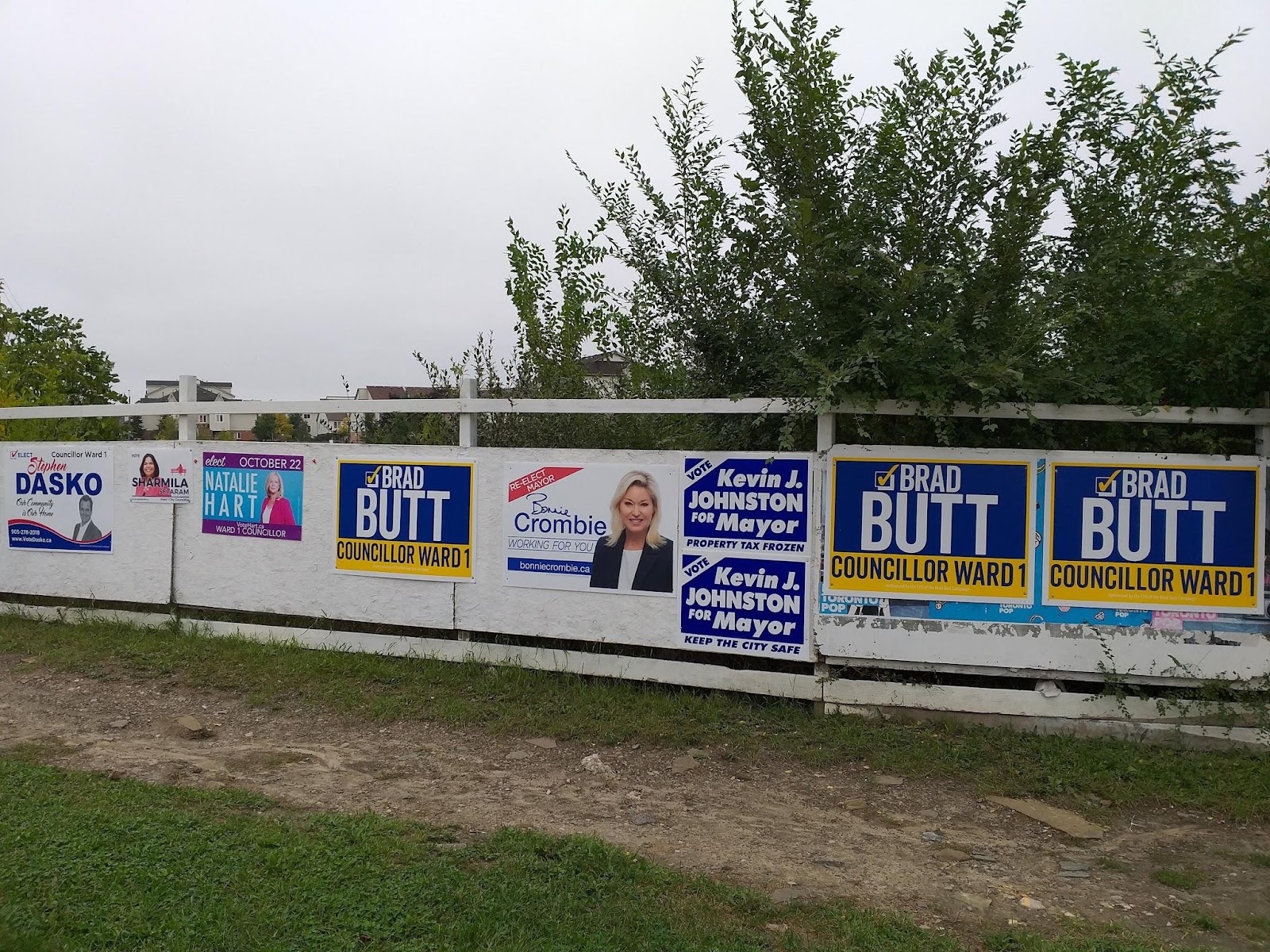 Commercial property owners can give permission to do so, which is why you may see election signs around several strip malls in Mississauga.

At the end of the day, if you’re not sure why a sign happens to have sprouted up in your front lawn, call Mississauga 311 and have someone remove it if you never gave permission. It’s your property after all.

Signs should start coming down after October 22 when the election concludes, so only a few weeks left of dealing with them anyway.

If you need some additional advice on how signs reflect a candidate’s support, check out this thread:

Be very weary of candidates who only have signs on main streets. If you must get obsessed about signs, look for the candidate with coverage on cul-de-sacs and balconies. That takes a lot of work.#topoli

Popular Toronto Thai restaurant opening a location in Mississauga
Mississauga’s newest Thai restaurant, Mo Thai, is coming to Cooksville before the end of May.
END_OF_DOCUMENT_TOKEN_TO_BE_REPLACED