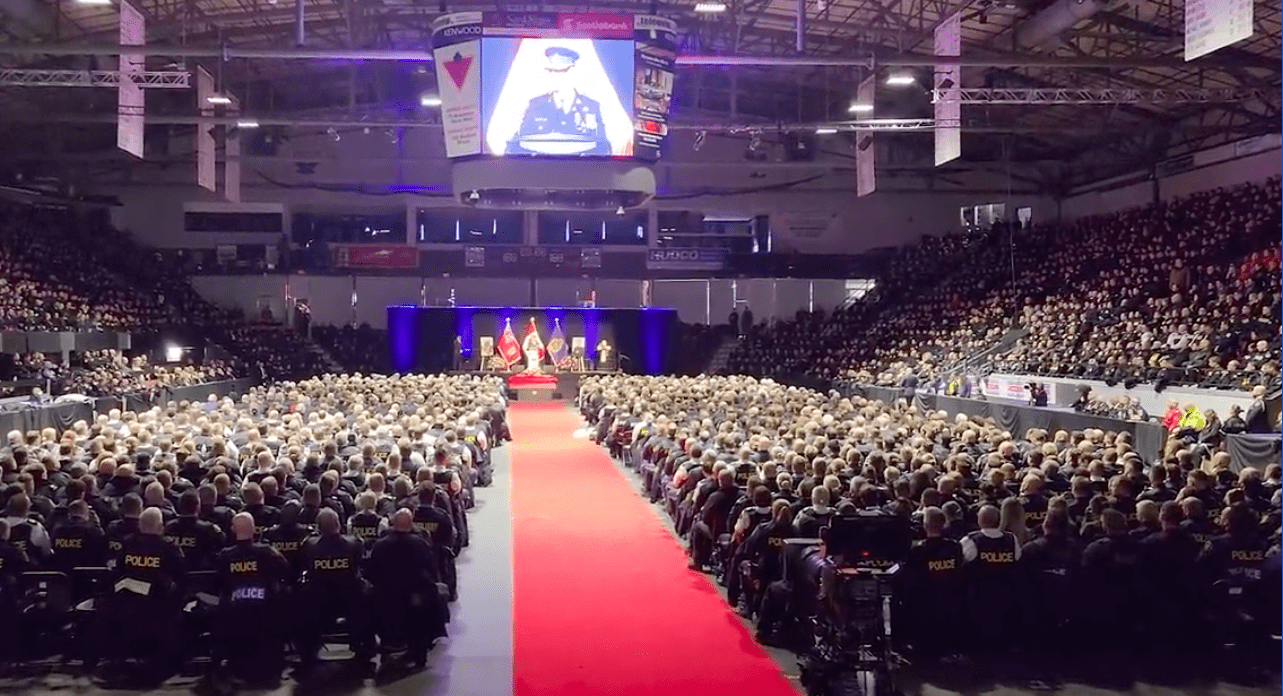 Police services and dignitaries from across Ontario gathered in Barrie today to honour the life of OPP Cst. Grzegorz (Greg) Pierzchala, who was slain in the line of duty just days after Christmas.

Pierzchala, age 28, had been with the OPP for a year as of December 27. Earlier that day he learned he had just passed his employment probation period.

Around 2:30 p.m. that day, Pierzchala responded to a call at a remote road near Hagersville, west of Hamilton, regarding a suspected stolen car. When he arrived at the area the Chevy Silverado pickup was seen gunfire erupted leaving him with critical injuries.

Pierzchala was rushed to the hospital where he succumbed to his wounds.

Later that evening OPP Commissioner Thomas Carrique confirmed Pierzchala was at the scene very briefly before he was shot and did not fire his own weapon.

“The officer was essentially ambushed and stood absolutely no chance of being able to defend himself,” Carrique said.

Following a large procession, Pierzchala’s private funeral was held on January 4 in his hometown of Barrie. It was attended by hundreds of his fellow officers from across Ontario, members on the Canadian Armed Forces and Premier Doug Ford.

To everyone who came to pay respect and honor the life of OPP officer Greg Pierzchala – Thank you.

Grzegorz "Greg" Pierzchala – "I think the real testament of someone who has lived an honorable life is how many people show up to their funeral, to their wake." #HeroesInLife pic.twitter.com/5duMKwV9q7

“Greg was just about the most decent human being out there. I don’t think it can be said enough the magnitude of the man he was. The kind of person he was. The way he respected people, not only in the office, but also the people that he served in the community,” said one of Pierzchala close follow OPP officers during the procession.

Today, we gathered to honour the life of Cst. Pierzchala. @PeelPolice and the entire policing community share the grief in this devastating loss. Our thoughts remain with his colleagues at @OPP_HSD, his family and all those impacted by this tragedy. #heroesinlife @OPP_NEWS. pic.twitter.com/ZZu4kkpwXb

“I am truly humbled to wear the same uniform as Greg,” said Carrique in his address to the crowd.

Today @DRPS members stood with our brothers and sisters across the province to pay tribute to #OPP Constable Grzegorz (Greg) Pierzchala who was senselessly and tragically killed in the line of duty. He will forever be a hero. #heroesinlife pic.twitter.com/ozMxe9SZrv

Honoured to be joined by over 200 @NiagRegPolice members, sworn and civilian, who came together this morning to stand in support and grieve the death of #OPP Constable Grzegorz (Greg) Pierzchala.#HeroesInLife pic.twitter.com/q6mJErR61i

Two people, Randall McKenzie, 25, and Brandi Crystal Lyn Stewart-Sperry, 30, stand accused of first-degree murder for Pierzchala’s death. McKenzie had previously been convicted of armed robbery and assault with a weapon.

He had been banned from owning any weapons since 2018, but gained additional firearm charges in 2021. At that time he was also charged with assaulting a police officer. He was out on bail when Pierzchala was killed and a warrant was out for his arrest due to a missed court date.