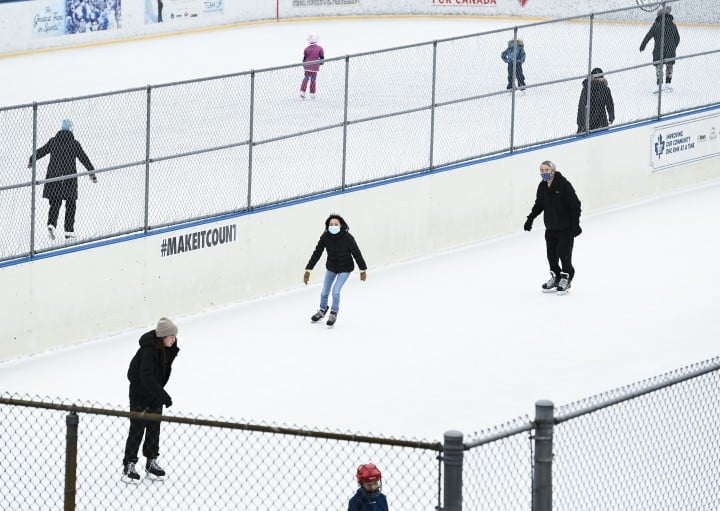 TORONTO — Confusion swirled in Ontario about the province’s anti-COVID-19 stay-at-home orders, as many residents feared they’d be stopped by police or see officers force their way into homes as part of a crackdown.

New regulations mandate people to remain at home, but there are 29 exemptions that include going for groceries and exercising. No indoor gatherings with those outside a household are allowed and physically distanced social gatherings are limited to five people outdoors.

The Canadian Press asked for clarification from the government and police.

What powers do police have?

A spokesman for the province’s solicitor general said the new orders do not give police the power to enter homes to check for compliance, nor can officers pull drivers over or ask pedestrians where they’re going.

“On its own, being outside is not sufficient evidence of a failure to comply with the stay-at-home order,” Stephen Warner said.

“Workers are also not required to have proof from their employer that they are travelling to or from their workplace.”

How will police enforce the new rules?

The Ontario Association of Chiefs of Police confirmed officers will not be stopping people only to ask about the stay-at-home orders.

“Individuals cannot be compelled to explain why they are out of their residence,” spokesman Joe Couto said.

“When people understand that our officers are not going to be looking for people who happen to be out like me walking my dog, I think they will then feel a lot better. Simply getting into their car and going to the grocery store wondering if they’re going to see the lights in their back windows is not going to happen.”

“Enforcement will be an option when responding to calls relating to the order, and/or public gatherings,” said Const. Sarah Patten in an email.

“However, every call for service will be evaluated individually and the appropriate action will be taken for each.”

What will police not be looking for?

Couto said police will not be setting up checkpoints to check for COVID-related violations.

“One of the primary reasons is we have a lot to do,” Couto said. “Beyond enforcing this, we still have to prevent crime, we still have to address crime when it does happen. Our officers are pretty busy — we’re not looking for more business.”

What will police be targeting?

“We’ll have a more intentional effort to find those,” he said.

“What I’m talking about is people who gather, for instance, in a parking lot and there’s suddenly 20 people standing around the car, our police officers are going to go and they’re going to simply say, ‘Why are we gathering here?’”

What are the penalties?

Couto said the new rules allow officer discretion. They might simply tell a gathering of seven or 10 people to break it up and go home.

Fines can be issued for non-compliance.

The Provincial Offences Act has been updated to include new offences with set fines:

— Fail to comply with an order made during a declared emergency: $750

— Obstruction of Person exercising a power in accordance with an emergency order: $1,000

— Obstruction of Person performing a duty in accordance with an emergency order: $1,000