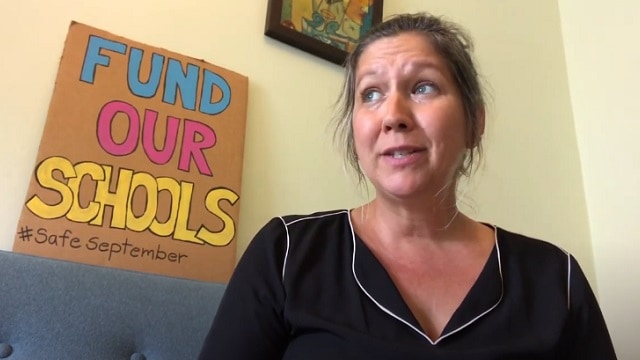 Since the province unveiled its school reopening plan in July, a number of people have expressed their concerns, including education workers who feel like their safety and the safety of their students is at risk.

“Parents and the public have heard a bunch of announcements from this government with lots of big numbers and even larger promises,” says Sarah Vance, an organizer with OEWU.

“We want to cut through the Ford government’s deceptive spin and talk about the specific dangers students, their families, and education workers face under this government’s reckless school reopening plan.”

One such education worker is Kindergarten teacher Tara Wannamaker, who says she’s supposed to have 29 students in September.

“With that many students, I won’t be able to keep them safe,” Wannamaker said. “We all want to get back to school, but Doug Ford’s reopening plan is not safe for me, my students, or our communities.”

These sentiments were shared by adult day school teacher Deborah Buchanan-Walford, who says the windows don’t open in her building and the ventilation systems are in bad condition, leading to an unsafe learning environment even with only 15 students in a class.

The education workers end their videos with a plea for residents to call Premier Doug Ford and demand a fully funded reopening.

“We are scared, but more than that, outraged that Doug Ford and Stephen Lecce would be so careless with the lives of our students, their families, and all education workers,” says Vance. “We want schools open, but we can’t open them until they’re safe for everyone.”

The videos can be seen here, here, here and here.

But high school students at two dozen boards — including the Toronto District School Board — will only attend class half the time, with a maximum class size of 15.

The OEWU describes itself as a grassroots group of education workers across Ontario fighting for a strong, publicly-funded K-12 education system.

Photo courtesy of Tara Wannamaker and the OEWU; with files from the Canadian Press