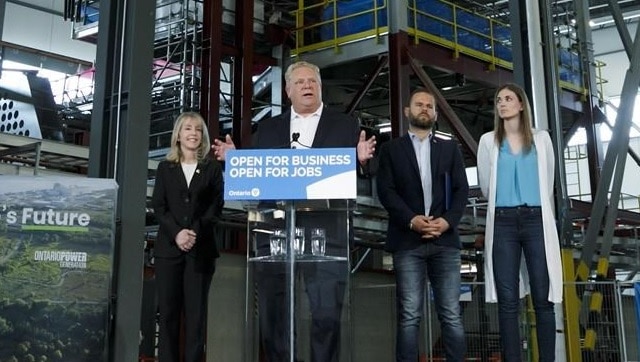 Lindsey Park, far right, is the member of provincial parliament for Durham. (The Canadian Press)

Durham MPP Lindsey Park has lost her parliamentary assistant role in the Ford Government due to misrepresenting her COVID-19 vaccination status.

Government house leader Paul Calandra said in a statement on Friday that Park will no longer serve as parliamentary assistant to the attorney general.

Ontario Premier Doug Ford has said that all members of his Progressive Conservative caucus must be vaccinated. He removed longtime Chatham-Kent-Leamington representative Rick Nicholls for refusing to get vaccinated.

However, Calandra says Park will remain in caucus because she has provided a medical exemption.

Park, who represents Durham, is Ford’s second caucus member with a medical exemption, along with Scarborough Centre representative Christina Mitas.

The base salary for an MPP is $116,500, and a parliamentary assistant to a cabinet minister is paid about an extra $16,600 annually.

Park made headlines in April 2019 when a car she was riding in bumped into protesters as the driver tried to enter the parking lot of the Ajax Convention Centre for an Oshawa Chamber of Commerce event. The protesters included union workers from the Ontario Public Service Employees Union (OPSEU), Canadian Union of Public Employees (CUPE) and people decrying changes to the Ontario Autism Program.

Her statement after the fact said, in part, ” I should have handled the situation differently.”