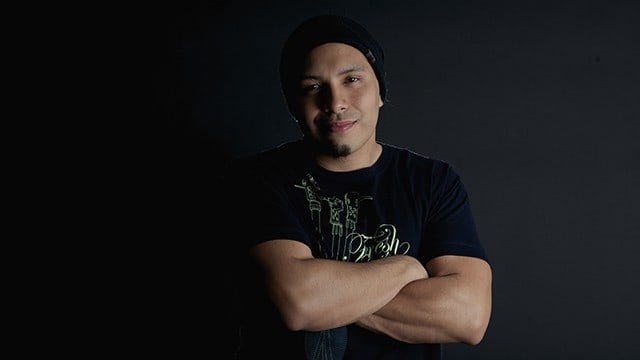 Editor’s note: Big congrats to D-Smooth for winning the Red Bull Thre3style DJ competition this past weekend on July 12, 2014. Now he’s off to Vancouver for the National Finals! Listen to his set that got him the win>

We recently caught up with Mississauga’s own DJ D-Smooth that was last year’s finalist for the Red Bull Thre3style DJ competition and is going for it again this year.

What is your Mississauga connection?
Born and raised in Mississauga. Spent my first 26 years of my life there.

Where/how/who/when did you guys get your DJ name?
I started spinning in grade 9 in high school and went through a few names. Picking one was a big deal so it actually took me a while to get settle on D-Smooth. I do not actually recall the moment I chose my name, but I do remember that my decision was based on the fact that a lot of people already called me “D” for short and as well some people described my DJ style and transitions as “smooth”.

Can you remember your first few vinyl purchases and from where?
My first record I bought was Jay-Z’s Reasonable Doubt album from Traxxx in Mississauga.

Tell us how you got involved with the Red Bull Thre3style competition?
I’ve always been a fan of the competition and up until last year it was invite only and I was never invited to compete. However, last year Red Bull opened up the competition to any DJ that submitted a mix and a panel of DJs would select who they wanted to compete based on the mix submission. I was fortunate enough to get selected.

How was the experience? Are you competing again?
To say the experience was great is an understatement. It was the most stressful but most accomplishing thing I’ve done as a DJ and placing second my first time competing was just the icing on the cake. This year I have been selected again to compete and it is going down at The Hoxton on July 11th, 2014. See you there?

Either playing for parties or playing at a club, when was it that you realized that you wanted to DJ for the masses?
I realized early in my career that I wanted to play for the masses. I think it was the natural high I get from making people dance that really made me fall in love with this art.

Did you have any DJ mentors in your early days?
Yes. Djs, Real, 8Ball, and Knowledge all had a part in mentoring in my early DJ days. From schooling me on beat matching, to learning from watching them spin, to bringing me to parties, lending me records and equipment, and to helping me get gigs. They were a big part of my early days of DJing.

What is the coolest place you have spun in the world?
I still think spinning at the Guv for Red Bull Thre3style was one of the dopest spots I’ve spun at.

Favourite place to spin in Mississauga, past and present?
Though it’s not around anymore (sadly), Fogo will always be my favourite spot in Mississauga / Oakville that I’ve spun at – for now 🙂

What is the most annoying thing anyone can ask when you are in the middle of spinning at a party?
I hate when people get demanding by either constantly request the same song over until I play it, or when they expect me to play their song that very second. Or one thing that I really get annoyed with is when someone asks me for something I don’t have. Then they suggest I connect to YouTube so I can play the song.

Is there that one song that you refuse to spin?
To be honest, if the song matches for the crowd and vibe of the party I will play it. My job is to make people dance and if that means playing a particular song I don’t really care for, I will still play it. It’s usually when a request is so left field from what the vibe of the party is that I will refuse to play it.

Any advice to an up and coming DJ or a kid that is thinking of getting into it?
DJ because you love the art and music. Not because of the lifestyle, or money. But also, know your worth and do not let other people take advantage of you.

What high school did you go too?
– St. Francis Xavier

Favourite place to eat in Mississauga?
– Peter’s on Eglinton

Do you have a podcast?
– Yes you can reach my podcast and other mixes at www.upjumpsdaboogie.com

Anything you want to plug?
– My website, the hub for my mixes and my social media www.upjumpsdaboogie.com
– My side project / videocast www.boogiefreshlive.com
– And my teams Inner City Cartel www.innercitycartel.ca and The GoodTimes!Group www.thegoodtimesgroup.com