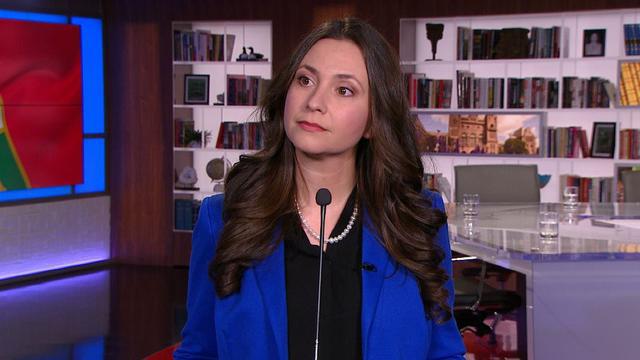 In what has been an unprecedented series of events in Mississauga concerning the Ontario Progressive Conservative Party, a prominent candidate in one of the city’s ridings, who months ago was contesting for the party leadership, has now been disqualified to run to become an MPP weeks after she won the party’s nomination.

Tanya Granic Allen became the PC candidate in Mississauga Centre on April 21, when the riding’s nomination was reopened after the party declared that ‘irregularities during the process’ were discovered. But after a series of controversial remarks Granic Allen said in the past surfaced, PC leader Doug Ford released this statement on last Saturday:

The “characterization on certain issues and people” that was deemed irresponsible was in reference to the comments Granic Allen made about hijabs worn by Muslim women, comparing them to ninjas or bank robbers.

If that wasn’t already bad enough, the Liberals released video of Granic Allen giving her views on gay marriage, abortion, and the issue she is most known for, sex education. The transcripts of what she said are in the following tweet:

Mere hours later Ford announced that the runner up to that April 21 nomination meeting, registered nurse Natalia Kusendova, would now be the PC candidate in Mississauga Centre. But it’s not as though Granic Allen herself will now go off quietly into the night. 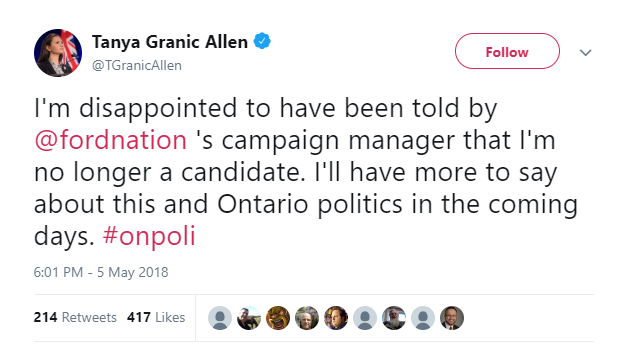 Where do you even start with this story?

Forget the fact that Granic Allen actually lives in a village outside Owen Sound and had a tepid connection to Canada’s sixth largest city at best, the members of her party voted in the nomination and duly selected her. It’s highly unlikely there were irregularities in the second nomination, otherwise Ford would not have picked Kusendova as the candidate just because she was the runner up.

But if that was the candidate Ford preferred anyway, why allow Granic Allen to go through the nomination process at all? Her controversial remarks came out during the nomination campaign when candidates were still hustling for votes from registered party members in Mississauga Centre. Ford could have disqualified her before the vote took place, but he didn’t and allowed the “voters to decide.” Now apparently that is not the case.

I suspect that Ford’s advisers reminded him that Stephen Harper lost the 2004 election because some of his candidates during the campaign went off script and said things that scared away enough votes from the party, and thought it best to clamp down on the problem before it festered during the election campaign.

But this appeared poorly handled from a political and logistical aspect. Granic Allen is not only a former leadership candidate; her supporters heavily backed Ford as their second choice. Unless the losing candidate for the leadership chose to leave on her own terms (at least in the open), this kind of thing has frankly never happened.

This might also show some voters that Ford, the man who was known in Toronto City Hall as a bit of a steamroller, can be swayed (or will “flip flop”). Ford got into trouble last week when he was filmed during a meeting with party members saying he would allow development on the Greenbelt, and later recanted that idea when the video came out.

With another video comes out and makes Ford change his mind again, you may start wondering if Ford actually stands for something. Say what you will about Rob Ford, I think he would have just dismissed these controversies and plowed on ahead.

On the other hand, perhaps these are signs that Ford is maturing a bit as a political candidate, and showing that he understands what is needed for an Ontario PC Party in 2018 to actually win an election. And he’s going to need some political adeptness; the Liberals after 15 years in power are showing they will do what it takes to win, and they’re digging up every little bit of information they can to use against Ford. If you thought previous provincial elections were tough sloughs, what we’re about to see may top them all.

Another caveat is that Granic Allen has proven, at the very least, that she is not the type of person to stay quiet. She is very vocal about her views on social media and in public, and I wouldn’t be surprised if she aligned herself with one of the smaller conservative parties running in this election whose members feel spurned by the established Tories, such as the Trillium Party.

For now, the saga of the Tanya Granic Allen odyssey into Ontario and Mississauga politics is over. But I’ll leave the last word to the federal MP for Mississauga Centre, Omar Alghabra, who summed up this entire situation with a great one liner:

She hasn’t even had a chance to learn where Square One is! https://t.co/NBkxpl7dXm